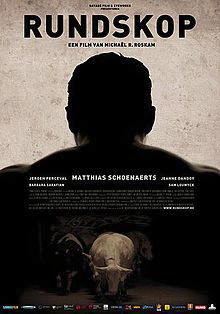 he directorial debut of Belgian writer-director Michael Roskam, Bullhead (Rundskop in the original language) (2011) has the atmosphere of Gommorah (2008) and the character depth of Bronson (2008), all with a powerful aesthetic that demands seeing to believe.

Whether through wide angle shots of a pristine skyline or through ultra-close-ups of pivotal characters obscured in shadow, Bullhead elegantly recreates the shady underground of Belgian hormone trading in the mobbed-up meat industry, a world where nothing is what it seems and every beautiful moment is merely an opening for further hardship and chaos.

Matthias Schoenaerts stars as Jacky Vanmarsenille, a musclebound cattle farmer who, along with his brother and through the help of an unscrupulous veterinarian, enters into a less-than -reputable business deal with west-Flemmish beef traders.

However,  when a police officer responsible for investigating Belgium’s beef mafia ends up dead and on national  television, an event followed shortly by Jacky’s chance meeting with a mysterious woman from his troubled youth,  Jacky tries to back out, setting into motion the torrent of violence which until this point in the movie has only been depicted through flashbacks to Jacky’s troubled childhood.

Although somewhat over-plotted and clunky— a curse of neo-noire films ever since Brick (2005) applied the formula to a group of high school drug dealers—the film’s true brilliance shines in its study of Jacky as an ultra-macho, emotionally scarred hormone abuser, artificially bulking himself up with steroids while simultaneously injecting his cattle.

Consumed with rage and a desire for revenge, Jacky is artfully captured by Roskam and his cinematographer Nicolas Karakatsanis at the character’s most physically formidable and emotionally weak states, humanizing the brooding bruiser as a damaged figure incapable of reconciling his former humiliations with his tough guy persona.

This deeply personal tragedy underlies the otherwise formulaic crime procedural and compounds as the overt plot comes to its conclusion, rendering Jacky’s agony both ultra-machoistic and completely human.

Whether obscured by shadow or merely in movement, ranging from subtle ticks to storming out of his first meeting with the meat traders, Schoenaerts consistently portrays the inner turmoil that stems not only from Jacky’s moral conundrums, but also from the feverish intensity of the addict. He gives only glimpses of the struggle through his largely neutral mask.

As Jacky breaks down over the course of the film, Roskam’s foreshadowing aids Schoenaerts in being simultaneously larger than life and impotent in the face of the circumstances of his own addiction, illuminating the paradox of traditional masculinity in a refreshing, compassionate manner.

Although most of the details of the Mafia intrigue are only conveyed through the knowing gazes and intentionally vague conversations familiar to any crime film aficionado, the tension Roskam escalates through the piece compensated so thoroughly that the audience never wants for structure.

The shady mafioso deal and the seedy world that Roskam’s characters inhabit serve as McGuffins for Schoenaerts’ performance. The beautiful wide angle shots of the Belgian landscape and the blurred, shadowed shots of characters in action create a decidedly contemporary aesthetic wrapper for Jacky’s personal, muted sorrow.

Moving, tragic flashbacks abound as we discover Jacky’s violent genesis. Often in slow motion to emphasize their traumatizing effects on the young boy, the scenes serve as the film’s only exposition, ranging from earlier moments outside of Belgian brothels and Jacky learning how to inject cattle with DES (Diethylstilbestrol, an illegal growth enhancer) from his father, to being viciously assaulted by a gang of boys led by the son of the hormone supplier.

Ultimately, the cast of characters that orbit Schoenaerts are never fully fleshed out and remain ancillary to the Bronson-esque character study of Jacky’s emotional decent.

However, the film’s intensity, boldness and non-typical subject matter—given neo-noire’s tropic reliance on the recreational drug trade—merit multiple viewings of the film.

Belgium’s official nomination for the Best Foreign Language Oscar (see The Trail’s review of the winner, A Separation, in the February 24 issue), Roskam’s Bullhead heralds its director as a powerful new voice in the nascent genre, and Schoenaerts as an invaluable talent that the Belgian film industry cannot afford to ignore.