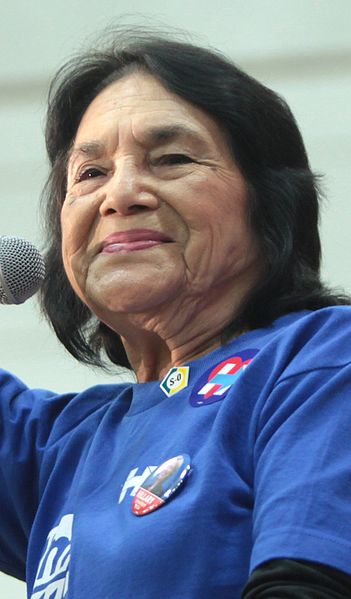 Dolores Huerta speaking at an event in Phoenix, Arizona in 2016. — Photo credit to Gage Skidmore

Dolores Huerta might be the most influential American labor and civil rights activist that you haven’t heard of. Seeking to correct that oversight, student-group Latinxs Unidos reached out to the rest of the campus community last Saturday and Sunday in the form of a film screening.

The 2017 film “Dolores” by Peter Bratt covers the life and work of Dolores Huerta, a co-founder of the National Farmworkers Association, an instrumental leader in the Delano grape strike in 1965 and a fighter for Latinx and women’s rights to this very day. Huerta’s contributions to Latinx and labor rights have been largely dismissed and minimized within the shadow of César Chavez.

“People might’ve learned about César Chavez — but more often than not people don’t know who Dolores Huerta was,” President of Latinxs Unidos Soli Loya-Lara ’20 said. This is the largest-scale film screening that Latinxs Unidos has ever put on, since they usually do small movie nights only for themselves.

“It is important to share this part of history with people. Because I think, a lot of times, Latinx history in the U.S. is relegated maybe to a paragraph,” Loya-Lara said.

This is an important theme discussed in the film, especially towards its conclusion when the documentary turns to more recent events in Huerta’s life, including a comment about Republican apathy towards Latinx people that led to a ban on ethnic studies in the state of Arizona.

As with many films, the opening scenes operate as a thesis statement. In “Dolores,” the opening shots follow Huerta as she walks to and from different engagements, always shooting her from behind. This showcases Huerta as a woman at the forefront, a woman who leads and a woman to be followed.

Latinxs Unidos is a relatively young club on campus working to expand their reach and visibility at Puget Sound.

“The most recent form of our club started in 2014 as CHispA (Community for Hispanic Awareness) with only three students. In 2015 we changed the name to Latinos United for Culture and Education, and now we’re Latinxs Unidos and we have grown exponentially,” Loya-Lara said.

In these early years, the group is focusing both on harboring a strong community within themselves, as well as being an active member of the community at large.

“It’s about just being able to create a community for Latinx students on the campus. Within the last year, we’ve been working really to listen to what our members are saying that they want — really trying to open up spaces where people feel like they can be comfortable coming in and talking about things that are important to us,” Loya-Lara said.

The screening of “Dolores” is a largely intersectional invitation to interact with and acknowledge the Latinx community on campus. Huerta’s story can appeal to anyone interested in social justice, and Loya-Lara said that when organizing the screening, Latinxs Unidos reached out to multiple departments on campus, including the history, gender and queer studies, and sociology and anthropology departments, to advertise because they felt the film offered such a large landscape of relevant ideas and themes.

“I think doing things like this is important for us to show, ‘Hey, we’re on campus, and these are the things we can share with you and we’d love for you to share with us in the same way,’” Loya-Lara said.

The film is an inspiring look at an incredibly influential, powerful human being who deserves an immense amount of recognition. Latinxs Unidos utilized the “Dolores” film screening to showcase themselves and this incredible woman to the Puget Sound community.

If you’d like to get involved in Latinxs Unidos, they hold meetings every Thursday at 7 p.m. in the Student Diversity Center.