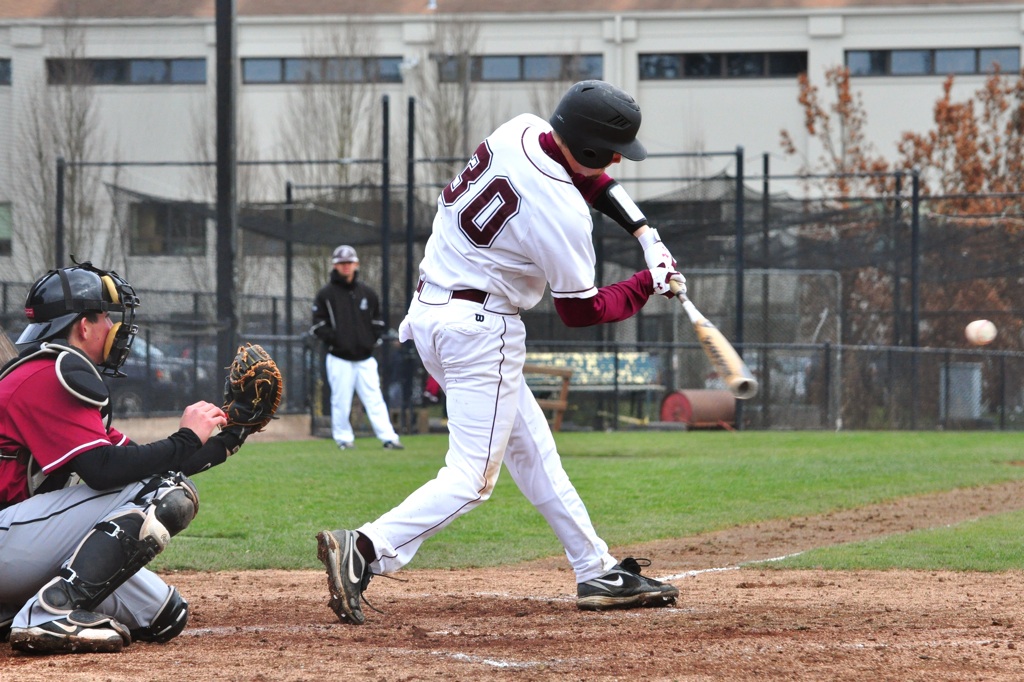 After a tough weekend at Whitman, dropping two out of three games to the Missionaries, Puget Sound baseball head coach of ten years Brian Billings was ready to get back on the practice field.

“We just want to get back to work,” Billings said.

It appears the Loggers certainly have work to do. They currently sit in 6th place in the Northwest Conference, with an overall record of 3-9-1. According to Billings, the problem is not singularly improving the hitting or pitching, but putting the two together on a consistent basis.

“We have got to keep working hard and hopefully we will put it all together,” Billings said. His sentiment was echoed by senior infielder Will Mentor (Seattle, Wash.).

The Loggers have shown flashes of both great hitting and pitching, with Sunday’s finale a prime example of solid pitching. Lucas Stone and Luke Englert combined for 8 innings of work.

While the Loggers lost 4-2, the pitching remained strong. Three of Whitman’s runs came on a home run by Kyle Moyes, capping off a four-run fourth inning.

That was all the Missionaries would need, as the Loggers could only muster up two runs in the fifth, their only journey to the scoreboard that game. The runs came on back-to-back singles by freshmen Jake Boley (Gig Harbor, Wash.) and Connor Savage (Bothell, Wash.).

Savage drove in four runs over the weekend, three in the Loggers 8-6 victory in the second leg of Saturday’s double-header. The eight runs were the third highest output by the Loggers in the 2012 season. However, that total easily surpassed the run totals of the other two series games combined.

In the first game of the back to back on Saturday, the Loggers only managed one run on six hits.

“The hitting is okay. We haven’t been able to hit in key situations, so we have had lower scoring than in the past,” Mentor said.

Mentor elaborated that the team’s hitting ability is there, but that translating those hits into runs has been difficult.

“Once we get guys on base, we’ve really struggled getting them across the plate,” Mentor said.

While they have had their share of on-field struggles, the Loggers haven’t let that impact their team dynamic.

“The team chemistry is really good. Everyone wants to succeed for the other guy,” Mentor said. He also said that this appears to be contributing to players trying too hard to come up with big hits.

Regardless, both Billings and Mentor remain hopeful for the rest of the season.

“We have to start playing well. We aren’t too focused on where we finish. We’re more focused on playing good baseball… It is a long season so we have some time,” Billings said.

“We are really going to work hard. We need to make sure that every rep we get [in practice] is quality. We can’t look to any opponent, we just have to look within ourselves,” Mentor said. The senior said that with hard work and continued focus in practice, the Loggers will be able to step up their game.

Next weekend the Loggers will host Whitworth, looking for their first series win of the young 2012 season. Once that win comes, and the team gets “…the ‘monkey off our backs’, look for the Loggers to hit “the ground running,” Mentor said.

The Loggers will also be on the road over Spring Break as they participate in the California Inivational Tournament hosted by Cal Lutheran.  The Tournament begins March 14.