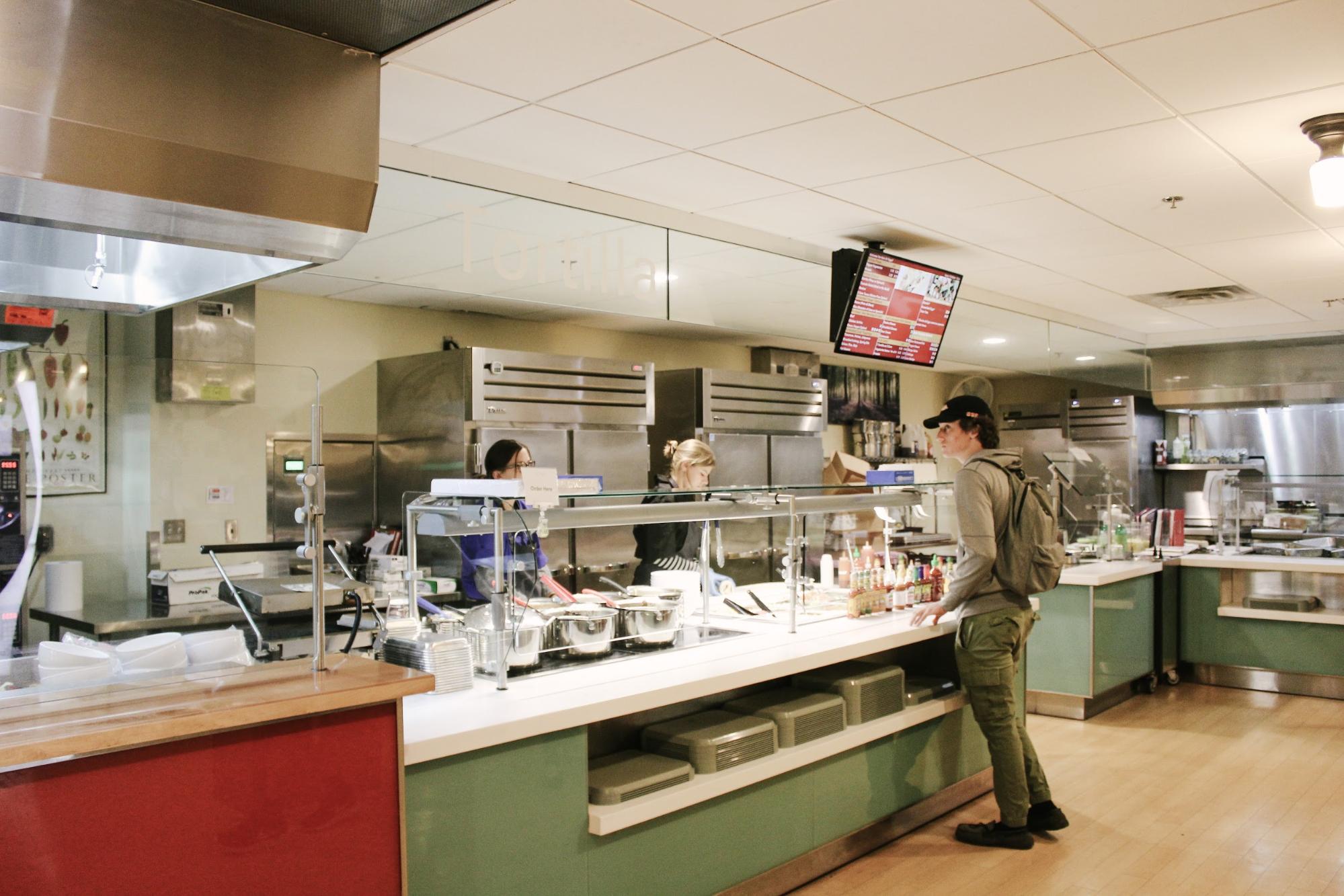 A student orders from the newly renamed Tortilla station in the Diner, which used to be called Latin station. Italian and Asian stations have also been renamed as Pasta and Wok, respectively. [Photo credit to Claire Weckl.]

Upon returning from summer break, many students noticed something interesting about the S.U.B.: the large names above the beloved Italian, Asian and Latin stations had been changed. This year, students can enjoy an authentic burrito from the Tortilla station, or perhaps stir fry from the Wok station or, if you’re feeling really original, some pasta from the Pasta station.

Many have found themselves puzzled and even put off by the name changes. If it were truly necessary to change these stations, we went in the wrong direction. Instead of becoming more vague about the food’s origin, the signs should more specifically reflect exactly what culture or ethnicity actually produced the food. After all, food, culture and ethnicity are inherently intertwined. Food is often a fundamental quality in a culture’s history and community.

“Over the past academic year we heard comments from various people in the campus community explaining that the food at Italian, Asian and Latin did not match the station name by means of authenticity,” Bairey said. “After hearing this feedback we agreed that the station names needed to be changed to reflect the food we are serving at these stations. We then consulted with different people and groups on campus including Michael Benitez, the Dean of Diversity and Inclusion; Latinos Unidos; as well as Dining and Conference Services full-time staff and student staff. We landed on the names ‘Pasta,’ ‘Wok’ and ‘Tortilla’ because these names are focused on the food or cooking techniques at the station rather than tying the food to a culture and people.”

Shying away from cultural or ethnic identification and celebration was not the right move on the part of DCS. In trying to be more respectful, they’ve failed to recognize the importance food has to ethnicity. Giving the stations vague names like “Tortilla” and “Pasta,” “rather than tying the food to a culture and people,” according to Bairey, seems like a microaggression against cultural pride.

Because of the power imbalance between administration and students, a decision by the administration to rename the ethnic food stations (even with input from students of color) is akin to having someone tell you how to identify. It’s like if I told a professor “I’m black,” and they responded, “No, you’re African-American.” Under the guise of political correctness, someone who holds power over me is telling me how to identify.

This issue of power would be resolved if it were solely the choice of the Latinx campus members to change the station name from Latin to Tortilla. However, the administration has the final say. The rebranding of the S.U.B.’s ethnic food stations is unintentionally insensitive to many students’ cultural experiences and identities.

Separating food from culture is blatantlty tone-deaf. It seems odd that any students or faculty of color who were consulted for this decision would promote these changes.

On that note, I understand how the Asian and Latin stations could be points of contention among Asian and Latinx members of the campus community. Neither of those words encapsulate the complexities and varieties of cultural and ethnic foods of Latin America and Asia. And, realistically, neither could our dining hall. But I would absolutely love to know which Italian campus community members felt uncomfortable and wanted the Italian station changed to “pasta.” It seems as though nothing can be done with regards to race on campus without some higher-ups throwing a bone to white people: “Sure, we’ll change the Asian and Latin (two broad descriptors that don’t always apply to the food served) station names, but that means we should change the Italian too, since race is involved.” (Italians are white).

While it’s true that the food served at the Italian station is “Americanized” in its taste ­— cheesy bread, spaghetti and meatballs, pizza, and so on — there is no doubt about the origins of pasta. It is Italian food, plain and simple. Even if it’s not prepared the same way, and there’s no doubt that the food served at our Pasta station is Italian both in inspiration and in nature, so the name change is still nonsensical.