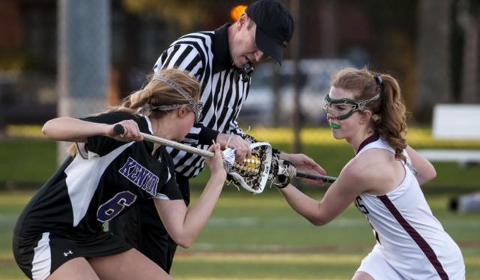 The women’s lacrosse team opened up their season on Saturday, Feb. 28 with a loss on the road at Pacific University.

Alter and Frazer earned their first starting appearances of the year and Krietzman notched herself a goal in her debut.

Paskett transferred schools at the end of the 2014 season. Though often coming off the bench, Paskett provided good support for current goalkeeper Hailey Palimore (Tualatin, Ore.), who played all 60 minutes on Saturday.

Alongside Paskett’s exit, junior Haley Jackson’s (Seattle, Wash.) contributions were missed in the season opener for the Loggers.

In the 2014 season, Jackson slotted in as the fourth most productive player with a total of 35 points.

Among her contributions, she ranked second on the team in assists (16) in the 2014 season.

Also weighing on the shoulders of the women’s squad for their first game was the absence of their star player Olivia Keene (Whitman, Md.) as she was sidelined with chronic shin splints.

“I was pretty upset at first but was able to find my place on the team as a part of the sideline support system,” Keene said.

She was one of three players alongside Maddie Soukup (Ballard, Wash.) and Elena Becker (Bellevue, Wash.) to play and start all 17 games in the 2014 season.

Despite her essential contributions to the team, her teammates have been more than supportive in her recovery process.

“I know they want me back and healthy first. Most of the pressure [on recovering] comes from me. I want to be back out there,” Keene said.

Despite Saturday’s scoreline of 14-3, the Loggers put up much more prolific numbers against the Boxers in the 2014 season.

The first bout against Pacific saw the Loggers victorious by a margin of 16-10 and the second saw the Boxers edge out a narrow margin of victory in a scoreline of 16-13.

The Boxers came out flying as they looked to press their home-field advantage against the Loggers.

The home team scored six goals against the Loggers in the first 10 minutes of the first half.

Despite some stellar goalkeeping work from Paskett, who saved six of the 16 shots the Boxers had in the first half, the Loggers saw themselves down 9-2 by the end of the first half.

The second half did not bode much better, as the Loggers only scored one goal to the Boxers’ five, rounding off the game with a 14-3 loss for the Loggers.

The Loggers continue their rough opening season schedule with a two-game road trip on March 7 and 8.

First, on March 7, they face off against the George Fox University Bruins at George Fox. Then they take on the Linfield College Wildcats on March 8.