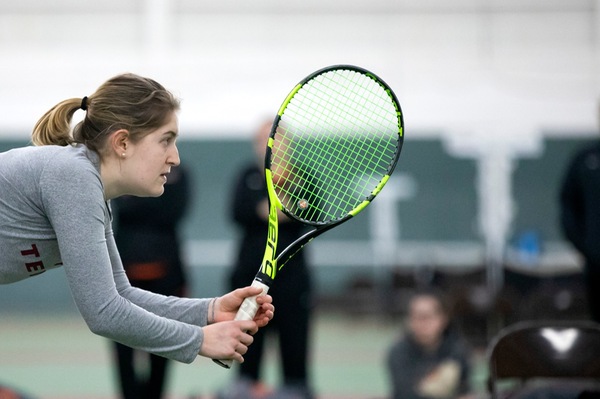 Puget Sound Women’s tennis is “kicking ass” this spring season, according to Sidney Alwen, a first-year men’s player. The men’s program, on the other hand, is off to what can only be described as a rough start. Nonetheless, spirits are high as Logger tennis looks forward to the remainder of the season.

In 2019, Puget Sound tennis has faced the expected challenges and excitement of a recent change in leadership.

Newly-appointed Head Coach Matthew Simons spoke about the transition: “The hours have been long, but the reward has been priceless. We have had some challenges, but overall the heart, courage and determination I have seen is tremendous.”

Since the spring season kicked off in February, Puget Sound’s women’s tennis team has won eight of their 14 competitions. According to Logger Athletics, they have had a run of four straight victories in recent weeks, including: 8-1 at Whittier (March 23); 8-1 at Pacific Lutheran (April 5); and 8-1 against College of Idaho (April 7).

The women’s team has also faced some tough results. In early March, they lost against Whitworth in a nail-biting competition (final result: 5-4). To add insult to injury, as Simons recalled, they lost the last remaining spot in the conference tournament in a tie-breaker against Whitworth just last year.

Simons reflected on this season’s defeat: “Sometimes there are losses that end up being the best thing for the team –– this was one of those losses. A team shows what they are made of not by wins and losses, but how they respond in adversity.”

“The best part is that we get to play Whitworth again,” Simons added. “And this time, I believe that our team will have a different approach to the match, and I look forward to see what the results show.”

Indeed, Puget Sound Women’s tennis avenged themselves. On Saturday, April 13, their dominant performance against Whitworth resulted in a 7-2 victory. The win launched the Loggers into second place in the Northwest Conference (NWC).

Simons acknowledges the different circumstances facing his two teams: “Both teams are at a different place in their journey. In regard to the women’s team, we intend to make the conference tournament and continue to work our plan and see where it takes us,” Simons said. “The men’s team has a different set of challenges and goals.”

It appears that building the men’s program is a long-term project for Simons –– one that will require patience but will pay off in the long run.

“With the men’s team, we are focused on creating a highly competitive environment where everyone is pushing and challenging each other,” Simons said. “The question is not if, but when everything will fall into place –– we have all the pieces.”

Alwen shared his thoughts on the struggles of his team: “Due to recent coaching changes, the men’s team started this season off slow, but we are continually getting better and picking up momentum.”

The ultimate goal for Simons is for both the men’s and women’s programs to establish themselves as top teams in the Northwest Conference, and to do so as a unit.

“Changing the culture of a program does not happen overnight,” Simons said. “The men and women have been amazing at coming together as a team.”

First-year Avery Honaker expressed similar appreciation for the solidarity between the two teams. “Practices on Tuesdays and Thursdays have been a highlight for me because they’re a combined practice (women and men), so we get to practice as a full team,” Honaker said.

This team spirit goes further than uniting the two programs, according to Honaker.

“I thought that I would be an outsider, a ‘freshy.’ This was not true at all. I was welcomed with open arms and treated as an equal,” Honaker said.

Alwen echoed this sentiment: “I love the team. They’re an incredible group of well-rounded, friendly people. I came for the tennis and stayed for the team.”

The camaraderie of the program helps keep spirits high, even during a difficult season.

“Overall, the team has been amazing at being resilient in the face of adversity and coaching changes and other circumstances out of their control,” Simons said. “That is what I am most proud of because those are skills that will take you far, not just on the court, but in life.”

Simons expressed great optimism about the remainder of the season: “We are exactly where we need to be and we look forward to finishing the year even stronger than we started.”

Looking forward, Logger tennis has only one more conference competition. Tomorrow, Saturday, April 20, the men’s team hosts Pacific Lutheran. They will see this as a great opportunity to keep improving and finish the season on the front foot. The women’s team will travel to Linfield on Sunday and look to clinch a conference tournament spot. The whole program could use your support!