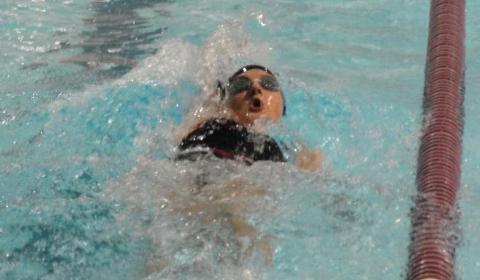 The Loggers’ swim teams continued a successful season with two dual meets the weekend of Nov. 15. On Friday, Nov. 15, they swam against Willamette. They swam against Linfield on Nov. 16.

In Friday’s dual meet, the men and women performed excellently. The women won 138-66 and the men won 113-91. The women’s impressive victory was in large part due to the three events the Loggers swept. The Loggers took first, second and third places in the 200 individual medley, 100 freestyle and 200 backstroke.

Swimming is both an individual and team sport. Loggers compete not only against the other team, but also against teammates and themselves in their constant push to improve their times. Ultimately though, dual meets are won by the team as a whole, which truly makes swimming a team sport.

The most exciting event of Friday’s dual meet was the 100 free. The Loggers swept the event for easy points for the team, but the true competition was between the swimmers who placed first, second and third.

There was less than a second time difference between the three women, a testament to how much each stroke and millisecond matter in competition.

Junior Tess Krimmer (Ojai, Calif.) took first in the 100 free with a solid time of 1:05.01. Krimmer was followed closely by junior Lauren Kochanowski (Salem, Ore.), who took second place by less than half a second. Senior Claire Diener (Portland, Ore.) rounded out the top three with a time of 1:05.71.

The men’s team had an impressive weekend as well, winning six events in Friday’s dual meet. Senior Derek Frenzel (Moscow, Idaho) helped lead the men to victory with an individual win in the 200 butterfly. He was also on both winning relays, the 400 free and 400 medley relay.

The men’s swim team swept the 50 free on Friday. Freshman Mitch Kilgore (Conifer, Colo.) raced in with a time of 24.71 and was followed by freshman Evan Hamamoto (Lihue, Hawaii), who clocked in at 25.73. Freshman Sebastian Harvey (Boulder, Colo.) closed out the top three with a time of 26.10.

The Loggers were back at Wallace Pool on Nov. 16 and swam against Linfield. Both teams won with ease, rounding off a successful weekend of swimming.

The men also swept the 50 free and 100 butterfly and took first in five more events. All together the men finished Saturday 149 -53.

The women won nine events Saturday with junior Melissa Norrish (Denver, Colo.) coming through with three of the wins. Norrish won the 200 free, 100 fly and 400 free.

Krimmer, Kochanowski and Diener faced off again, this time in the 50 free. They swept the event once more but with Diener taking first, Krimmer in second and Kochanowski in third. These women seem to be evenly matched and will be interesting to watch as they compete with other teams and each other to come out on top at the end of the season.

The Loggers are now done swimming dual meets until next semester but they will attend the Husky Invitational in December in Federal Way.