The Trail
HomeFeaturesBreaking the Silence: Israeli soldiers and life in West Gaza
FeaturesHighlights

Breaking the Silence: Israeli soldiers and life in West Gaza 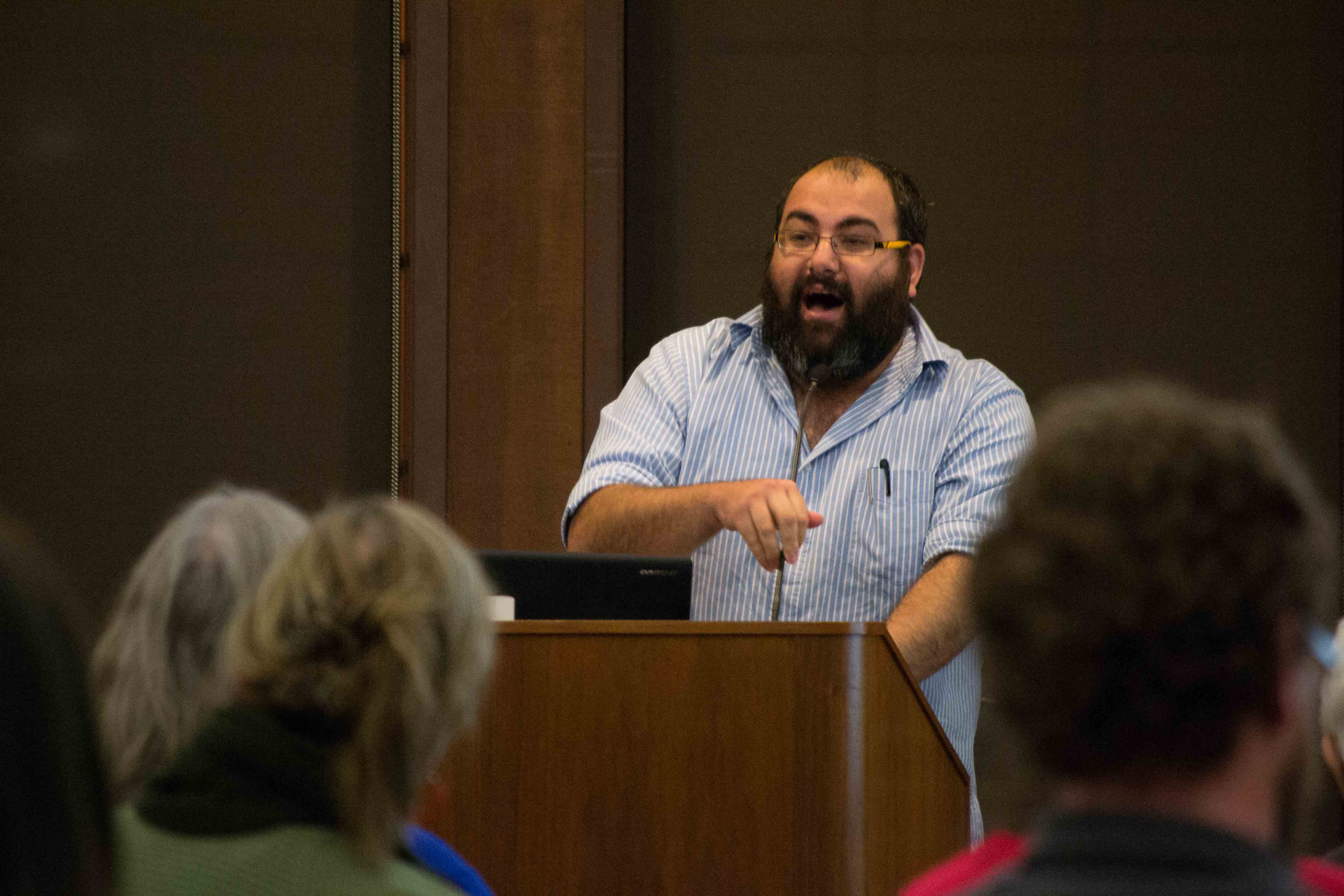 ASUPS Lectures and J-Street U hosted a guest lecture: “Our Harsh Logic—Israeli Soldiers’ Testimonies from the Occupied Territories” by Yehuda Shaul on Tuesday, Nov. 12 in the Wheelock Student Center.

Though most students know what ASUPS is, not as many are aware of J-Street U (the student branch of J-Street), an organization with 50 chapters spread throughout the country. J-Street is the political home for Americans who are pro-Israeli, pro-peace, pro-Palestinian and pro-democracy.
Breaking the Silence is an organization of soldiers who seek to inform people about the lives of the soldiers in the West Bank.  The book “Our Harsh Logic” is the long-term product of some of the work Breaking the Silence is involved in.

Senior Casey Krolczyk provided the opening. “I had the pleasure of visiting the territories of the West Bank with Yehuda Shaul,” Krolczyk said.
Shaul began the lecture by talking a little bit about his past.  “I grew up in Jerusalem. My family is on the political right. Over there left and right is occupation settlements, yes or no. Not political, not economical, not like here,” Shaul said. Turning to the screen, he put up the first picture. “After high school I drafted.  It was 2001.”
Shaul explained that Israel has a draft in place. “Women serve two years and men serve three. I did two years of service in West Bank in the town of Hebron. 200,000 Palestinians live there, and in the middle is a settlement of 850 Israelis. I became a company sergeant—one of 650 sent to guard the settlement. For those who don’t know, a company is about 120 soldiers.”

Shaul changed the picture again before continuing. “I had lots of doubts and questions about what was right,” Shaul said. “That’s the last thing an army wants: a soldier who thinks. As a commander it was worse—if you stop to think the 50 people behind you will too. In the military, 50 people who stop to think is the last thing you want.”
Shaul paused before continuing. “My last eight months I was a company sergeant.  I found myself planning my life.  It was a terrifying moment because it was the first I had thought as a civilian and I had a lot of doubts. I started asking questions.”

Shaul spoke about the concerns he had and how, when he did not know who to turn to, he went to his unit. He found that many of them also had the same questions he did.  Thus, Breaking the Silence was born.

“June first we opened the first public attraction of Breaking the Silence. We had no plan, no idea what we were doing. We very soon realized we had a mess,” Shaul said. “7,000 people came to see the exhibit in the three weeks it was open. All who came wanted answers. [That] forced us to put our thoughts and feelings into a coherent message.”
Shaul recounted the events that took place during the exhibit.  Somewhere along the way he made the realization that the “story is way bigger than just a unit.”
Now, Breaking the Silence does two things. “We document soldiers, 950 men and women from 2000 till 2013, we cross check, verify, then publish,” Shaul said.
The organization’s second function is a little different. “We use personal testimony as a platform to get the word out,” he said.

Shaul estimated that they interview roughly 100 veterans a year on top of the 450-500 tours they do.  Shaul was adamant that the biggest part of his work was with youth who had not yet been drafted.

“Breaking the Silence uses simple logic [by] going into society, holding up a mirror and asking the one most important question: What is our moral boundary? When is our red light? This is the occupation, take it or leave it. [As a] soldier commander you should distinguish between good and evil, black and white.  Your parents taught you right and wrong. As a soldier the only thing I can ask is: What is good? What is evil?”

Shaul commented on how a soldier’s logic is different because as a soldier, he is told that his side is the good guys, and the other side is bad. The way Shaul described what happened in the occupied territory was simple. “Put it all in a blender for one minute then there is nothing left.  So it’s all grey—then it must be white.”
“How slowly, slowly you cross another red line and another and another,” Shaul said. “These tiny stories make up the big picture. In 2010 we felt we could say something more.  The act of breaking silence equaled an act of responsibility. Do we live a life of silence or of breaking silence?
“The only way of overcoming fear is by breaking the separation. Is there anything Jewish in a regime that strips a people of their rights?” Shaul said.
“[My favorite part was] how he talked about the pictures and what they did, the tactics and their presence,” freshman Kira Berman said.  “Making people aware of what’s happening. It was double sided, what soldiers go through is not ‘what’s good or bad’ but how it makes them into ‘us and them.’”

Shaul ended the lecture with a final statement. “At the end of the day behind the work of Breaking Silence is the mirror that shows the truth.”

Letter to the Editor: Gaza vigil 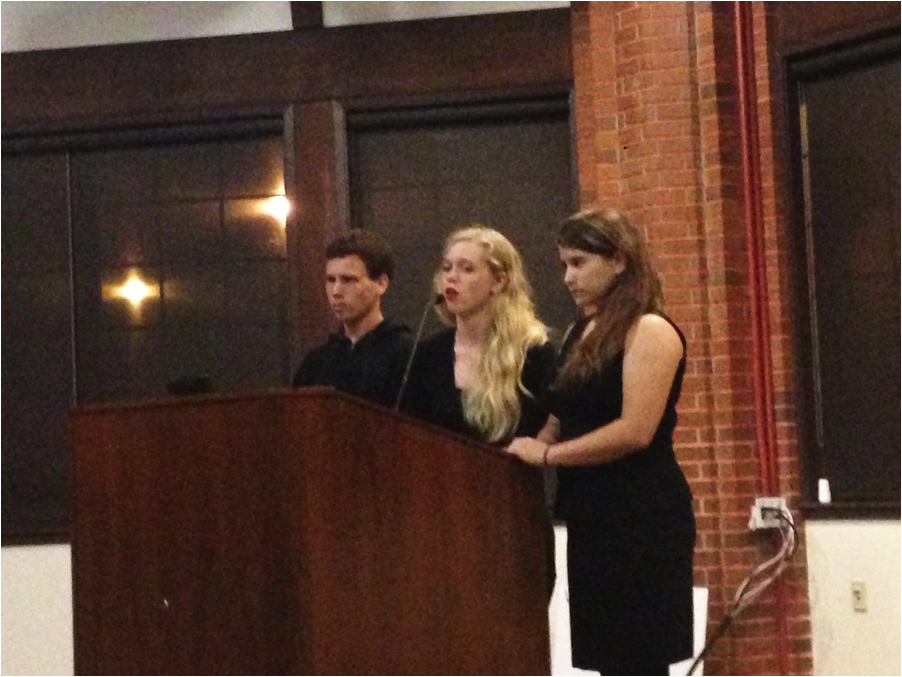