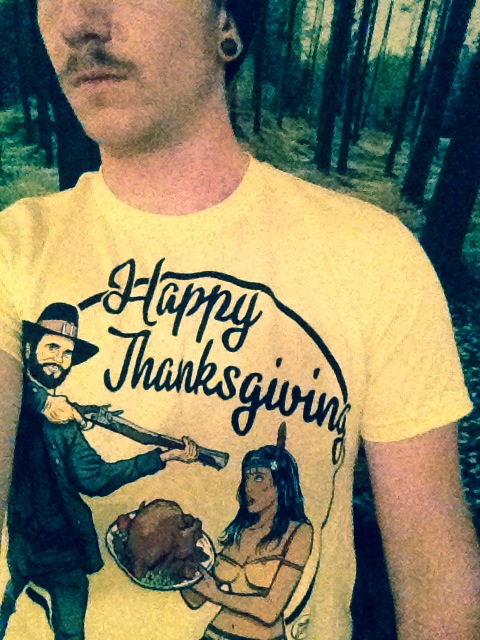 Gearing up for the holiday season, Tacotown Elementary School has recruited students from grades 4 to 6 to begin rehearsal for the most shocking Thanksgiving play ever.

The director, an ex-Occupy movement organizer simply known as “Jello,” described the play as “very counter-culture” and sure to inspire viewers to “wake the f*** up.”

When the school principal first raised concern about the play’s exceedingly grim message (“Um, don’t you think that’s a bit too adult for children?”), Jello accused him of exacerbating America’s systematic oppression of minority voices.

The principal promptly shut his facehole.

At last, with no further setbacks, Jello began construction for the stage and recruited children from the Puyallup tribe to play the Native American parts.

Many Puyallup parents were hesitant to allow their children to participate at first, but once they were presented with the impactful historic accuracy of this brief synopsis, they considered otherwise:

“The play opens as Life Derekson and his best Viking bros reach American shores within the 2nd Dynasty.

“They wreak some havoc upon the natives for a while, but end up bored and missing the sweet stink of their mead halls so they head back to where they came from.

“Then Christopher Columbus comes along, so wasted that he mistakes America for India, and decides the land is pretty chill for colonizing.

“Not too much later, a ship chock full of Jesus freaks and named after some flower crosses the Anaphylactic Ocean and lands in Vaginia.

“So there is much feasting with the natives and much thanksgiving, but mostly on the part of the pilgrims.

“While casually chatting over turkey, the pilgrims kindly thank the natives for all their land and in return, gift them with measles and smallpox.

“Needless to say, the natives are not thankful for that.

Like some sort of thespian kingpin, Jello reportedly bribed all other elementary school teachers within the area from supporting other Thanksgiving plays in order to prevent such nationalistic messages from infecting children’s ears (natives and pilgrims sitting around a huge table, eating from a cornucopia, y’know, singing “Kumbaya” n’ shit).

Soon, the day of the opening performance had suddenly arrived and as Jello surveyed the audience from backstage, he noticed it was to be a full house.

Thinking to himself how similar this support was to his days as an Occupy leader, Jello considered how he might be able to piggyback off the audience’s scintillating energy and start another anarchist movement right there in the theater after the show.

But as soon as Jello’s child actors started to depict the disease and death that white men brought down upon the natives, audience members began to cry out and flee from their chairs, unable to cope with their inherited feelings of American guilt.

It’s been reported since that Jello has taken his actors and formed them into a militia intended to overthrow “the capitalist machine.”

Their first strike will be the Starbucks on 6th Ave. because as an anonymous child soldier told The Flail, “it makes my dad really stinky.”