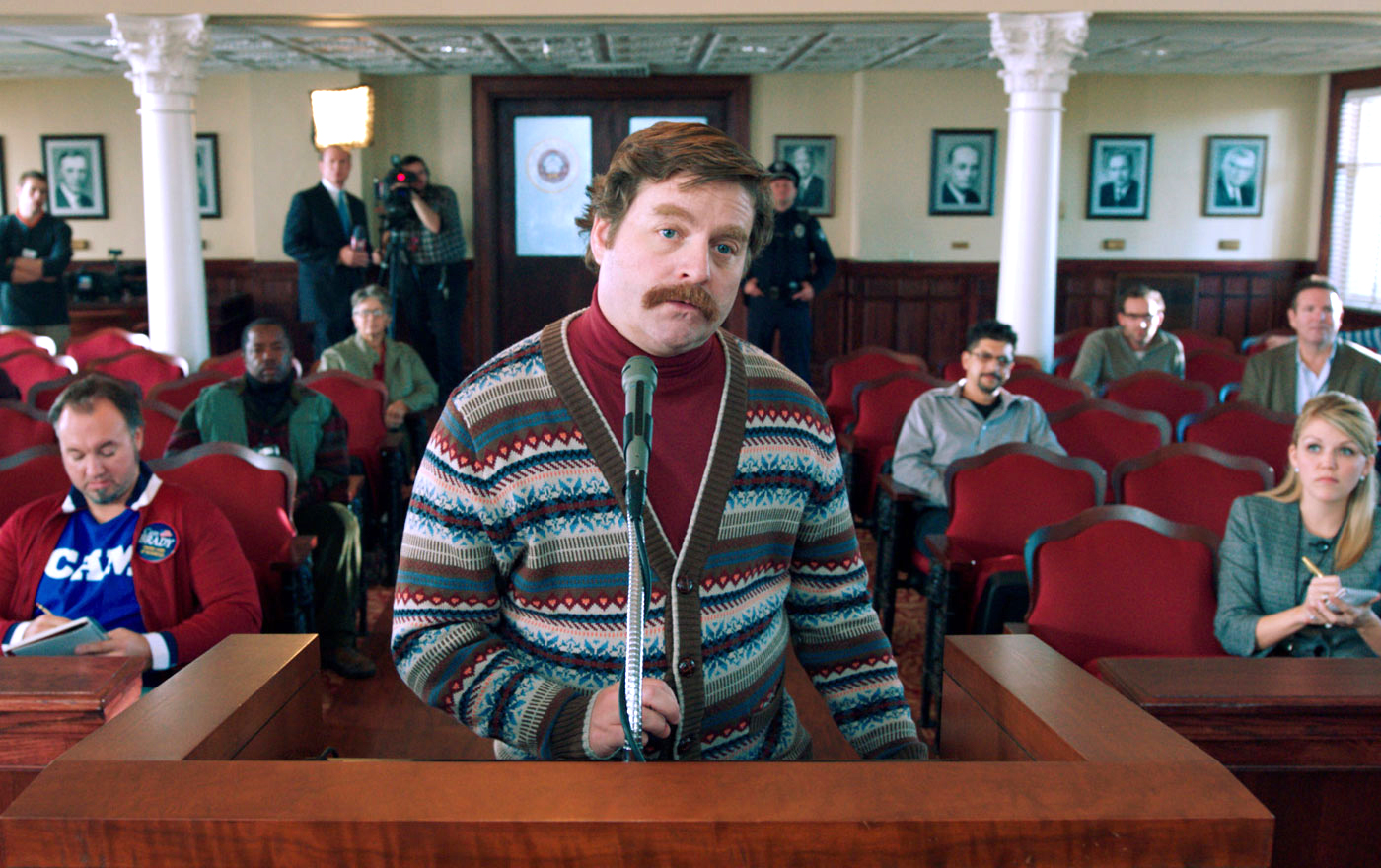 As the expression goes, “Art imitates life, life imitates art.” In the case of The Campaign, starring Will Ferrell and Zach Galifianakis, art imitates life.
The craziness and outlandishness from this past election cycle is nicely showcased in this movie, albeit with a bit more swearing and a few more rattlesnakes.
A charismatic and slick Congressman Cam Brady (Ferrell) is running unopposed in North Carolina’s 14th district until two affluent businessmen decide to run their own candidate, Marty Huggins (Galifianakis).
The movie follows their campaign highlights and lowlights—mostly lowlights—with the glamour and flair of a NASCAR race. Mixing in the occasional somber note about politics into an otherwise jovial movie, Huggins and Brady fight to the bitter end. Election day marks the climax to the movie, and although one of the two candidates wins, neither comes out looking clean.
Both Ferrell and Galifianakis give strong performances, with amusing quips and funny back-and-forths. Ferrell plays his usual role, boisterous and mildly obscene, with enough fire and charisma to fill out the character. To his credit, though, Galifianakis isn’t overshadowed by Ferrell. Although still playing his characteristic dork role, Galifianakis has enough sass and wit to weigh down his side of the ticket. The television ads the two candidates run are hilarious, mostly in their over-the-top nature, in line with the rest of the comedy.
The jokes the two candidates make are as much said for the audiences’ laughter as it is for political satire. After such a long election cycle, watching two very funny actors mock our political system provides a modicum of solace.
Most of the movie was ridiculous, making fun of the clichéd political world. At times the laughter was not at their jokes, but at their resemblance to reality.
Watching Brady use the same Five D’s from Dodgeball to twist his way out of questions looked remarkably similar to the sidestepping currently used in Washington D.C.
With every twist and turn of the election cycle comes more media scrutiny, more inane political stunts and more raucous showboating, and that is just the first half of the movie. One of the funniest moments in the film is when a supporter for Huggins shouts out at a town hall debate, “I don’t wanna live in Rainbow Land, and you can’t make me!”
For as much as this movie imitates our current political process, the creative license taken provides a needed distance from real life. The merciless mocking of our politicians is at its best when it is distanced from reality, not trying to ground statements in humanity.
Making movies about our political system is a difficult feat to accomplish well. For example, Robin Williams’ movie Man of the Year was mediocre despite him being one of the funniest men in Hollywood.
A trap that Man of the Year, as well as The Campaign, falls into is trying to ground the movie in reality, trying to give it a humanistic touch. This inevitably fails, leaving the movie light on humor and too heavy with unneeded emotional plotlines. The duo created by Ferrell and Galifianakis is fortunately funny enough that their humor outweighs most of the emotional plot filler.
Patriotism, bathroom humor and silly gags abound in this movie, for better or worse, trying desperately to find the line between social commentary and comedy.
If you were already disenchanted with our political process, I would not recommend going to see this movie, because it will not improve your outlook. For anyone else, though, this movie may not keep you laughing until the next presidential election, but you may be able to keep chuckling until finals.
The Campaign shows Friday, Nov. 30 through Sunday, Dec. 2.
Campus Films shows movies in Rausch Auditorium on Fridays and Saturdays at 8 p.m. and 10:30 p.m., Sundays at 2 p.m. and 8 p.m.