The Trail
HomeArts & Events‘I’m Banned From The Gamestop at the Tacoma Mall’: Campus united through comedy
Arts & Events 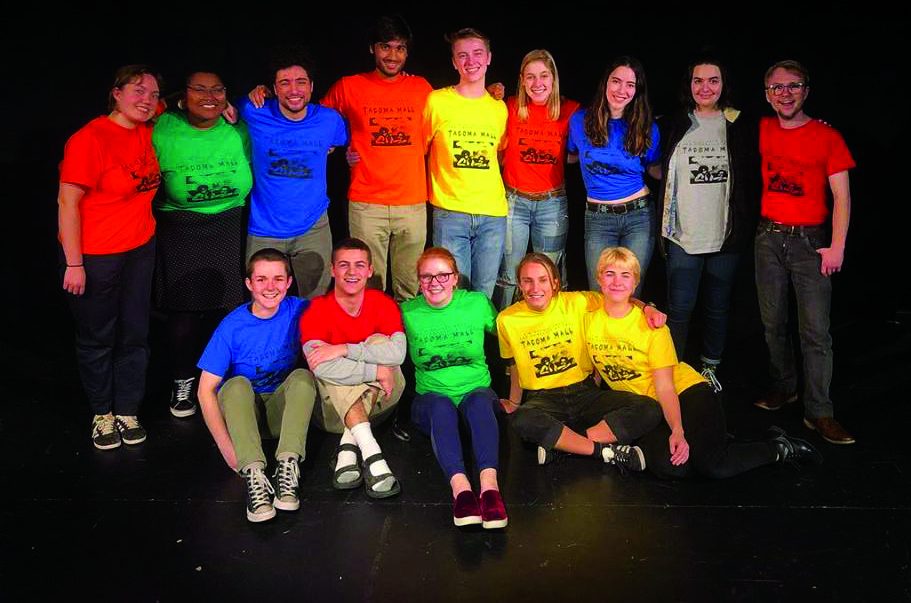 Pictured: The cast of Ubiquitous They after their performance — photo courtesy of Andrew Izzo

Puget Sound’s improv and sketch comedy club, Ubiquitous They, drew a large and rambunctious crowd for their show “I’m Banned from the Gamestop at the Tacoma Mall” in Rausch Auditorium on Friday Nov. 30.

The late night show, which ran from 9 p.m. to 11 p.m., opened with the improv group, who played several classic improv games for the gathering crowd. In one game called “Four-way dub” four members of the improv team supplied voices for each other and lip synched the improvised dubbing with hilariously chaotic results.

At 9:30 the much-anticipated main event, the sketch show, began. Similar to Saturday Night Live, the show featured a series of 14 comedic sketches including anywhere from one to all 13 members of the production.

The skits started with a bang with “ASTRO” a scene in which the two club presidents, Sam Doubek 19’ and Molly McLean 19’ lip synched an extremely amusing and somewhat risque rendition of the song “Fever” complete with a mustache, fur coat and balloons.

The sketch show is put on once per semester and is written, performed, directed and designed entirely by students. The group plans the event in weekly meetings where they research, write and practice sketches together. “We try to make it as collaborative as possible and let everyone comment and suggest changes,” Doubek said in an interview with The Trail.

All of the hard work paid off Friday night as the audience laughed and cheered for every nuanced performance, their laughter not sparing a single joke. The cast in turn delivered every line with unabashed enthusiasm.

The beauty of Ubiquitous They is in both their unity and diversity.

“In UT there’s sort of a space for people from different social groups on campus who all like performing to come together and give their own voice — it’s like the most democratic theater on campus in my opinion,” Doubek said.

This culture of acceptance was apparent in the dynamics of the performers as well as the enthusiasm of the audience.

“It’s given me some of my best friends and some of my most fun memories. It’s such an amazing exercise in becoming confident in yourself and being an idiot in front people,” Doubek said.

Not only was the environment positive, “Ubiquitous They” also used comedy as a social message. In “Campus Life,” the group poked fun at the privileged culture on campus that many can be blind to.

“I think comedy can be a really good way to hold a mirror up to people as corny as that sounds — it’s almost a really approachable way to call people out,” Doubek said of the skit. “I want people to sit in the audience and see us making fun of them and go, like, ‘Ah God, that’s totally something I do. I should probably stop that.’”

Along with the satire,“I’m Banned from the Gamestop at the Tacoma Mall” was able to bring together many different groups at Puget Sound and unify them through comedy. The success of the program was a testament to the devotion and talent of the cast and crew.

The five most useless YouTube videos of all time