The Trail
HomeArts & EventsNew exhibit ‘Above, Below and Beyond’ at Kittredge Gallery
Arts & Events 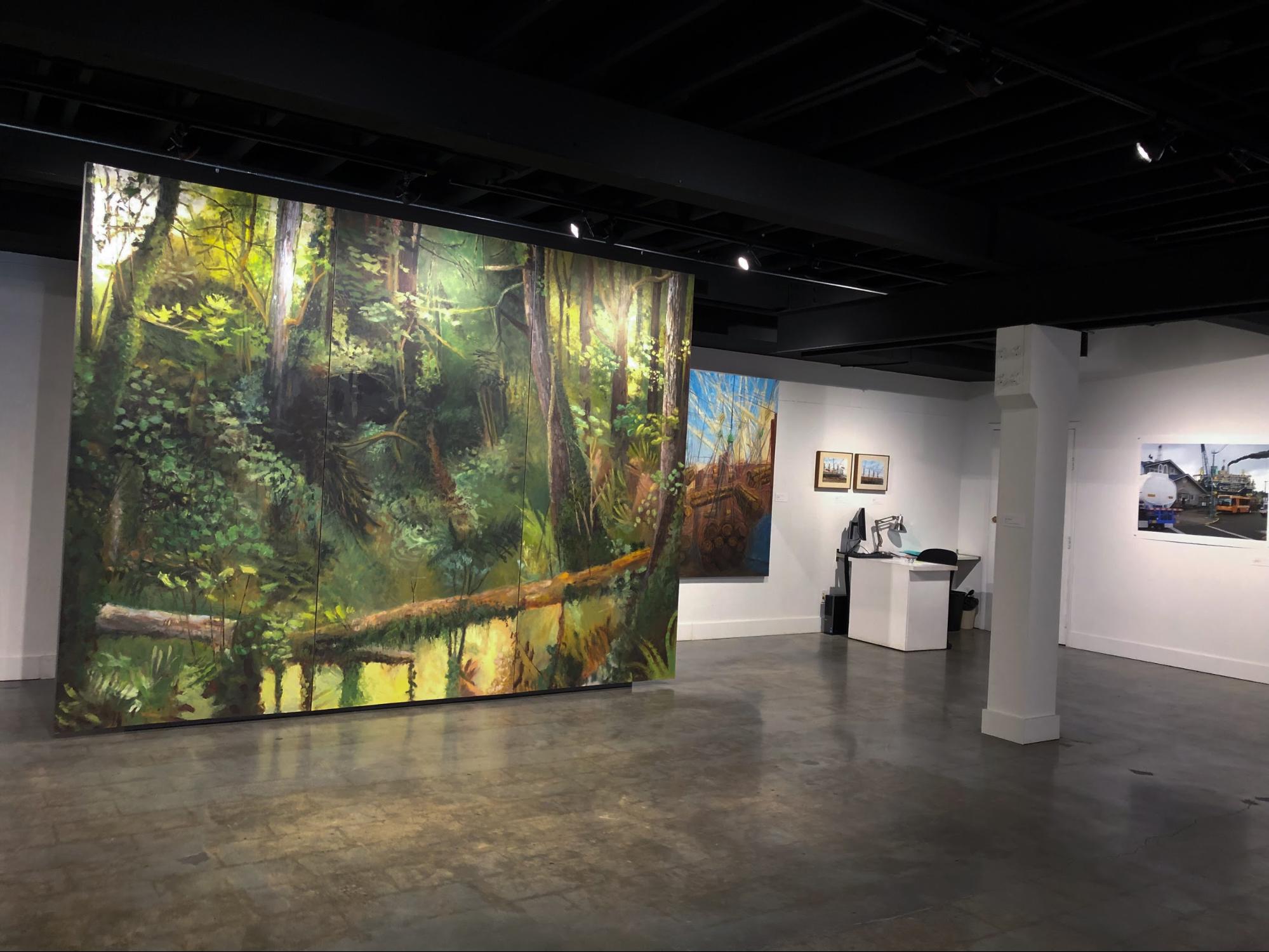 Seattle-based artist Kathy Gore-Fuss’s vibrant and expressive paintings are evocative of the dichotomous Pacific Northwest landscape. Her moody and wild forests drenched in green paint contrast her angular depictions of industry, which are often neatly drawn with charcoal.

Gore-Fuss was born in Seattle, raised in the Midwest, got her BFA in drawing and painting from the University of Washington and now lives in Olympia. Her newest series, “Above, Beyond and Below,” which is exhibited in Kittredge Gallery at Puget Sound until April 20, explores our connection to and conflict with nature.

Gore-Fuss uses multiple perspectives, some from drone-captured images, others in the form of edited digital prints, but the majority of her work is done in plein-air, an artistic tradition where the artist paints outdoors surrounded by nature, unconfined by an indoor studio.

Many of Gore-Fuss’ plein-air paintings were created in the Washington woods or the port of Olympia near her home and are inspired by her love and respect for nature. This love for the Washington outdoors began when Gore-Fuss was a child.

“My parents prioritized doing things outdoors, so we did lots of camping and hiking when I was young. I continued to explore WA State as a young college student, backpacking and hiking in lots of different parks and forested lands,” Gore-Fuss wrote in an email to The Trail.

Most of Gore-Fuss’s works were painted in the outdoors, but it wasn’t always like that. Her early work was much more abstract and mainly done in the studio; it wasn’t until recently that she turned to plein-air. This experience completely changed her perspective about art and nature.

“I took a workshop eight years ago with another painter and it introduced me to working outside and I fell in love with it. Prior to that workshop I had always sort of assumed that I would always make my artwork in the studio. When I started working out in nature, a huge light bulb lit up and I knew this was something I needed to investigate fully,” Gore-Fuss wrote.

“When I was a studio artist, I drew more from within myself on an emotional level. When I am working outdoors, I am really trying to experience the emotional connections I have with nature. I can work in both of those environments equally well as a painter, but when I am in the forest, I seem to access something beyond the self, more universal, maybe even primordial,” Gore-Fuss wrote.

This feeling of universality was soon translated to more of a social justice perspective. Gore-Fuss began to notice that despite Washingtonians’ love for the Pacific Northwest landscape, many took up unsustainable practices.

“When commuting to many of the trailheads in our state, one would frequently drive through a clear cut of logged land. I have always had questions about how we sustain ourselves and I think as I age, they have become much more pressing concerns for me,” Gore-Fuss wrote.

Recently, in an attempt to expand her understanding of nature from a rapidly developing technological world, Gore-Fuss began capturing images of nature using a GoPro.

“I am hoping that the aerial viewpoint will expand my understanding of how nature and humans might live together harmoniously. Sometimes when we see things from a different point of view, we can understand a greater ‘whole,’” Gore-Fuss wrote.

Gore-Fuss is hoping that her expression of nature versus industry and her recent work of nature captured through technology will open up conversations and questions about our own relationships to nature. She hopes that these conversations might lead to a more unified perspective about the sacredness of nature.

“We need to talk to one another more, try to understand different viewpoints even if we find them confusing or off-putting to our own values. Art can help us to experience something unexpected, and we can encounter ourselves more truthfully. If art can spark more inquiry and more discussions, then I think I might have done my job,” Gore-Fuss wrote.

It is clear when walking into the gallery that Gore-Fuss has connected to a more spiritual realm. The forest paintings go beyond landscape painting to capture not only nature in itself, but the way it feels to be surrounded by nature and to be perfectly at peace. The charcoal industrial drawings shatter this peace with their sharp edges and remind the viewer of human’s complicated relationship with nature. 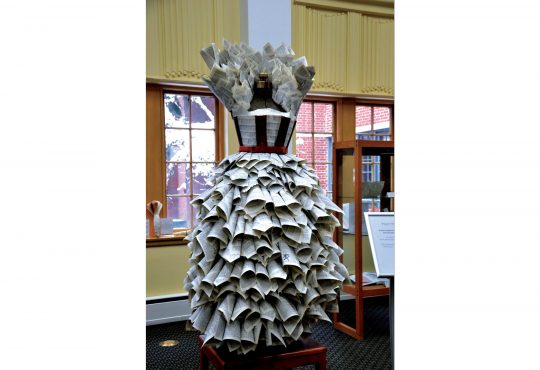