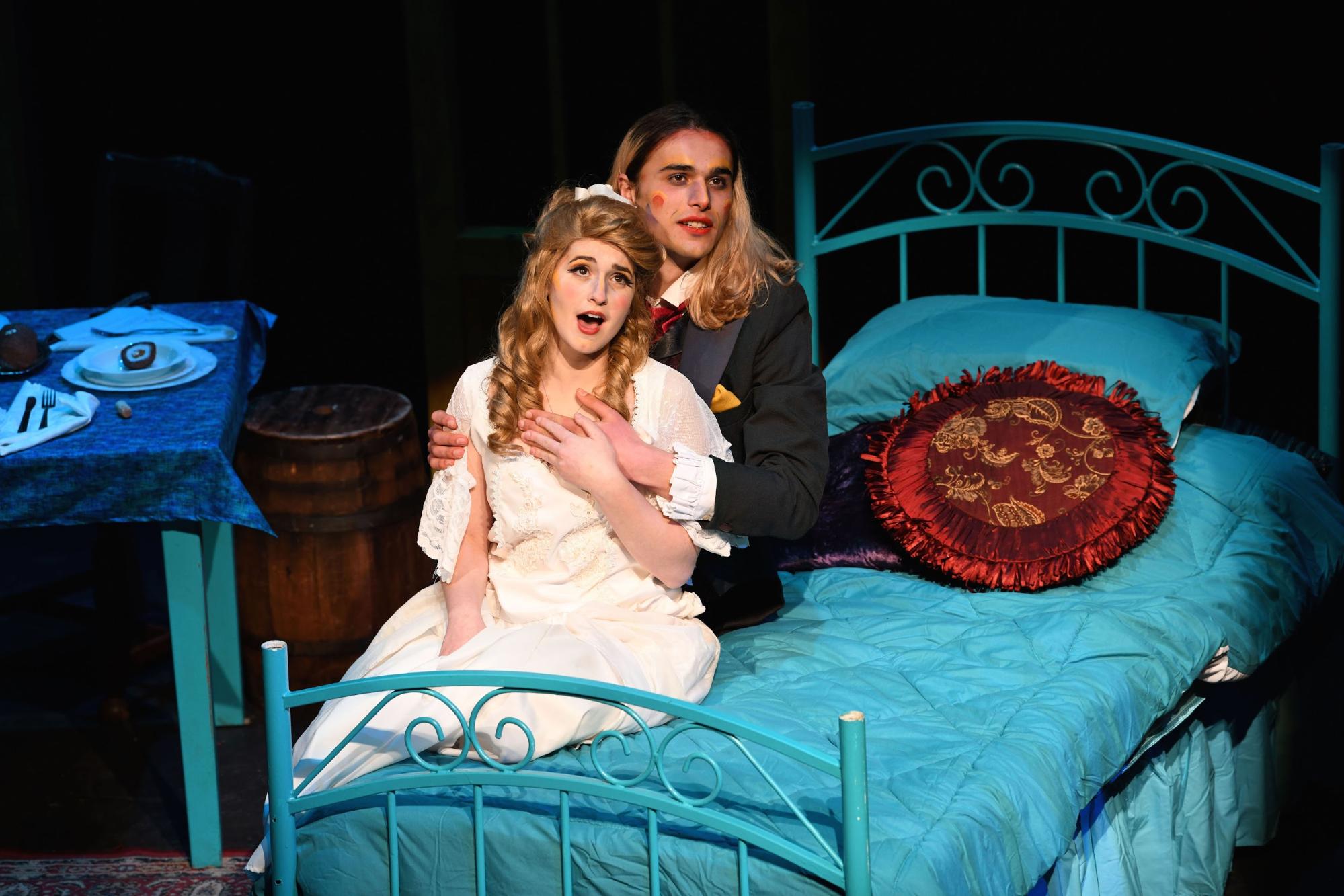 “It’s Art! And Art isn’t supposed to be nice!” Such were the words of charming anti-hero Mack the Knife, played by junior Max Topanga, in Puget Sound’s production of “The Threepenny Opera,” which opened Friday, March 1 at 7:30 p.m. in the Norton Clapp Theater.

This pithy little punchline, spoken just 20 minutes into the operetta, captures the show’s entire ethos. Art — good art, that is — isn’t meant to be nice. It’s meant to provoke, to perturb and to push its audiences into questioning their assumptions about the world and how it operates.

According to the show’s director, Professor Sara Freeman, this was the central goal behind all of playwright Bertolt Brecht’s work, “Threepenny Opera” included.

“What’s definitive about Brecht’s work is that he put together a set of ideas in the early 20th century about theater’s relationship to depicting the social world and realized them on stage,” Freeman said.

Indeed, “The Threepenny Opera” is a show filled to the brim with social critique. There’s Mr. and Mrs. Peachum, who seek to commodify human pity by monopolizing London’s panhandling population; Mack himself, London’s most notorious criminal who later decides to go into banking (“It’s safer and the cuts are bigger!”); and the corrupt police commissioner, who turns a blind eye to all of Mack’s antics on account of their boyhood friendship.

But Brecht’s commentary doesn’t end at the content of the play itself. It seeps into every aspect of the production. Unlike his realist contemporaries, who sought to draw audiences in by creating the perfect illusion on stage, Brecht wanted his audiences to constantly be reminded that they were watching a manufactured narrative — or, as Freeman put it, to “expose the means of production” in theater.

Whereas in a typical show, audience members passively accept representations of reality, Brecht wanted his audiences to sit back and ask, “Do we want the world to work like this? Because we could make the world work differently,” Freeman said.

Brecht calls this “verfremdungseffekt,” which Freeman translates to “distanciation” or the process by which the playwright “makes strange” the world of the play. In this production, that manifested in colorful though minimalist set design with the backstage and all of the set pieces completely visible to the audience.

Brecht’s unconventional writing also presented a considerable challenge to the actors. According to leading lady Sophia Gotch, who played the show’s wide-eyed ingenue Polly Peachum, the hardest part of her role was pinning down her character’s motivation.

“I didn’t understand my character at all until I started talking to Sara and it was a complete 180,” Gotch said. “Because the lines are very different from the intention of the play, I think. It’s very easy to read Polly Peachum’s lines and think she’s just this little girl who doesn’t know anything.”

But throughout the rehearsal process, Gotch discovered that what really motivated Polly was power. “Polly is young and she is very emotional. But she knows what she’s doing,” she said.

And of course, in typical Brechtian fashion, this interiority was communicated in the play via a snarky meta-textual device, when in the opening number, each of the women in the play were handed cards with various themes of show written on them. Polly Peachum smiled sweetly but sinisterly as she delicately held a card that said “Power” in bold black script.

This kind of distanciation wasn’t limited to the actors and the set design, but was also incorporated in the show’s musical score. Musical director Dawn Pedulla notes, that though it is based upon John Gay’s “The Beggar’s Opera,” the score itself is a hybrid of opera, musical theater and even jazz.

“I believe this sort of purposeful ambiguity around the form of ‘The Threepenny Opera’ and its inclusion of many different musical styles is in line with Brecht’s disregard for cohesion and aesthetic unity,” Dr. Pedulla said.

All of these elements combined to create a completely immersive sensory experience that was as challenging as it was charming, highbrow as it was hilarious. With such a dynamic cast of characters, colorful and creative set design, and variety of musical modalities, “Threepenny Opera” offered a theatrical experience like no other.