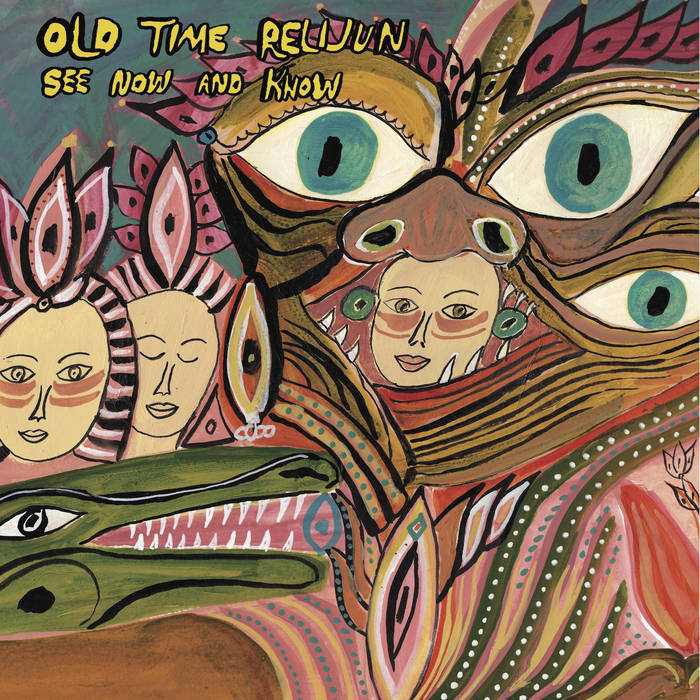 After a decade-long hiatus, Olympia and K Records experimentalist legends Old Time Relijun have returned with a concise, bright set of songs written out of necessity in response to our troubling times.

Old Time Relijun seem to be working in multiple levels on “See Now and Know.” They are immediately confronting our current sociopolitical and economic reality, while also channeling a more transcendent power. The drums and bass provide a steady heartbeat of funk throughout the album that helps keep the album as recognizably part of our earthly experience. At the same time, the wailing saxophone, grunting vocals and dissonant guitars are played with such fiery spontaneity that it seems that the band might have been possessed by a powerful muse while recording.

“See Now and Know” is a 23-minute ball of furious energy, feeling spontaneous and controlled all at once — it’s a ritual performed to banish evil forms from our world and bring forth mystic creatures from some other celestial plane to dance and heal with.

“See Now and Know” is available to stream and digitally download at oldtimerelijun.bandcamp.com

For Fans Of: Grouper, Múm, Björk

It’s easy to get lost in Clay Beds’ debut, as their music is an encapsulating experience, especially when listening with headphones, which is absolutely my recommended form of listening for this project. The incredible soundscapes on “Clay Beds” make for some of the coziest 20 minutes of music I’ve heard this year.

Despite the ethereal nature of Clay Beds’ music, their use of trap/hip-hop beats and clear, distinct electronics makes their debut EP worth critically listening to, instead of just letting its dream sensibilities wash over you. This EP is a simultaneously perfect listen for anyone looking for music that is moody and atmospheric or intricate and precise.

Each song on “Clay Beds” is a complex, layered mix of electronic, ambient, hip-hop and dream-pop music that moves through the fog, constructing distinct edges within a perfect grey, Pacific-Northwestern ambiance. The whole album, although relatively unpredictable in its movements, is immensely bouncy and accessible. “Honey Oat” never feels pinned down to one thing; the mixture of jazz, hip-hop, funk and the occasional trip into Zimbabwean Shona music influence ensures the album never grows stale and makes relistening incredibly easy. It’s impressive how the duo can manifest such deep, interesting soundscapes with just drums, keys and vocals.

I do wish that “Honey Oat” were a bit more expansive, allowing for some of the more dramatic musical shifts to feel more naturally fluid within the context of the album, but those feel like critical nitpicks, especially for a debut full-length. As it stands, Honey Oat’s self-titled album shows sparks of absolute brilliance that I believe will only be sharpened and further mastered as time goes on.

“Honey Oat” was released on Astro Nautico and is available right now at atronautico.bandcamp.com