The Trail
HomeFeaturesThe Board of Trustees: Who are they and what do they do?
Features 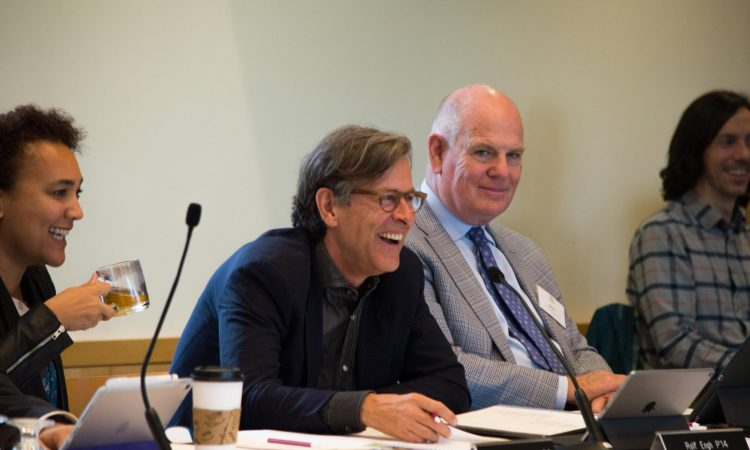 For those of us who don’t work directly with the Board of Trustees, their presence may feel a bit distant. Who are they? What do they do? And most importantly, what is their relationship with the student body?

“The largest contribution that the Board of Trustees makes is its broad and deep pool of talent,” Associated Students of the University of Puget Sound (ASUPS) President Collin Noble said.

“While the financial aspect of their generosity is often cited, I believe that the members’ time and expertise constitute their greatest contribution to the campus. This often comes in the form of legal, financial and humanistic guidance,” Noble said.

In total there are 30 trustees, including the Board’s four main officers: the chair, vice chair, president and treasurer. This year these positions are held by Robert C. Pohlad, Guy N. Watanabe, Isiaah Crawford and Janeen Solie McAninch, respectively.

In addition to the Board members, there is also a secretary to the Board of Trustees. This year the secretary position is held by Joanna Carey Cleveland, who succeeded the former secretary Liz Collins last year.

“We often think that the Board is able to make unilateral decisions or manage day-to-day functions of the University,” Noble said.

“This, I believe, is a lack of information that is easily consumable for students. Many have never heard of or interacted with the Board of Trustees and so they are not aware of the scope and purview that the Board has,” Noble said.

Members are elected on a three-year term and can be elected three times total before taking a mandatory one-year minimum break from the position.

Most members also have some special or personal relationship to the University. As stated by the University’s webpage, members of the Board of Trustees include “alumni, parents, community members and the university president.”

“I was heartened to know that almost all of them are alumni or parents and that many trustees provide much more than big donations,” Noble said.

“They really think about Puget Sound in thoughtful ways and want what is best for the University. Recently, two board members attended Posse Plus Retreat and were welcome additions. Sunshine and Fred are fine examples of the heart that the Board has for the University and, ultimately, the students,” Noble said.

Sunshine Morrison and Frederick W. Grimm are both board members that recently attended the Posse Plus Retreat this past February. Morrison is the Principal and Founder of Radiance Communications in Seattle and Grimm is the CEO of Triad Development in Seattle. Both are alumni of the University of Puget Sound.

“My initial perception that I had to change was generalizing a group of over 30 people. Through my assumptions that the Board was only rich, old, white men, I erased the identities of the other trustees who are women and people of color,” Noble said.

“Additionally, this generalization did not allow for the complexity and humanness of all of our board as individuals.”

Morrison, who is serving her first term as a member of the Board of Trustees, spoke about her experience as a first-generation student of color on campus as well as the value she found within her education at the University of Puget Sound.

“I can relate to the challenges that many under-represented and first-generation students face. I know what it’s like to walk onto campus, where the majority of students do not look like you. I know how hard it can be to navigate the admissions and financial aid process,” Morrison said.

“As a student, I loved the personal access that many professors, staff and even two university presidents so generously extended to me,” Morrison said.

“I want to help preserve and promote this incredible university. Beyond that, I hope to listen, learn and collaborate with students, faculty and staff,” Morrison said.

Board members come from across the country to meet three times a year for two days at a time. During these gatherings, trustees attend meetings which “include an executive session with the president; workshops on key strategic issues; meetings of policy and operating committees; meetings of policy sub-committees; opportunities to engage with members of the campus community; and a business meeting,” as stated by the University’s webpage.

There are also portions of the Board’s meetings where members have the chance to hear from the student body. During the executive meetings, three ex-officio members (the ASUPS president, the chair of the Faculty Senate and the president of the Alumni Association) have the chance to submit a written report as well as speak before the committee “to provide context and perspective that informs decision-making,” according to the University’s webpage. They do not vote on matters.

During the Policy and Operating Committee meetings, one student for each sub-committee is selected by the ASUPS President. These committees include those of Academic & Student Affairs, Development & Alumni Relations Representative and Finance & Facilities Representative; all have a chance to speak on behalf of the student body. Currently these positions are held by Nick Gerard ’19, Gabrielle Kolb ’19 and Mary D. Aquiningoc ’19.

Also, a portion of each business meeting is open to students, faculty and staff. This portion is usually held near the end of the second day, during the afternoon, as stated by the University’s webpage.

“I do believe that the Board and the President’s Cabinet can take more intentional efforts to get to know the evolving student body,” Noble said. “This is something that all students can and should be a part of making happen. I will also note that board members … have expressed specific interest in building deeper connections with the ever-changing student body.”

When asked how students can engage more with the Board of Trustees and make a difference on campus, Morrison had this to say to the student body: “You have a voice and it is valued. Ask for candid feedback. Then listen. Revise your idea or proposal, if necessary. Enlist allies, mentors and sounding boards along the way!”

“A scorched-earth approach generally doesn’t yield desired results. Remember to thank your network for their time, insight and guidance along the way. Bonus points if you send a handwritten note,” Morrison said.