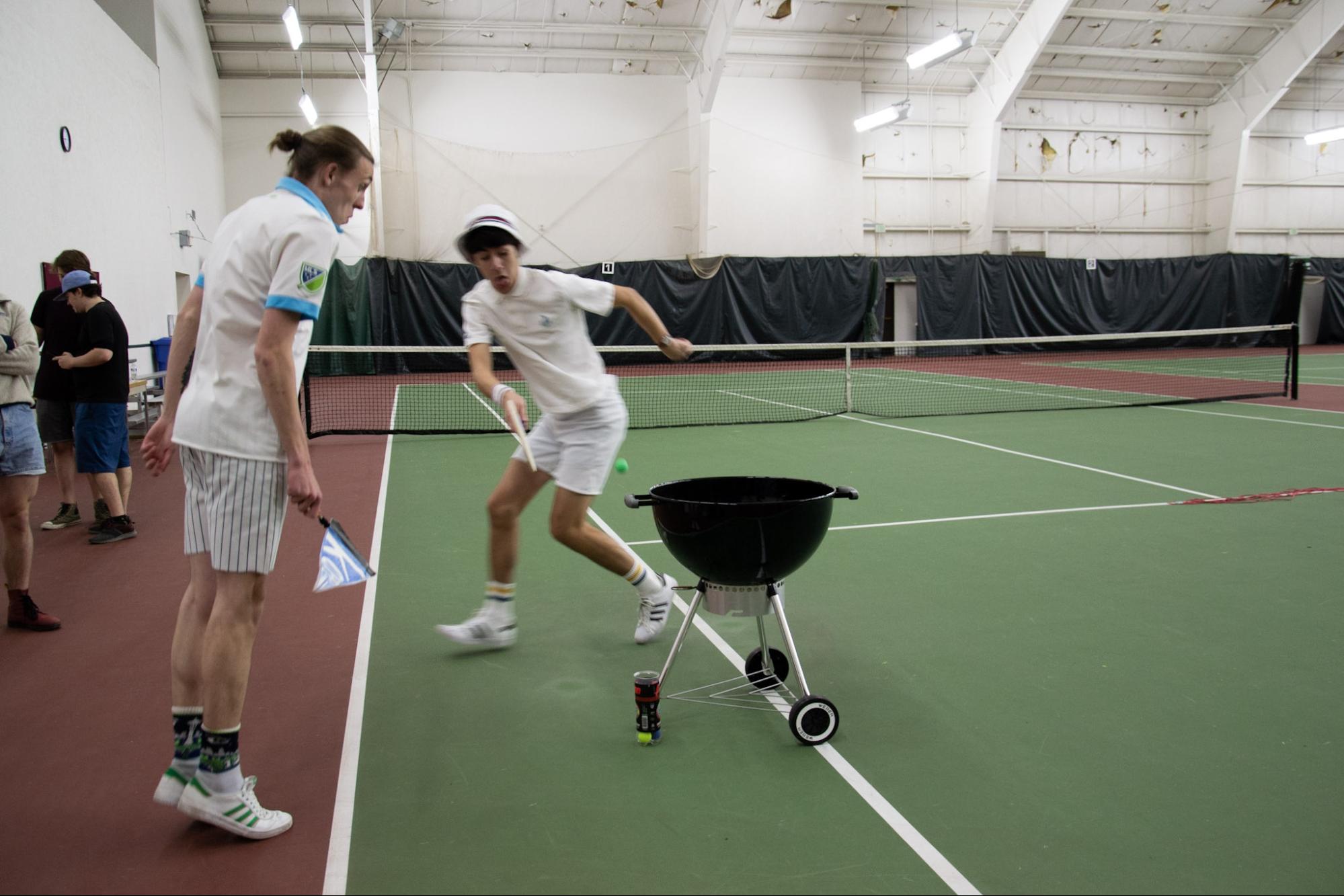 The setter has set the ball back to the server and now attempts to get some points. — photo credit to Charlotte Fron

What do you think when you hear Grill Tennis? Maybe you envision someone grilling tennis balls or maybe even playing tennis will grill racks.

According to the about section of the translated GrillTennis Facebook page, “GrillTennis is a ketchup game for two-man teams, where you must try to hit a ball into a cup that is placed in a ball bar. The sport was invented approx. in 2000, but the concept and style were only tightened when the founder and event maker Ole Huld reopened the game in 2013. There are ongoing GrillTennis events – both public and commercial events for companies, tourists, families and other groups. Contact GrillTennis at mail hej@grilltennis.dk and see more at grilltennis.dk.”

How did Grill Tennis make it to Puget Sound all the way from Denmark?

Lars Defty, president of the Grill Tennis Club, stumbled across a tournament while he was in Copenhagen, Denmark this summer.

“I met sporting revolutionary Ole Huld, the creator of Grill Tennis. It is now played professionally in Denmark; they have a summer-long competition called the Glory Cup as well as the Danish Open in the fall,” Defty said.

Defty and his friend Ian took part in the tournament they stumbled upon and managed to win the Finale. They were then invited back by Ole and his team, to compete the next day in one of the official tournaments.

“Despite the intense pressure, we made it to the Finale again, only to be defeated. While it was a tough pill to swallow, so to speak, it was one of the greatest experiences of our entire trip,” Defty said.

Don’t be intimidated by the sports name, because it is a simple game to play.

In order to win the game the team must score the most points but you also must have class. The professional Grill Tennis plays tend to wear attire similar to that of tennis and lots of stripes. Participants are encouraged to have self expression so some prefer to wear jean shorts, jerseys or even suits.

For the point side of the game Lars describes the possible ways to earn a point value.

When cheering on a fellow Grill Tennis participant it is customary to snap instead of clap. Clapping is forbidden in this Danish sport. After the new year, try something new like Grill Tennis or maybe even go watch the tournaments and culture for yourself.

“I soon realized that the quirkiness of Grill Tennis could be a big hit here at UPS. I will never forget the feeling of scoring my first Bold i Grill and I wanted to share that feeling with others,” Defty said.

The Grill Tennis Club has a tournament every Friday at 4:30 or 5 p.m. in either the Tahoma Room, Thomas Hall or the Tennis Pavilion. For updates about the events, follow the Grill Tennis Instagram account @grilltennispugetsound.