Both men’s and women’s Rugby have been playing strong since returning from winter break and don’t plan on stopping their momentum anytime soon, looking to playoffs in April.

The men’s team has won all three games this year  and the women’s team has only been dealt one loss since the end of winter break.

“Ruggers are notorious for being lifelong friends and guys connect real quick in our club or ‘family’ as we call it. This year we have made huge strides in bringing the men’s and women’s teams together, and we’ve seen a lot of success there,” Thompson said.

Bonnie Shultz (Santa Fe, New Mex.), a first-year student, added her thoughts on the chemistry for the women’s team, which is quite strong as well.

“Our chemistry is good, it’s hard to be a cohesive team if there’s any cattiness, so at the beginning of the year one of the senior girls said if you have a problem with another girl bring it up with her directly, that isn’t something you bring to the field,” Shultz said.

The results have shown that the chemistry is truly strong, and that is impressive; it’s hard to keep a team together throughout the season and both teams have been able to so far. The chemistry helps, but what happens on the field can be the greatest factor. With the women’s rugby team, it’s all about form.

Shultz added more on this thought.

“For success a large thing is making harder and more successful tackles, but we’re also just out there to have a good time, so I guess that depends on one’s definition of success,” Shultz said.

For the men’s team, it’s all about hard work. Thompson brought in some thoughts about this idea.

“Our success has come from hard work on Tuesday and Thursday nights. We only have a few hours a week to hone our skills, and this semester we’ve really upped our game with three wins and no losses,” Thompson said.

Success comes with goals, and both teams have them. Promoting the sport is an important goal, while enjoying Rugby is just as important.

“As a whole, the team can work on bringing others into the sport and promoting their love of rugby. We have many seniors who are leaving this year and they will be dearly missed, but looking to the future and bringing in more players is one of our primary goals,” Thompson said. “On the field, we hope to bring a trophy home at the end of this semester.”

On the women’s side, it’s all about understanding the game and having fun playing.

“Our team’s mentality is that we’re all still trying to kind of get a grip on the game since we’re all (mostly) so new to it, but we’re just doing our best and supporting each other and having fun,” Shultz said.

Both teams are focused and ready to go, as the important part of the season has yet to come. 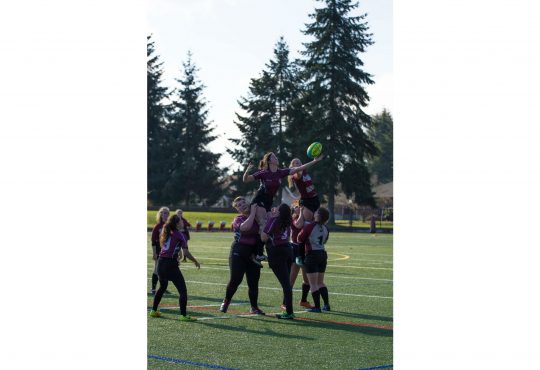