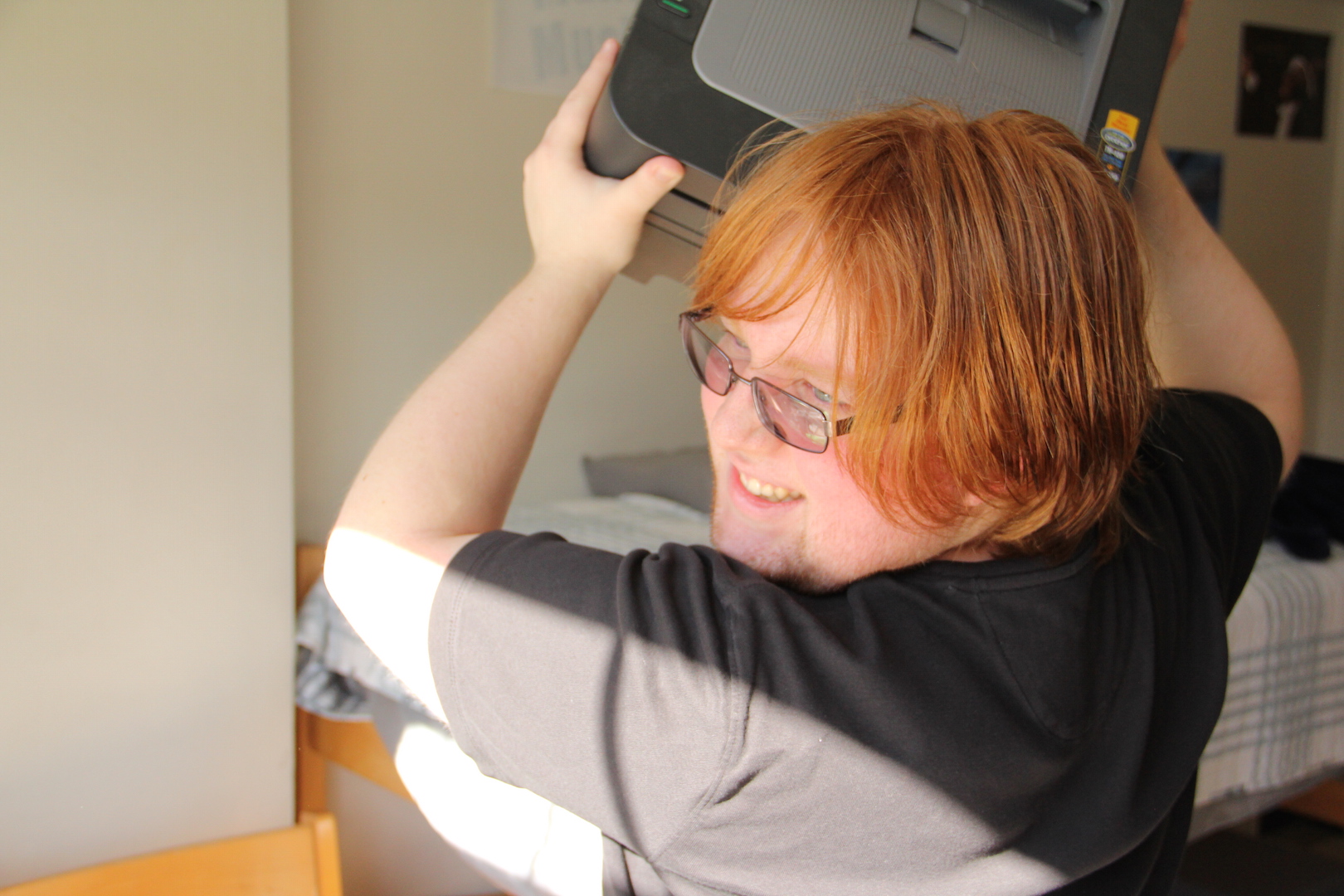 ophomore Jack Kelly sits at a table on the first floor of Collins Memorial Library, furiously writing with a Pilot G2 in his notebook.

“I’m out of PrintGreen points,” Kelly said. “Five weeks into the semester.”

Kelly is on page 13 of 35, hand-copying a short story from Moodle which he is supposed to read.

“We have to bring in a hard copy,” Kelly said. “I thought eBooks were going to be­ okay—this shouldn’t take more than four hours and I absorb the information better if I write it down anyway. I’m a visual learner, so.”

Technology Services began monitoring printing on campus in August 2011 after one student used Collins Library to print four copies of David Foster Wallace’s novel Infinite Jest. While the student had good intentions, saying he merely wanted to educate his peers, the University considered the project a waste of resources.

“No one was going to finish it anyway. Why print the last 600 pages?” the Director of Technology Services said.

“During Spring 2013, the average number of prints per student was 375. The median number of prints (half of students print less and half more) was 329.  Only 167 out of 2,633 students printed over 750 prints in Spring 2013. As shown below, the 750 print allotment per student ensures the vast majority of students will not pay for any printing. The only students incurring costs will be those who choose to print in very high volumes,” Puget Sound’s website reads.

Sophomore and Politics and Government major Taylar Vajda, has adjusted to the PrintGreen program and taken the steps necessary in order to ensure both her academic success and her financial well being.

“I’ve started printing my readings 24 pages to a page. Actually 48 to a page, it’s 24 to a side of a page,” Vajda said. Vajda uses a magnifying glass she bought at the dollar store to read Marx’s Estranged Labor. Highlighters are too thick, so she uses a toothpick dipped in ink to underline and highlight passages.

“I’m exercising my eyes,” she said, rubbing her temples and blinking rapidly. “I love it.”

PrintGreen ensures that the majority does not have to pay printing costs; however, this is at the expense of the minority. Like Mitt Romney, the Puget Sound student body is beginning to become concerned about that top 1 percent; only in this scenario, it’s the top 6.3 percent. Your Politics and Government majors, your English majors, your History majors, your Religion majors—these are the 6.3 percent. It’s particularly cruel to charge these students for their extra printing because they’re going to find it harder to get well paying jobs after college. In allowing the Less-Than-326-Pagers to pay less money for printing, the University is displaying blatant majorism, favoring math and science majors, a group that already has a step up in society.

When asked how she thought PrintGreen was saving the environment and saving students money, when most people didn’t use up their allotment anyway and the ones who did were forced to pay more money in order to complete assignments, she responded by saying that she didn’t know but that she had to go lie down because she had a migraine.