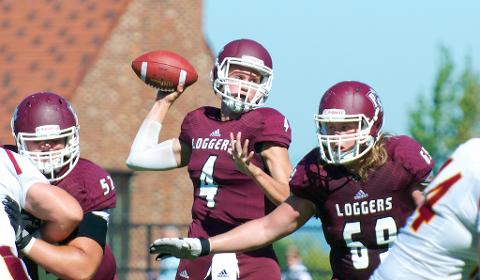 he Logger football team opened up its season with a week-one victory and a week-two defeat.

In the season opener against Clairemont-M-S (three colleges with one athletic department) the Loggers won 13-10.

This was Gilbert’s first game back since injuring his shoulder against the Bearcats on  Nov. 10, 2012.

“It feels great being back out there on the field.  It’s great being able to play with all my friends again,” Gilbert said about his return.

Senior corner back Nassar Abdelrasul (Salem, Ore.) had the team’s third interception with a minute and 45 seconds left in the first half.  Abdelrasul returned the interception for 40 yards, setting up sophomore quarterback Hans Fortune (Kenmore, Wash.) for a touchdown pass.

On the offensive side of the ball Fortune from was 8-15 with 85 yards and one touchdown pass.

He came in for senior quarterback captain Brandon Fowley from Bothell, Wash. after Fowley injured his shoulder at the end of the second quarter.

The touchdown pass from Fortune went to senior red-shirt junior Kevin Miller (from Seattle, Wash.)  Miller finished with four catches for 46 yards and a touchdown.

“It was unfortunate he [Foley] got hurt,” Fortune said. “But I was ready and excited to get into the game.”

The 10 points allowed were the lowest total that the Loggers’ defense allowed since Nov. 13, 2007 against Willamette when they beat the bearcats 13-7.

The following week the Loggers traveled to Eagle Rock, Calif. to play the Occidental Tigers.  The Loggers lost in a 35-32 effort.

Going into the fourth quarter the Loggers trailed the Tigers by 15.  The Loggers’ comeback started eight minutes into the quarter when Hans threw an 11-yard touchdown pass to sophomore receiver Dustin Harrison (Orange County, Calif.)

The Loggers recovered junior kicker Sawyer Petre (Denver, Colo.)  on side kick on the proceeding kickoff.  Petre was two for three on on-side kicks in the game against the Tigers.

Hans finished the game 34 for 60 with 533 yards passing, five touchdowns and one interception.

The Loggers’ offense finished with 571 total yards.  The run game for the Loggers produced 35 yards on 18 attempts. They were averaging 1.8 yards a carry.

Coach Jeff Thomas felt that the offense was lacking in execution at the beginning of the Occidental game, especially in the run game.

“As a team we need to do much better in the run game,” Thomas said. “We need to at least rush for 100 yards a game because it will open up the passing game.”

Against the Stags, the Loggers finished with 105 rushing yards.  Consistency in the running game is a future goal for Thomas and his team.

Thomas is not worried about his running back scenario.  Wagner will be out for an indefinite amount of time but Frazier has taken reps in his absence.

Thomas and Hans agree that Frazier is an extremely talented running back that the fans should keep a close eye on.

They described some of his runs as the most spectacular and fun.

The Loggers will have two weeks to prepare for their conference opener against the Lewis and Clark Pioneers on Oct. 4.

The Pioneers lost their first two games against of the season against Whitworth and Claremont-M-S. The Pioneers has graduated quarterback Keith Welch.

During the two weeks leading up to the season opener the Loggers will focus on consistency in their offense and tightening up their defense.

“Against Claremont we just flew around and played great team defense.  We came up with turnovers when we needed them,”  Gilbert said. “During the game against Oxy we drifted away from executing our specific jobs on defense which opened up holes for their offense to attack.  Also we had no turnovers.”

There are no first year starters on the Logger defense this year.

In the last couple of years many first years started on the Logger defense.

“The maturity of the defense is the biggest difference from this year and last year,” Thomas said. “All the guys on the field have experience in the defensive system; they understand what their job is.”