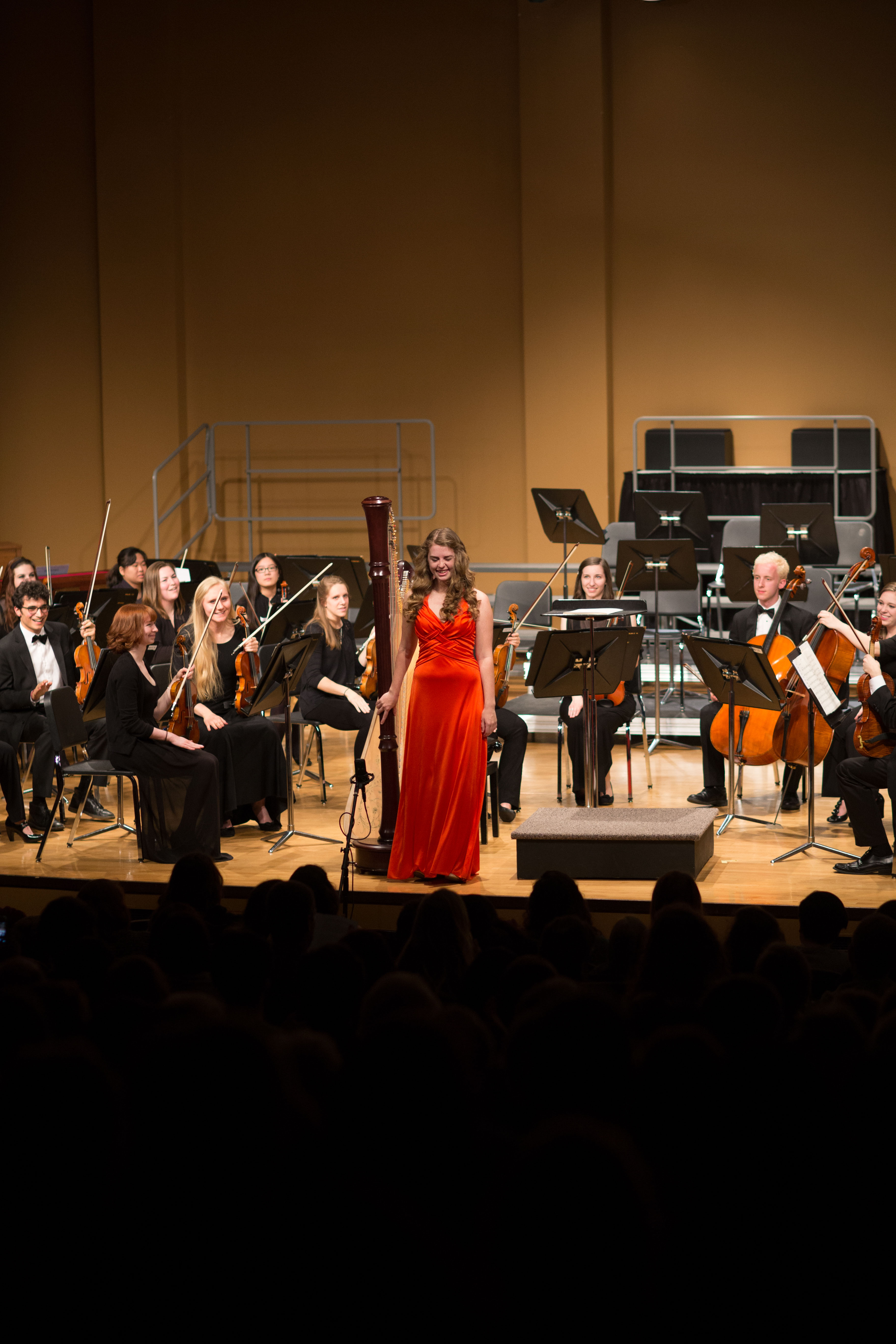 The University of Puget Sound orchestra’s talent never ceases to astound audiences. Such was the case on Friday, April 25 when the Symphony Orchestra, Adelphian Concert Choir, Voci d’Amici, Chorale and Dorian Singers collaborated for the Final Thoughts concert in Schneebeck Concert Hall.

In today’s society, appreciation for classical music en masse is highly influenced by the way the orchestra entices its audience, stirring souls with music. The performers drew upon a wide array of emotion, moving even hesitant attendees.

Their first piece, the “Requiescat,” composed by William Mathias, began the concert on an anxious note to liven the audience. The tension of wild violins cutting through the air with apprehension followed by a tumult of brass and strings put the audience on the edge of their collective seats.

However, the concert did not keep the audience on edge. Following the first chaotic piece, freshman Frances Welsh accompanied the Symphony Orchestra with her harp, enchanting the audience with “Danses Sacreé et Profane,” a piece composed by Claude Debussy. The musicians perfectly captured the ethereal and joyous qualities of Debussy’s piece, which seemed as though it belonged in the score for a movie featuring a romantic reunion.

The first act ended with an epic rendition of the overture to the opera William Tell, composed by Gioachino Rossini. The piece began with a lighthearted yet uncertain tone before eventually erupting into the classic theme of “The Lone Ranger.”

The show concluded with a multi-part “Requiem” composed by Gabriel Fauré for which the Adelphian Concert Choir, Voci D’Amici, Chorale and Dorian Singers joined the Symphony Orchestra in a powerful, haunting, melodic, wild, dramatic and occasionally playful rendition of the piece. The choirs added a complex touch to the piece and the combination of four groups demanded an extra level of commitment from the performers.

“Since this major work is being performed by all four choirs, it often seems like your voice is lost in the mass of people performing. However, each and every voice is vital to the overall sound and quality of the group. As an individual performer, in order to create a uniform and cohesive sound I know I must, along with every other singer, work to match the quality and tone of the voices around me and focus on listening more than singing,” freshman Dorian singer Olivia Anderson said.

This astounding performance was also a rare treat for its attendees.

“We only combine all the choirs and the orchestra for a combined work every three years. It is always memorable to watch everyone¹s faces light up when they hear each other all together for the first time,” Doctor Steven Zopfi, conductor of the Adelphian Concert Choir, Voci d’Amici and Chorale, said.

The infrequency of this sort of collaboration lends itself to a more sophisticated performance in general.

“As we only do this every three years, it is really special to explore these great choral-orchestral masterworks when we get the chance. They require large forces and lots of practice to do them justice so it is treat to be able to work on them,” Zopfi said.

As classical musicians, the orchestra and choirs are unfortunately underappreciated, especially in a society dominated by pop and rap music.

Thankfully, Final Thoughts provided a venue for this music to be enjoyed without judgment.

“The music that is performed by ensembles and individual performers of the School of Music is not typically from genres that are popular with our generation. Additionally, a good portion of the concerts that we put on are free. Everyone—not just members of the UPS community—has the opportunity to come and listen to beautiful music that they might not have had a lot of exposure to, performed by some of the most talented musicians I have ever met. It’s an opportunity to try new things and learn something unusual. I think that could be valuable to anyone,” sophomore cellist Carolynn Hammen said.

The talent of the Puget Sound musicians is undeniable. Final Thoughts both delighted its audience and bid adieu to the senior musicians who will graduate this month.

While this performance was a special one, the Tacoma community would be remiss to neglect seeing these performers in the future.