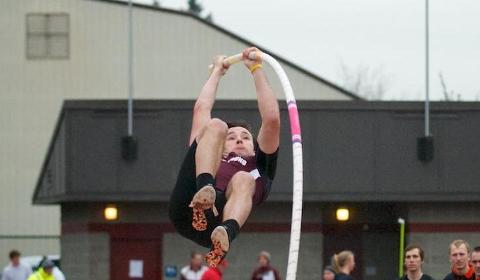 The Logger track squad put up impressive numbers this weekend on their home turf during their annual quad meet on March 1. Twenty Logger competitors booked their tickets to the Northwest Conference championship that happens at the end of April.

The quad meet had the Loggers competing against athletes from Lewis & Clark College, Western Washington University and Seattle Pacific University.

Among the most impressive performances last weekend were the distance runners. The distance teams put a total of nine runners into the championship meet, more than any other category in the quad meet.

Kathryn Flyte (West Linn, Ore.) qualified running the 10,000 meter race with a time of 36:47.00, a time that earned her the sixth spot on the top 10 finishes at that distance in school history. Tori Klein (Yakima, Wash.) and Tali Ni (Sacramento, Calif.) also qualified for the women’s squad.

In the men’s 10,000 meters, Justin Higa (Pearl City, Hawaii) and David Stantillan (Milwaukie, Ore.) qualified for the championship meet. Other qualifications in distance running came in the 3,000 meter steeplechase. Molly Bradbury (Boise, Idaho), was the sole qualifier in the steeplechase for the ladies with a time of 12:21.10.

Two athletes qualified in the high jump at the quad meet. David Lovitz (Portland, Ore.) and Steven Branham (Gold Bar, Wash.) qualified by jumping higher than 1.80 meters. Cerne earned his second qualification of the day by clearing the pole vault by 3.94 meters.

Following their teammates’ lead, Maggie Rowe (Helena, Mont.) qualified by clearing 2.46 meters in the high jump, and Elizabeth Hegedus and Sunny Lewis (Tacoma, Wash.) qualified for the women’s team with clearances of 2.50 meters and 2.95 meters respectively in the pole vault.

The first place finishers for the men were Cameron Braithwaite (Port Angeles, Wash.) in the long jump, Branham in the high jump, Seekatz in the steeplechase and Everett West (Anaheim, Calif.) in the 200 meter dash.

The women saw similar success as they came in second place with 38 points and had five first place finishers on the books.

The ladies finishing first were Burns in the 1,500 meter race, Flyte in the 10,000 meter run, Bradbury in the 3,000 meter steeplechase, the ladies ‘A’ relay team and Rowe in the high jump.

The next meet will be a quick journey as they will travel to the PLU Invitational in Parkland, Wash. The meet begins at 9:30 a.m. on Saturday, March 8.