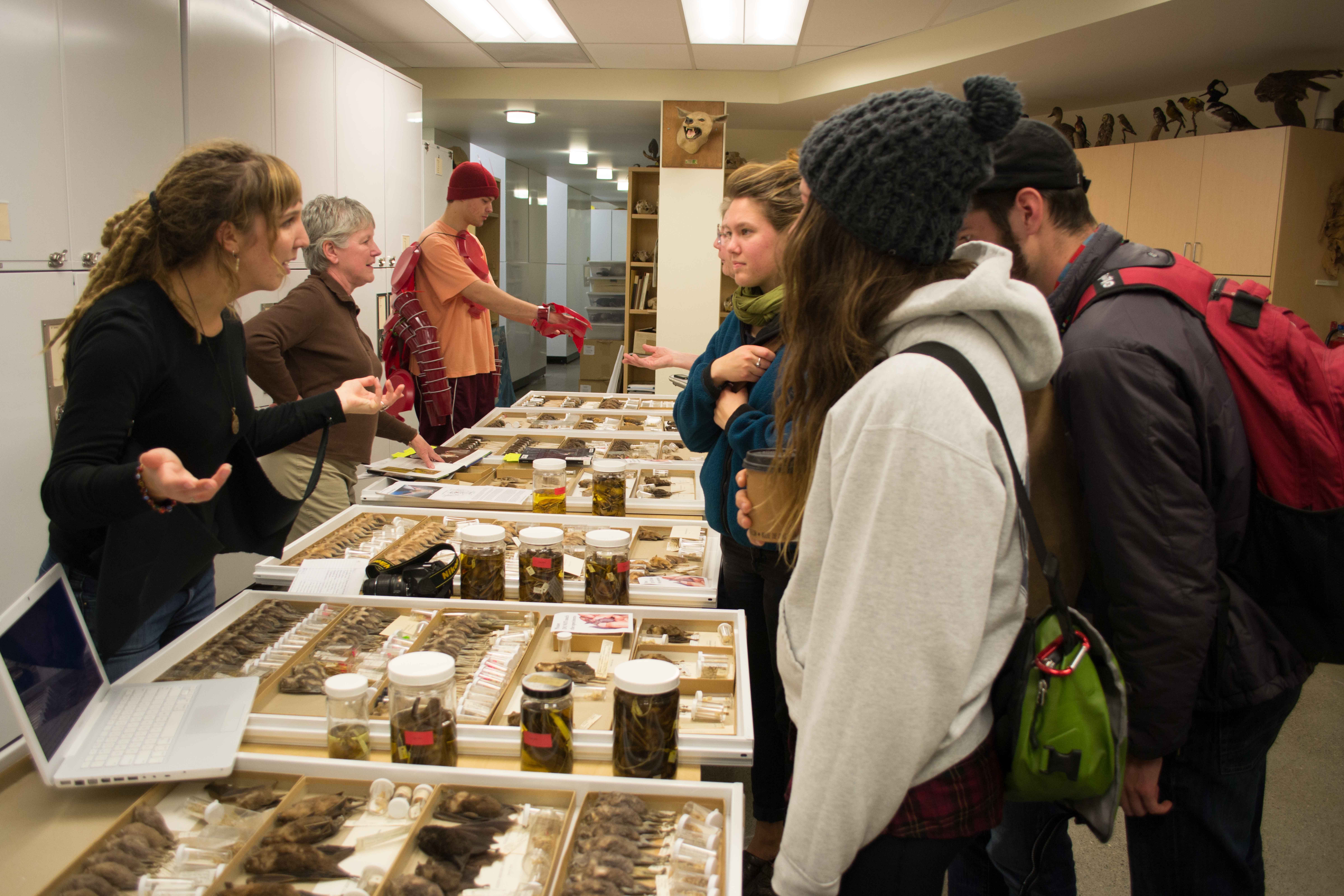 Oct. 30 marked Slater Museum’s second Night at the Museum, “Bats.” This event, which drew a large audience from both the Tacoma community and Puget Sound, had several bat specialists from the community and a live bat from Point Defiance Zoo and Aquarium.

Wyatt Sherwood, age three, was very excited about the live bat. “An alive one? Let’s go!” he said. Sherwood, dressed as a bat himself, wasn’t the only person interested in Indie, the Giant Indian Fruit bat. From the moment Indie arrived with his caretaker, Karen Povey, a ring of eager onlookers surrounded him.

“We have a longstanding relationship with the Point Defiance Zoo and Aquarium,” Mary Krauszer, Slater Museum Education and Outreach Coordinator, said. When the Zoo heard about Bat Night, they offered to loan a bat to the museum to help educate people about bats.
“We have a group of animals that were raised and trained for doing this exact sort of thing.” Povey said.

Indie, a 15-year-old male, is one of these animals. He hung upside down from Povey’s arm, looking back at the children and occasionally stretching his wings.

“When he’s all the way stretched out, [his wingspan] makes three feet. [Though] the largest bat in the world [the Samoan Fruit bat] has about a six-foot wingspan, if you can believe it,” Povey said.
“We call him a starter bat, because so many bats are creepy-looking with all the weird things they have on their faces. Those bats echolocate, so that’s why they look the way they do,” Povey said.
Giant Indian Fruit Bats’ diets consist of fruit, so they do not need to hunt down their food in the same way as bats that eat insects do. Indie’s face therefore looks more like that of a dog or fox, which is why he is in the category of bats called “flying foxes.” Indie also has great eyesight, a characteristic not usually associated with bats.
To anyone who became inspired to look into having a bat as a pet, just remember that it is against the law to do so.
Though Indie looked very comfortable and friendly in the crowd, Povey reminds us that he is still a wild animal.

“The nature of a wild animal is to be much more reactionary than a pet,” Povey said. “He’s not bred to have those calm qualities, [they] are more trained in him than inherent.”
“The last thing I want to do is that by bringing him here, have people go away thinking about how [a bat] would make a great pet. It’s a bad idea. Having said that, he is a really great animal,” Karen said.
Indie has been handled and raised to be in situations like the one at Bat Night, but his good behavior had more to do with his personality than him being a bat. Even being trained by professionals his whole life, Indie is still quick to bite.

That aside, Indie was a wonderful learning experience for everyone involved. He was the life of the party, so to speak, and he was kind of cute.
“Kind of cute? He’s incredibly cute!” Povey said.
Though Indie and his caretaker were crowd pleasers, there were many other exciting things for visitors to explore.

One of those was a bat sound and guano display courtesy of Greg Falxa, a bat researcher for the nonprofit Cascadia Research.
At the display, anyone who was interested could examine the guano of different species of bats under a microscope. Similar to owl pellets, it is possible to determine the species of bat just by their droppings because the diet differs from species to species.

Falxa also brought a collection of bat noises for people to listen to.
Though our human ears cannot pick up the sounds that bats use for echolocation, it is possible for technology to pick them up and drop them to a frequency that we can hear.
The prep room, as always, was open for the brave souls who wanted to see what it takes to go from roadkill to the specimens that are on display.
“It’s not a specimen until it’s skinned and stuffed or dried or pickled,” Krauszer said. “It gives people insight into the process of creating a collection.”
In this room, visitors could actually touch a bat’s wing, or examine closely the needle-sharp teeth that bats are equipped with.
Another change from the previous Night at the Museum was the creative costumes that the docents were wearing; they were a step up from the decorated Organism Hats they previously displayed.
“The docents of their own accord decided that they should wear costumes. We might as well, it’s October 30 and we are animal enthusiasts,” Krauszer said.
Most of the docents, along with several guests, were dressed for the occasion as bats, though there were a dragon and a lobster teaching about bats as well.