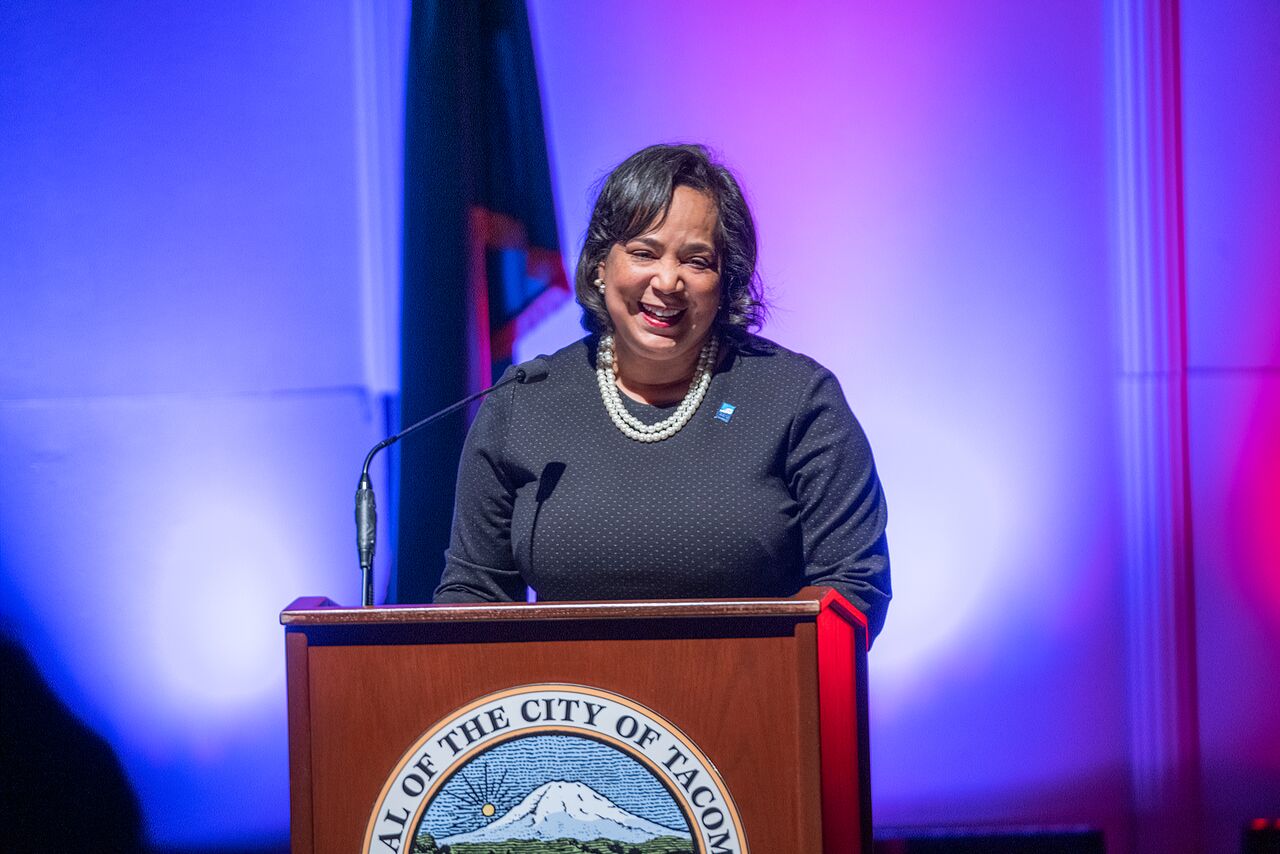 “We are the city of destiny, and we are moving forward,” Tacoma mayor Victoria Woodards exclaimed last week in Schneebeck Concert Hall. On March 6, Woodwards delivered the 2019 State of the City Address at the University of Puget Sound.

Several community members contributed to this event by performing or speaking in introduction. The T.U.P.A.C. Dancers performed, as well as the Tacoma Refugee Choir and the Puyallup Canoe Family. Emcee Clemencia Castro-Woolery, along with outgoing Associated Students of the University of Puget Sound President Colin Noble and Rabbi Bruce Kadden, gave opening remarks. A video adaptation of the poem “Destiny is not a Metaphor” by poet Laureate Kellie Richardson was also shown as an introduction to the address.

In her address, Mayor Woodards focused on a few key topics including transit, infrastructure, affordable housing, tenant protections, recycling and living wages. In terms of transit, Woodards discussed the expansion of the Tacoma Link throughout the city, including the extension to the Tacoma Dome and the new extension. In November 2018, the city broke ground on the extension of the Link system from downtown to Hilltop, a 2.4-mile extension that will open in 2022 if construction stays on schedule.

Housing was another important topic at the address, with a specific focus on increasing tenant protections. Woodard discussed the issues of apartments raising rent or being converted for commercial use without giving adequate notice. She shared stories about tenants whose rent was raised several hundred dollars and were only given 20–40 days notice. Most of these resulted in the previous tenants’ homelessness. To combat this problem, the Office of Equity and Human Rights created legislation that has been in effect since Feb. 1 that calls for 120-day notice and relocation assistance for low-income tenants.

“There is no way to address it [the issue of homelessness] without ensuring our community has enough affordable homes,” Mayor Woodards said.

Woodards also discussed projects regarding Tacoma’s infrastructure, specifically focusing on Tacoma’s streets. In the last year, the city has repaired 3,600 potholes and improved 659 blocks of Tacoma streets. Woodard also praised the Public Works team for their hard work, and stated that they won the American Public Works Association 2018 Project of the Year Award for the Tacoma Avenue South Bridge rehabilitation project.

Recycling was another important topic in the address. Woodard discussed the changes in recycling policy that have occurred in the last year as a result of China’s 2018 ban on many recyclable products. Whereas Tacoma was previously able to recycle plastic types 1-5, only 1 and 2 are now recyclable. Woodard stressed the collaborative approach to this issue, asking citizens to weigh in via an online survey. Several different approaches have been proposed, including the removal of curbside recycling all together.

Collaboration was a recurring theme throughout the address. Mayor Woodard emphasized the importance of collaborating with the city council, community partners and citizens. “While I am honored and blessed to serve as your mayor, you also have eight incredible city council members working very hard with our community partners each and every day,” Woodard said.

Overall, Woodard emphasized the positive aspects of the city’s growth and improvement, and seemed optimistic about Tacoma’s future. She emphasized the need for collaboration and community involvement.

However, there were a few topics that Woodard seemed to overlook. She discussed the state of the Tacoma Tideflats briefly, but did not mention the liquefied natural gas plant that Puget Sound Energy is building there. Woodard also quickly discussed the Legal Defense Fund for Immigrants, a project spearheaded by City Council member Keith Blocker. The fund was approved for ongoing funding in the Tacoma city budget. She did not, however, mention the Northwest Detention Center (NWDC), which is located on the tide flats, and one of the largest detention centers in the United States.