The University of Puget Sound President has a great name for radio. Even more impressive is his knowledge of Woodstock and Bob Dylan.
Kicking off the KUPS open house last Thursday, President Ron Thomas sat on a barstool across from DJ Mel Köhler and turned the tables back half a century with his playlist of Bob Dylan songs that were performed by other artists at Woodstock Festival in 1969, which was a year after KUPS was founded—another mile-marker in music history, President Thomas was quick to point out.
Like any good radio show, the theme for this show was evident from the moment DJ RonThom talked about his opening song, Joni Mitchell’s “Blonde in the Bleachers.” He used that to introduce Woodstock to the playlist and continued to play only songs written by Bob Dylan.
Always one to make the most out of his time, he used his airtime as preparation for a presentation he will be giving for a class on the history of 1960s music.
As a result, we lucky listeners were inundated with information. Did you know that the only song played more than once at Woodstock Festival was Bob Dylan’s “I Shall Be Released?” And Bob Dylan was not actually at the festival. Artists like Joe Cocker and Joan Baez played his songs. The short musical history set had a big impact.
There is something to say about the way in which our University President speaks. His speech is humorous and graceful. It would be wise to take DJ advice from him. He is poised and smooth. My mother—who was visiting the station with me—appreciated not only the music from her past, but also his radio banter. She admitted that was something my own radio show lacked.
Not to be outshone, DJ Köhler provided the listening ears to DJ RonThom’s lessons. She fluidly reminded listeners that KUPS was the station providing the unique information and having the open house event.
The event was truly open. There were enough people in the studio that the president joked there might be a few feet of space for more visitors. The open house brought a crowd to the station comparable to the crowd that stormed the station for the 2009 MTV Woodie Award, and that sometimes returns for shows put on by The Fab Five, a band comprised of several KUPS personalities.
Looking through the windows into the production room, last-minute details were still being sorted out. New lights, bedazzled fans and colorful soundboards brighten up the station. But no worries, the plaid orange couch, probably decades old, provides relief for those a little resistant to change.
Ironically, the warnings of former operations manager Doug Herstad, “Don’t let the alligators into the station,” has been trampled over by alligators. The new funky logo is now on posters, stickers, in the hallway and on the turntables. I’m sorry Doug, but the alligators have entered the station.
Immediately following DJ RonThom’s guest appearance, the open house featured student artists, DJs and poet/activist Jared Paul, who spoke later in the week in the Rotunda.
Situated in the first week of radio shows, the open house was an amazing kick-off for a new year for KUPS. More importantly, it was the start of a potential new career for President Thomas, who really should consider pursuing a future in radio. With a passion for Bob Dylan, a mind for facts and experience as a music appreciator I predict his time on the radio is far from over.
To tune in to more KUPS shows visit KUPS’s new website: www.kups.net for the weekly scheduled shows. 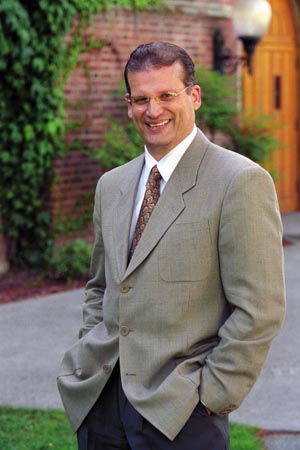