As the regular season for Puget Sound’s women’s volleyball team wound down, the Loggers stepped up their game in a big way to keep their postseason dreams alive. On Wednesday, Oct. 31, Puget Sound celebrated Halloween in style with a sweep of their major Northwest Conference rivals Pacific Lutheran University (20-5, 14-2 NWC) for the top NWC finish.
The match opened on a dramatic note, with the Lutes and the Loggers battling it out. After coming back from a 19-13 deficit in the opening set, junior Jackie Harvey (Santa Barbara, Calif.) and freshman Emily Convery (Portland, Ore.) finally clinched the first set 31-29 for the Loggers with two consecutive kills.
The second set also went the Loggers’ way, with Puget Sound emerging victorious with a 25-22 win. In the third, the Lutes fought back and gained an early 7-1 lead, but the Loggers were unfazed and went on to secure the final set 25-22 to complete the sweep of the top conference team, PLU.
Freshman Danielle Westerman (San Francisco, Calif.) put on an impressive performance, hitting .320 with 10 kills and recording four blocks, including one solo one, for the evening.
Coming off of the tremendous victory over PLU earlier in the week, Puget Sound carried their momentum and stellar play forward to clinch a straight-set victory 25-14, 25-19, 25-20 over Lewis and Clark in their final match of the regular season on Nov. 3. The superb performance of the Loggers was just too much for the Pios, who never had more than a two-point lead throughout all three sets.
Junior Christina Chun (Pearl City, HI) excelled from the back of the court, recording three aces and 18 digs, while Harvey had 19 digs. Junior Marissa Florant (Palo Alto, Calif.), Harvey and sophomore Nicolette Reynaud (Los Gatos, Calif.) each recorded nine kills in the match. With the win over Lewis and Clark, the Loggers clinched their second place finish in the NWC behind PLU, who secured the top conference spot with a win over George Fox on Friday, Nov. 2.
The fate of the Loggers in the post-season NCAA tournament was up in the air at the end of the regular season. Although the Loggers clinched their much-needed victory over Lewis and Clark to keep their postseason hopes alive, they needed a PLU loss to George Fox to guarantee both a NWC conference title and an automatic spot in the NCAA tournament.
Unfortunately for Puget Sound (19-5, 13-2 NWC), the Lutes retained their hold on the top conference spot and an automatic entrance into the NCAA tournament with their 3-2 win over George Fox on Friday, Nov. 2. Regardless, based upon the level of play in their final regular season games, the Loggers, who finished the regular season in second place behind PLU, remain confident in their ability to compete and perform well in the NCAA tournament.
This confidence paid off, as the Loggers were awarded a berth in the NCAA Tournament for the fifth time in the past six years.
“These last two games this week were awesome, yes because we won, but mainly because our team chemistry has been so good on the court,” Harvey said. “Everyone is clicking together after all of our games, and that is a huge reason why we won these last two conference games.”
“These past games this week have just really ended our season on a high note as we hope and expect to move on the post season to the Regional tournament. They have also moved us up to third, maybe even second place in the regional rankings depending on the votes tomorrow. Getting these wins, especially that big win over PLU, to end the season has strengthened our confidence heading into the tournament, and I feel prepared for anyone we go up against!”
“I was very impressed with our ability to go on the road in the last week of conference play, in must-win situations, and to sweep both teams on their home courts. I believe our high Regional NCAA ranking will give us an at-large berth in the Regional tournament this next week,” head coach Mark Massey said.
“We have four wins this season over teams who are automatic qualifiers into the tournament. Of course, we are always excited to have the opportunity to represent Puget Sound nationally. I feel our team is maturing, and I believe we are capable of beating most of the teams in the nation if we execute our game plan effectively.”
Puget Sound will head to Thousand Oaks, Calif. tonight, Friday Nov. 9 to face Colorado College in regional draw of the first round of the NCAA Tournament. Let’s go Loggers! 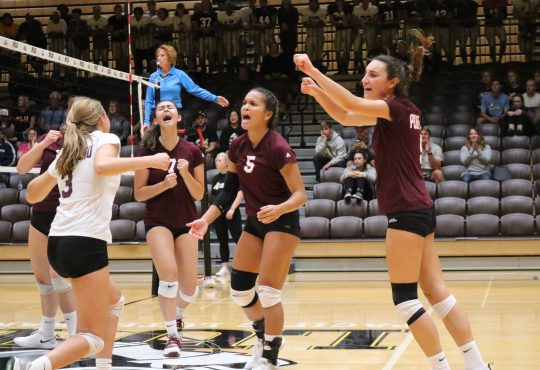 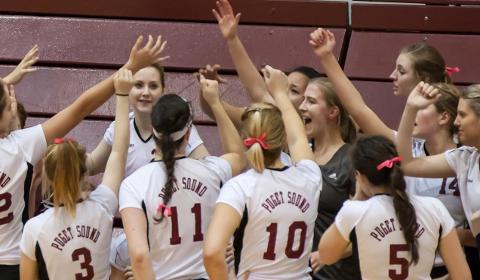