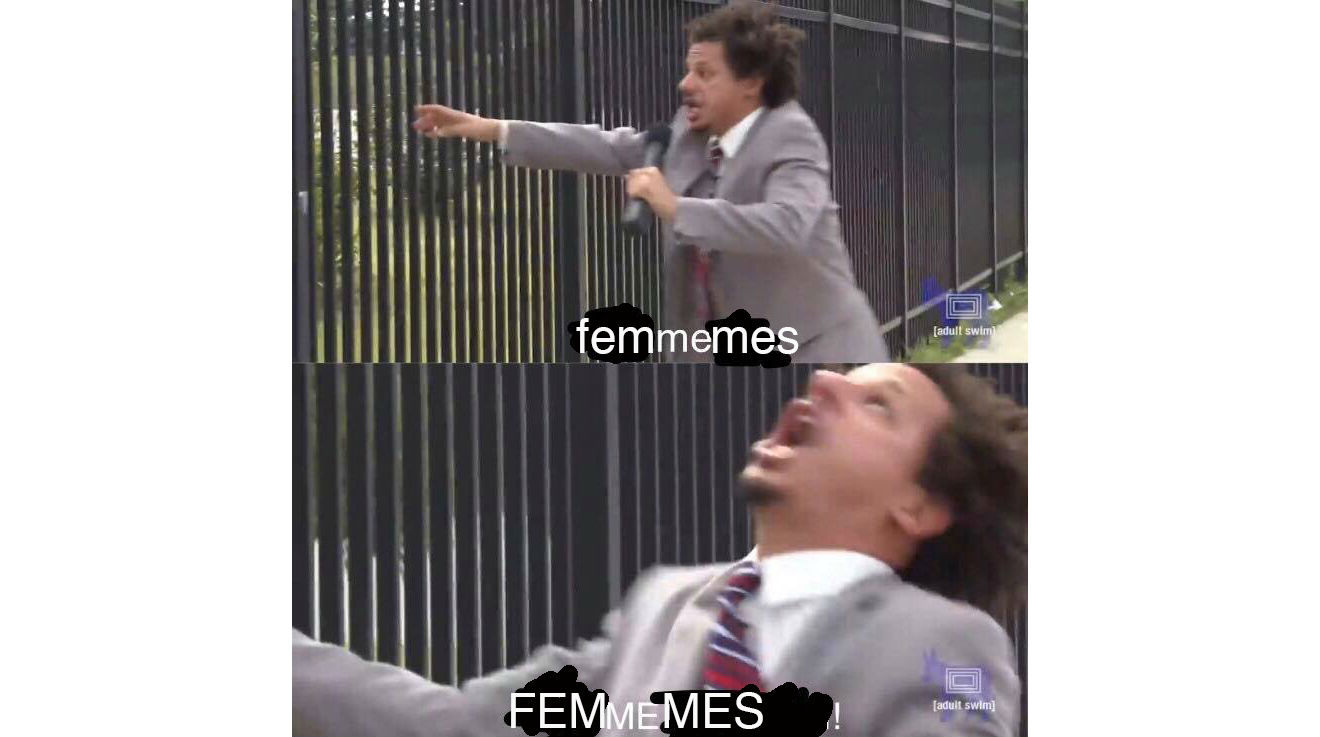 Adult Swim, the channel on which the oft-memed “Eric Andre Show” runs, prides itself on its envelope-pushing content. However, it has a creative and administrative staff of almost entirely men and the responses to their cancellation of Million Dollar Extreme demonstrate the vocal “anti-SJW” (Social Justice Warrior) portion of their audience. Behind and in front of the screen are mostly cis men, largely creating content for themselves. Reappropriating these memes in spaces like femmemes is an act rejecting that imbalance of creative and cultural power. — Illustration by Molly McLean

Four years ago during the spring semester of 2016, a meme page was born. Though the page is not affiliated with Puget Sound, Hannah Houser ‘18 founded it and invited other Puget Sound students to join.

The description of the page says: “femmes sharing memes ~better than sex. femmemes was created as a rejection of male-centric internet culture. this space is for femmes to share their dankest memes and golden internet finds.”

Since then, the group has spread across campus and across the world. It now has nearly 4,000 members, including many who do not attend Puget Sound, and gets new members and new posts nearly every day. The group’s cover photo is of a T-shirt that says “Women Against Men Making Art,” but with ‘Art’ crossed out and ‘Memes’ in its place.

In the beginning years of the page, the majority of the memes posted were directly related to being a femme on the Puget Sound campus and many memes were homemade by Puget Sound students. In this context, the term ‘femmes’ includes all women and nonbinary people, even though historically it has been used to describe a more feminine-presenting lesbian.

Posts included humorous ‘starter packs’ (memes with a collage of images of what you’ll need to take on some sort of label or identity) for privileged students, newly out LGBTQ+ women, high-achieving and stressed-out students, those engaging in one-night stands, and especially poked fun at the misogyny that is still felt by college-aged femmes. Other common posts included screenshots of tweets or Tumblr posts that call out niche forms of misogyny or homophobia that are experienced specifically by Puget Sound femmes and posts celebrating women or nonbinary people through expressions of sexuality, art and humor. There were also many posts that had nothing to do with being femme specifically but were posted so that femmes could interact with the humorous content in a safe(r) environment.

Laure Mounts joined femmemes two years ago and posts memes on the page frequently. She said that she has appreciated being a part of the group not only because the memes are really funny, but since “they’re often focused around the femme experience in a way that most regular meme pages aren’t, and are very rarely problematic or triggering.”

In the four years since the page was started, Mounts said that the group more publicly recognizes intersecting identities.

“I think it’s changed to be more accepting of different types of femmes, and even to be more aware of the privilege that a lot of us hold beyond our femme identity,” Mounts said.

Additionally, Mounts appreciates memes posted on the page that aren’t necessarily about being femme. “I like that it also tends to be a very queer page, which I relate to and enjoy seeing memes about,” she said. “I think it also involves a lot of mental health memes rather than just specifically femme-related memes that it didn’t use to.”

“I do feel like the page bands together femmes on campus,” Mounts said. “Maybe not in a super visible way, but it definitely warms my heart when my friends and I can bond over a post, or if I see something I find super relatable and I know the poster relates to that experience as well.”