After working in law and public policy for more than 30 years, Eric Holder, Jr. visited the University to lead a discussion entitled “Principled Leadership.”

The members of the campus and local community gathered in Schneebeck Concert Hall to hear Holder speak about his controversial career and share his personal experiences as the first African American attorney general of the United States. This interactive discussion took place on March 3 at 8 p.m., leaving a remarkable impact on students and faculty alike.

“Questions of drone strikes, targeted killings, voting rights, gun control and the role of race: these are things Holder talked about,” Politics and Government professor Seth Weinberger said. “Somebody of that importance, who actually impacts the country in such a large way, is certainly somebody who we are lucky to have on our campus.”

Seattle lawyer Mike Reiss facilitated the discussion, posing questions for Holder to answer. Towards the end of the event, the conversation was opened up to the audience, and students had the opportunity to ask Holder questions as well.

“What I enjoyed about Mr. Holder’s talk was the opportunity to hear from a public servant who was in the trenches every day and whose efforts actually bore fruit, or nearly did,” senior Alex McNeil said.

Holder fearlessly spoke about the legacy of racism, violence and minority oppression in the U.S., which inspired many students, staff and community members. The audience was clearly moved by Holder’s discussion and the stances he took on many controversial issues throughout his career.

“He encouraged us all in the room to engage with the world and to ask those tough questions, to find something meaningful for ourselves and to pursue it, and most of all, to participate in our politics, no matter how bleak the culture may be,” senior Alex Plant said.

The conversation touched on a wide variety of topics from Holder’s passion for criminal justice reform to his one-on-one basketball games with Barack Obama. However, the overarching theme of the talk was centered around making courageous decisions, both inside and outside of the political world.

Holder described the several times where he had to put his own personal opinions aside and do what was in the best interest of the country. For example, he admitted that although he is personally opposed to the death penalty, his job required him to consider it on several occasions.

“It’s not always about what you want or what you like; [Holder’s] job and the needs of the country called for actions beyond his own personal beliefs and I think that’s an important thing for students—and for everybody—to hear,” Weinberger said.

Holder wrapped up the conversation by saying that people on the extremes tend to be most vocal, while the middle pulls back from civil engagement. He explained how dangerous this is for the future of our nation, and finished his talk by encouraging every single person to stand up and fight for justice they believe in.

“Principled leadership entails having the moral courage to follow your principles even if it is not the easy road. That lesson is one that all of us can take and strive to pursue in our own lives,” Plant said. 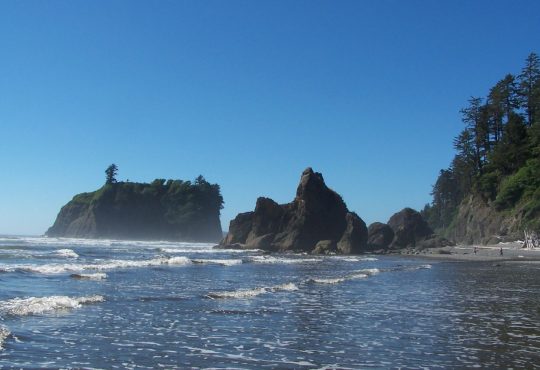