“I think what some people need to realize is that this protest is not solely a reaction to Mike Brown, it is a result of years of frustration and mistrust. Other than that I feel incredibly lucky and privileged to not have this issue permeate my daily life as it does for millions of other people. And coming from that position of privilege I think my only option is to not give personal opinions but to listen to the people actually experiencing the oppression.​”

“My gut reaction [to the decision] was one of disgust. It’s a gross miscarriage of justice on the part of the police department and the prosecuting attorney, especially because the attorney holds all the power to indict. Of the 162,000 cases in 2010, only 11 did not indict—so if the prosecution didn’t manage to do that, you know there was something else at play, and that is obviously race relations.”

“[The decision] caused a lot of reaction and unrest, which I don’t see as unhealthy but I also don’t see as productive. I think it generated a lot of headlines, but those headlines won’t create positive change—I’m in support of the Ferguson protesters, but when the cameras go away, people won’t be able to get as much face time. Stories like this require media attention, and once that’s gone, it will be hard to change things.”

I’ve engaged with discussions with students. I haven’t gone to any school-held discussions. From my personal perspective, I feel like not as much has really happened to affect campus, as has been seen at other schools such as [the] University of Washington or other bigger city schools—which is understandable, considering the size of the school. But I really just feel like there hasn’t been that much action or that many discussions taking place.

“I’m really impressed that Puget Sound students have already had various conversations regarding Ferguson… But I think that I’m very impressed with already the reactions from Puget Sound students, and how we really have started to talk about what’s going on and what that means for us as students—and as a part of the twenty-first century.”

“I think it was interesting timing with Thanksgiving break being right afterwards, giving people some independent time to reflect, and maybe go home and… talk to their families, or have a little bit more free time to watch the news… Now people can come back together after having that independent time and come back and talk. And there was already an event today [Tuesday, Dec. 2]… I’m sure there’ll be more in the future, because campus is very socially engaged.”

“I think that the way that people have been responding to it, in the streets and stuff, is the absolute wrong way to do it. I think a lot of the people that are just like causing all kinds of chaos aren’t really doing it because of Michael Brown. They’re doing it because a lot of people just use events as excuses to mess stuff up, you know? It happens all the time.  I don’t have a solution, but I’m sure we can think of a better way to get something done and handled. But yeah, I don’t think the way people are handling it right now—I mean, like the peaceful demonstrations—I still don’t think that’s the right way to handle it either. Like, standing around is kinda counterproductive. I get the point, but you know.  That’s what I think.”

“Well, personally, it’s affected me very deeply, very emotionally. Being a minority student and being an African American, I feel like I took it very personal, the decision of the court not to indict Darren Wilson… BSU also has been having a lot of discussions and talks about the entire thing, and also, they’ve also been keeping the students very well informed of other events that are happening in support of Ferguson. So I think it’s in the right direction… I feel like we could do more to be more active, and more aggressive with… speaking out against it. But I think it’s on the right path.”

“As a white student, I don’t think that there has been enough spoken about Ferguson on campus. I think that we could be more active and aggressive about it because, you know, I’m not a part of BSU, and so I haven’t heard anything about it after the events that happened. Like, my professors haven’t talked about it, you know… I did wear black on blackout day. I didn’t see many students doing that, it didn’t seem to be a campus-wide event, it just seemed to be some students on Facebook that arranged that… So I was pretty affected by it just talking to friends, and talking to people in my own age group, but as far as campus-wide events, I haven’t seen much happening.”

“I agree with them [Harrill and Cummiskey] about what’s been going on with the school. Yeah, #Blackout was good, but I saw nobody else doing it. I wore all black, and it made me sad when I went into my classes and saw almost no one also wearing black. And it actually affected me pretty deeply—the violence going on in Ferguson—because my sister actually got back from Missouri the day that the verdict came out. I was very concerned about her and her safety, and I’m going to Missouri over winter break. I think the verdict is horrible, and I think it’s horrible that the only way for people to really listen to it is for this violence to happen. If it was a silent protest, I don’t think as many people would know about it because, basically, a lot of negative attention… is being brought towards it, which is bad, but it’s also attention, so I kind of have mixed feelings about everything.”

“Honestly, being on campus, I’m stuck in the campus bubble. I haven’t watched a ton of news, but what I’ve heard, and my reaction to it is that there’s a ton of different stories going around, and honestly, I don’t want to comment or speculate, because I haven’t even chosen a side yet in what I think is right. Everybody seems in the wrong to me right here, because I mean, he committed a crime, but the dude shot him… But as far as the effect it’s had, I feel like people are being real ignorant about it. They want someone to be wrong, like they’re trying to make the cop seem worse, or they’re trying to make the kid seem worse… I think that’s the bad part about it, is, it’s not even a median—it’s just either you’re one way or the other.”

“I was surprised given the demographic of UPS and then, going home, the demographic of Southern California—they’re not too distant. And I was impressed by the conversations that were happening on the UPS campus… my friends and family back home, [Ferguson] was not even on their radar.”

“I personally haven’t heard much of the Ferguson talk on campus. I watched a little bit on the news, and that’s kind of where I got my information, but I haven’t really head people discuss it on campus, because it is kind of a tense subject… I kind of agree. It was definitely really shocking, so I’m not sure of my standpoint, because there has been so many different stories about it. So it’s kind of hard to tell what actually did happen, but I do think it had to do with race.”

“I thought on Monday we were going to have, a blackout event, where people wear black. I think we had a discussion today on that, so I think there have been measures taken that I’ve heard of. I don’t think attention has NOT been paid to it and I think personally it’s kind of unreasonable, and ridiculous, that the officer was acquitted of the crime, because someone did that. Someone should be held responsible. And I think race does play a large part in it, and maybe that wouldn’t have happened had, you know, this not been a race issue. It isn’t even really surprising, though, which is really sad. Because it’s the same stuff happens all the time. And I think it’s shocking that it’s not surprising, I guess, is the best way to describe it.”

“My opinion is that I don’t factually know enough to actually make an educated guess about this. I’ve heard both sides, though I feel that there are a lot of people who don’t know the facts, or who are just screaming ‘It was a black person shot by a white person,’ honestly. But it could very well be that he should’ve been shot. I mean, I don’t think that he should’ve been shot in the first place, but I feel like I don’t have enough facts to really know if people are just shouting opinions back and forth. Which is kinda like [sic] what always happens with kinda like, you know, with stuff like this. Just mass stuff.”

“Honestly, I think at the beginning, the protest was definitely justified and was necessary. ‘Cause, I mean, we didn’t know what happened at the beginning when the news was—when there was news about Michael Brown being shot. I think it got blown out of proportion because it’s not just because there was looting and rioting that happened, but other people from not just Ferguson but from across the U.S. started showing up just to protest about just personally their lot in life.”

“Lord knows if Darren Wilson shot a white guy, he’d be in jail right now…We need to hold cops accountable for their actions. This is an issue of systemic racism…It’s nice that the rest of America has woken up from the dream of post-race and can now see the true horrors and the reality of how things are in this country.” 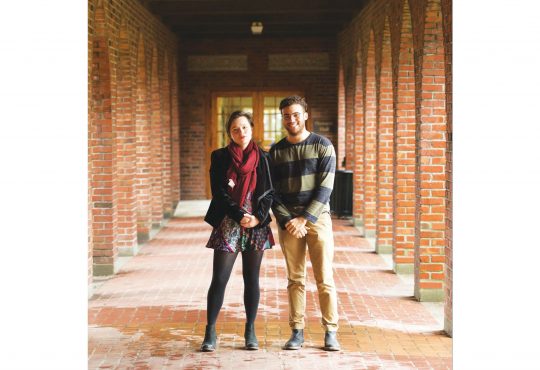