The Trail
HomeOpinionsLetter to the editor: a defense of “Philosophy Department is Antiqueer”
Opinions

Letter to the editor: a defense of “Philosophy Department is Antiqueer”

In response to the recent article concerning the anti-queer nature of the Philosophy Department, I hope here to provide a brief defense of the issue in an anticipation of the argument against the author. There are three primary replies that could be given in defense of the department, all of which have their merits and faults: 1) the queer individual that was silenced was only silenced in an attempt to allow other students to speak; 2) the department has already taken measures to correct for the exclusion of queer individuals through the offering of courses like Gender and Philosophy; and 3) this is not an issue that is solely found in this particular department, but is rather a problem the university faces at large.

The first argument address a rather popular objection against racism/sexism/sexualism/genderism in the educational system.

The objection goes a little something like, “No, I wasn’t being discriminatory towards that non-white, non-male, non-cis gendered, non-straight student! It was simply the case that they speak too frequently in class, and I would like to give other students the opportunity to talk!” What this objection fails to take into account however is the different circumstances by which certain individuals are afforded more possibilities to speak than others.

As the white, passing cis-gender male individual who was called upon once the author (CJ) had been silenced in their class, I can tell you there is a rather critical distinction between the silencing of a queer individual and the “silencing” (if such a word is not too strong in this case) of individuals like myself.

I too have been told to stop speaking and have been belittled by my peers in similar courses (and by the same professor), but the context in which this occurs is radically different.

Regardless of my position as a non-gendered individual, I am privileged in a way that others are not, due to the passing nature of my outwardly masculine appearance. There are no doubts in my mind that I have every possibility to comment on something in class and assert my opinion- but queer individuals often do not have the same security. “Stop talking” is not something queer individuals are all too unfamiliar with hearing; that is, of course, if they are even allowed to speak at all.

What is required here is for both students and professors alike to recognize that the classroom is not free from the influence of a long history of the oppression of women, non-white individuals, queer and transgender individuals, non-heterosexuals, and a long list of other identities that have been and are actively being erased.  As a colleague once told me, if a professor has to silence some individuals to make room for others, perhaps they should address why some students feel as though what they have to say is not worth saying in the first place.

It might be true that each department has made what could be considered “progress” in discussing these problems. More classes than ever before are being offered to explore issues in gender and sexuality. Students can choose from over 30 classes from 16 departments that deal with the intersections of gender and race, religion, economics, literature, philosophy, psychology, politics, science, and media, as well as the depictions of gender in Ancient Greece and Rome, Colonial America, Colonial Africa, and modern Latin America. In addition, a student can choose to pursue their degree in Gender and Queer Studies (formally Gender Studies) and graduate with a hopefully enriched interdisciplinary understanding these issues.

However, the fact that these courses are offered in opposing relation to every other course in our curriculum tells us something about the nature of the way issues of gender and sexuality are discussed on campus. While professors are doing a better job at incorporating conversations about gender into their lectures, there still remains the issue of distilling the queer conversation out from the “pure” science or theory.

Perhaps the greatest saving grace for any liberal-arts-centric course of study is its ability to be self-critical. However, relegating debate over the anti-queer nature of philosophy, science, or politics to spaces explicitly created to discuss the limitations of the method fall into the same trap of making queer individuals a footnote to the grand philosophical/educational project. “There is no need to discuss gender in this class” says the narrow-minded professor, “if you want to learn more, go take Gender and Philosophy”.

It is perhaps the final argument that has the most weight in this discussion. It is not just the Philosophy Department that suffers from an implicit participation in the anti-queer agenda, but every other academic and administrative department on campus as well.

This is not meant to be solely a condemnation of those individuals who work the hardest to provide us with an education such that I might have the ability to even write this article. In fact we have often seen what such a straight-forward critique will do, and before we realize it, everyone will be shouting at each other to defend themselves from what they believe is a personal attack on their character. No, what is required here is a serious recognition of the problems of gender and sexuality we face here on campus, problems which we share with every single learning institution in this country. We can no longer afford to object to the very idea of discussing sexual violence on campus, or to the idea of having Gender-Neutral Restrooms, or a core requirement designed to bring attention to the relationship between power and race, sexuality, and gender.

We must do our best to remain in the discomfort. Queer individuals are being severely hurt by our refusal to admit responsibility.

But don’t take my word for it, go read last week’s Trail. 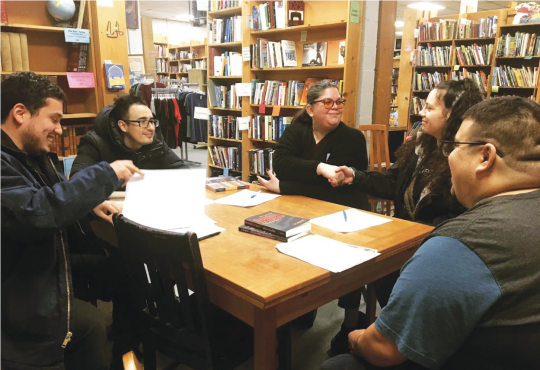