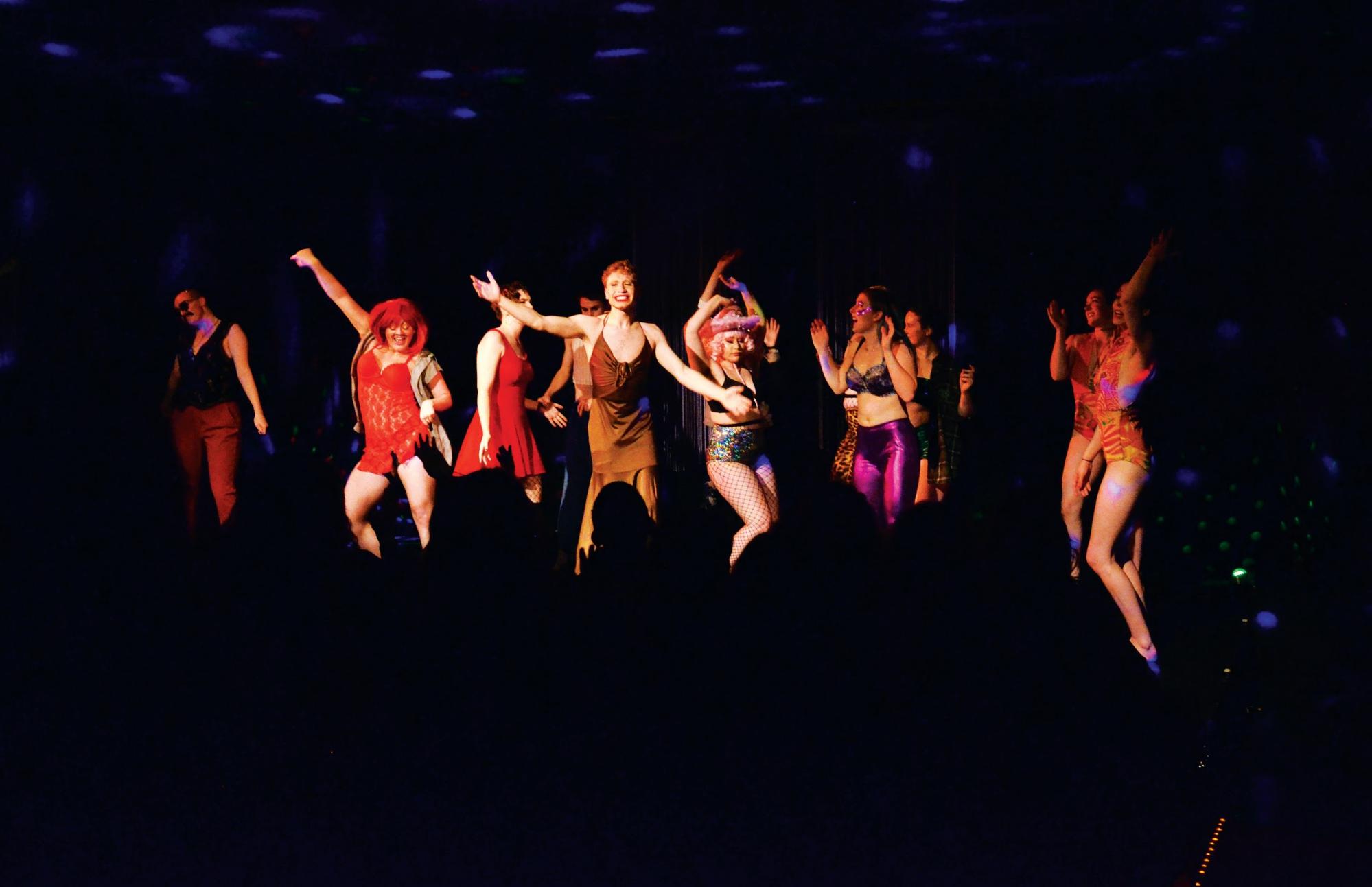 Last Friday, a near-capacity audience in Rausch Auditorium attended the opening of The Disco Dazzle Drag Show, hosted by the DRAG club. The show was briefly introduced by club president Josh Weintraub (performing under the name Maiden Uranus), who asked for continued respect from the audience, detailed the bravery it takes to perform in such a setting, and framed the show as a way to have a good time while challenging gender norms.

The show commenced with no shortage of disco lighting, glitter and on-theme costumes, positively received throughout by an incredibly energetic audience.

The majority of pieces were solo dance performances, where performers strutted and danced around stage, mouthing lyrics to well-known disco songs. However, the show also provided variety with an audience participation lip-synching competition, a raunchily taught sex education class and an impressive acro-yoga display.

The show featured approximately 10 separate performances and timed out at just under an hour. Pieces were woven together by Master of Ceremonies Erin Lungwitz, who provided comedic introductions and commentary on each performance.

Yoshi Sakai, a sophomore Religious Studies major, showed up knowing very little about drag but found the show to be “a great way to challenge gender and to get people more excited about how great it is to be yourself.”

Weintraub, a junior studying Psychology, founded DRAG club in fall 2018 and has operated as president ever since.

“I wanted the club to be centered around gender expression, include conversations about gender identity and expression and how they function in today’s society, and apply that to drag, as a culture, phenomena and performance art,” Weintraub said.

The club meets every Thursday and aims to be as accessible as possible by not requiring any club dues. They have been preparing for the Disco Dazzle show since the first week of this semester.

Asha Berkes, a sophomore studying English with a Creative Writing emphasis, has been attending meetings since the fall.

“Drag has always been an avenue for me to learn about and express my queer identity and I am so excited to perform in my first drag show!” Berkes said.

For Berkes, preparation has meant hours on the elliptical, unprecedented creative freedom and a lot of fun. Berkes cites the documentary “Paris is Burning,” RuPaul’s Drag Race and experimenting with makeup and fashion as important influences for deepening her interest in drag and ball culture.

“I want DRAG club to be a safe and fun club for queer people to exist and celebrate our beautiful selves and our history,” Berkes said.

“It took a lot of work to get people to actually be interested at first, but once we had the show last semester everybody was like, ‘Whoa, that was cool,’ so now everybody’s doing it this semester,” Nosek said.

Nosek noted that the club has benefited recently from better organization and attendance. Now, a dozen or so members consistently attend weekly meetings to practice, discuss the history of drag or hand-craft, sew and bedazzle costumes and props.

According to an article from The Nope Book, an online feminist lifestyle magazine, the art of drag “has been around since the first time people started dressing up and performing for entertainment.” The term itself was coined by Shakespeare to describe the “common act of cross-dressing in theatre in a time before women were allowed to perform on stage.”

Drag has since evolved to become a significant aspect of entertainment in the LGBTQ+ community and is also closely associated with the United States gay liberation movement and the Stonewall Riots. While the definition of drag is still debated by contemporary performers, it is at once an art form, entertainment and an act of self-expression.

Nosek, who identifies as non-binary, recognizes drag queens and kings as a crucial and under-recognized part of the queer revolution and LGBTQ+ history more generally. DRAG club has allowed Nosek access to something historically important to the LGBTQ+ community.

“I’ve always been interested in dressing differently and experimenting with my gender presentation,” Nosek said.

Weintraub recalled encountering drag on Youtube, while putting together a photo project about gender expression and the strict rules that apply to men’s ability to express femininity. Discovering people who were also queer and wanted to play with gender expression in both entertaining and challenging ways came as exciting during a particularly lonely time in high school.

In addition to their roles as club leaders, Nosek and Weintraub both choreographed and performed their own pieces, as well as in a show-opening officer dance and all-cast closing number.

Despite drag’s liberatory history, both Nosek and Berkes acknowledged drag culture’s historical and ongoing enforcement of gender roles and gender binaries. Through deconstruction and inclusion, DRAG Club “works really hard to allow everybody to come in so it’s not only boys dressing up as girls and girls dressing up as boys,” Nosek said.

This mission entails connecting with LGBTQ+ organizations in Tacoma, putting on fundraising shows where proceeds benefit these organizations, and raising funds and awareness for overlapping causes.

“We can give back and create connections with the Tacoma community, because that’s something that UPS should be doing anyway,” Weintraub said.