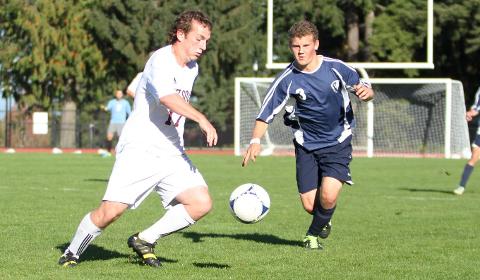 The men’s and women’s soccer teams both had very different experiences at their games on Oct. 26.

The men’s team took on the Willamette Bearcats at home in a close game that resulted in a 1-0 loss for the Loggers.

The men previously lost to Willamette 2-1 on Sept. 27, and the Bearcats made it clear throughout this game that they were going to stop the Loggers at all costs.

They received five yellow cards and 23 fouls during the game while the Loggers only came out with six fouls.

Senior Andrew White (Steamboat Springs, Colo.) knew the game against Willamette would be a physical one.

“We fought hard and knew it was going to be a one or two goal game and, unfortunately, didn’t have the mental toughness to capitalize on the opportunities we made,” White said.

Total, the Loggers took five, and the Bearcats took six.

Willamette’s only goal was scored off a header from a corner kick 32 minutes into the first half by Yazan Hishmeh.

White is determined not to get hung up on this loss and is looking toward the next game.

“Hard work is the best way to bounce back after a loss,” White said. “It’s important to not get hung up on mistakes or what could have happened. Instead, I focus on moving forward and the week of practice and the upcoming games.”

“Our goal going into the game was to pass the ball quickly and accurately, and to use our possession to get into the attack and score,” senior Annie Jonsson (Portland, Ore.) said.

“We felt that we achieved this goal and played one of our best possession games of the season along with using our skills to attack and score four goals throughout the game,” Jonsson said.

The night before the game against George Fox, the Loggers watched film from last year’s second round national tournament game against Hardin-Simmons.

“By watching the film, we were able to see our potential and what we are capable of as a team,” sophomore goalkeeper Lauren Thomas (Woodinville, Wash.) said.

“After watching that, there was an energy among the team that is difficult to explain, but every member of the team brought a level of excitement and determination that was raised to a level I have had yet to see this season.”

Neither the Bruins nor the Loggers scored during the first half, but the Loggers came back determined for the second half.

Prickett shot the ball from outside the box, and it hit the net right above the head of Bruin goalkeeper Ally Swanson.

This was Prickett’s second goal of the season.

Assisted by junior Liz Blonden (Seattle, Wash.), Anderson received the pass from across the box and shot. This was Anderson’s first goal of the season.

“I was really happy about my assist and being able to contribute to our win against George Fox,” Jonsson said.

“As a team, we agree to put everything we have into the game the full 90 minutes, so assisting a goal later in the game was a great reward for the effort myself and the rest of the team gave throughout the whole game.”

After a successful weekend consisting of two back-to-back wins, the women spent the beginning of the week recovering so as to be fresh for their next game.

“It has been a quick turnaround from this weekend’s game,” Thomas said. “So really we are all doing our best to recover quickly.”

The Loggers’ winning streak came to an end, though, with a loss to the Pacific Lutheran Lutes on Oct. 29.

No scoring occurred within the first half of the game, but the Lutes came out strong with two goals right off the bat in the second half.

The Loggers attempted a comeback with a goal scored shortly after by Vieira, but the game ended after a third goal by the Lutes, bringing the final score to 3-1. During the game, Puget Sound received two yellow cards and one red card while the Lutes received one yellow card.

With three games remaining in the regular season for the women and men, both teams are focusing on their individual strengths as well as their team chemistry.

“We, as a team, not only invest in the physical side of the game but also the mental,” Thomas said. “Meaning that we realize that soccer can be very mental on and off the pitch regarding playing and getting feedback from fellow teammates and coaches as well as how we learn to compete.”

White said that practice will be geared toward maintaining the team’s level of confidence.

“We drill into our heads that the season is nowhere near over and that anything can happen in the Northwest Conference,” White said. “For the rest of the season I just want to finish off strong and maintain the high level of play we have been playing all year.”.