Under the alias “Grouper,” musician and artist Liz Harris has been making eerie and mysterious solo records since 2005. Last Friday saw the release of Grouper’s newest album, Ruins, a tender and sprawling masterpiece dedicated to the past that successfully encapsulates the memories and history of memory and history themselves.

But, over time, Harris has maintained a trend of gradually unveiling the swirling and foggy compositions Grouper became known for in its early career. After setting a standard of delicate yet indecipherable, crafting music as intangible as air, Grouper has been stepping back the layers of concealment—and Harris herself stepping forwards, inches at a time.

In this respect, Ruins is quite likely Liz Harris’ most stripped-down effort, and by a much larger margin than ever when compared to her other recent work. Her audio palette is restricted, not only by virtue of the few objects used to make sounds (a piano, her voice and whatever else was around, including croaking frogs, creaking wood and a thunderstorm) but also by the circumstances under which those few sounds were recorded— circumstances which themselves became solidified as Ruins.

These limitations unify every track on the record, as if the songs are huddling together to compensate for their sparseness, but they also peel away some of the mystery that would have normally masked the songs’ actual forms. Grouper still sounds ghostly, but never before has she sounded so recently deceased. If there is a ghost in these ruins, it’s one that can still recall its life on earth.

Ruins reads as a memory, constantly calling back across a vast space to a past which feels worlds away. It was almost entirely recorded on a four-track tape recorder during an artist residency in Portugal in 2011, and doubles as a document of that time; even three years later, its surroundings were not erased. Reality bleeds into the hazily infinite network of memory and imagination—small windows into the obtrusive outer world that knows nothing of such complex internal landscapes, such as an unsolicited microwave beep. This wispy weaving of real-life sounds with traditional music ones makes this album come across as a vignette, like a sneak preview of your next life.

At times, the image is even somewhat concrete, like a shaky black-and-white film video of a trip to the beach in the 1900s, except more somber. On Ruins, there is a constant nostalgia that reaches back much farther than its literal history, an irresolvable tension rooted in time and distance immemorial.

Liz Harris still displays a masterful use of reverb, but gone are the perpetually thick sheets of it; gone is the hauntingly incorporeal mass that usually threatens to swallow her songs as well as itself. Instead, the reverb trails behind the music like a wandering ghost, seductively embellishing the minor evidence of life that its companion betrays to the world, discovered at the crime scene of spare breaths and the wordless movement of lips near a microphone.

This pair is joined by its scapegoat, language, confident in its longing: “I hear you calling and I want to go, run straight into the valleys of your arms and disappear there.” (Track: “Holding.”)

When it first pops out of the fog of the prelude track “Made of Metal,” Ruins opens quickly, almost impatient to begin, but it just as quickly catches its breath. As this cycle repeats, the push-pull rhythm becomes an oscillating heartbeat, charting a pulse that responds to events we can’t see. Ruins is one half of a revelation, the unfolding of a scroll that has no end.

Ruins’ pensive dénouement “Holding” strolls carefully through a handful of notes as Liz Harris paints with several layers of harmonies an ethereal garden with the unknowable color of smoke, speaking through a trance about her own enchantment, “the beauty of their failures.” Whose failures? It’s hard to make out all the words, but someone was “drawing pictures in the blood that runs up valleys.”

As the song unfolds, I can’t tell whether I wish I could hear everything she’s saying or if it’s better off to just be engulfed by the sound and the sentiment, but by the end, I think I would opt for clarity.

This is music that periodically disappears, but almost always promises to return again. Bookended by songs called “Made of Metal” and “Made of Air,” Liz Harris attempts on Ruins to split the difference between not just solid and transparent, but also between present and absent—between dimly forgotten and suddenly arresting, patiently relentless. Ruins lets you float away only long enough to recover from its moments of undeniable groundedness, the skeletal and lyrical tracks like the estranged love letter “Call Across Rooms,” which threaten to tear apart (or at least tear up) those who listen to them too lucidly.

Ruins is in turns indifferent and demanding, but after repeated listens, it all becomes utterly captivating, hypnotic and irresistible. As loose syllables escape from Harris’ echoing whispers to spiral off into the shadows, the naked details become faint landmarks through which you come to know yourself only as a stranger. When you finally do feel safe enough to decipher the words, which surface as fragments alienated from their own history, their honesty is as unforgiving as it is confessional:

“What has been done can never be undone, so take your sad song and send it to (save it for?) the next life… maybe you were right when you said I’ve never been in love…”

The album ends with an even older track than the ones written in Portugal, a tired echoey vortex set to the backdrop of a thunderstorm that actually predates Grouper’s first release (the latter occurring in 2005; the former recorded in 2004). This 11-minute fade-out, one more layer further removed, itself becomes a kind of ruin, a monument to a different past from the one that is remembered in the first 30 minutes of Ruins.

To move so far forwards and then snap immediately back makes “Made of Air” an ambiguous ending, a final smoky magic trick that conceals all future plans Grouper may hold for itself. But in any case, as Ruins is washed from its own memory in these last moments, one thing is clear: Liz Harris as Grouper, after nearly 10 years of never missing whatever she decided to aim at, continues to make thoughtful and delicate music for hearts and the open spaces they occupy, whether she is legible as a human or dissolves into the ether before you can say “thanks.” 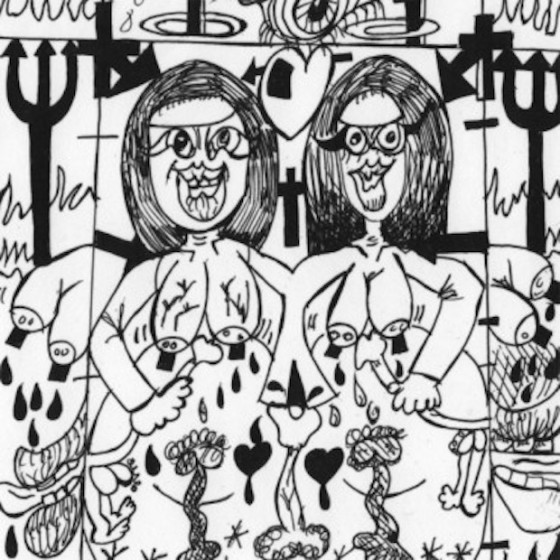