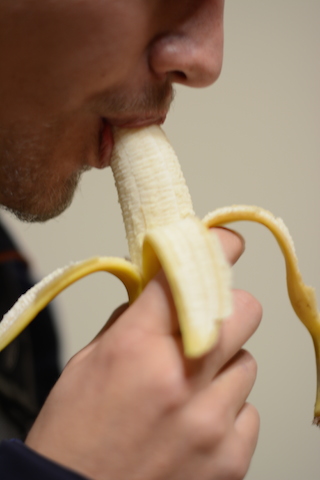 This is bananas: Some foods just aren’t OK for women to eat publicly.

A new policy has recently been proposed by the University of Puget Sound administration in order to prevent female students from publicly consuming phallic-shaped foods.

The policy arose from both faculty and student concerns that the way in which most female students eat bananas, popsicles, and other similarly shaped foods, are overtly suggestive and distract from the high level of academia the University seeks to uphold.

Indeed, many students felt that the suggestive manner in which female students masticated these foods proved distracting both in and out of classroom environments.

“The way Nancy [last name omitted] ate her Otter Pop in my Spanish class the other day…,” sophomore Jake Randall said. “Let’s just say I kept my book in my lap the entire period.”

“I was in the S.U.B. yesterday and saw this beautiful blonde girl from my calculus class eating a Tootsie pop,” Harding said. “It was just so… sensuous. I couldn’t keep track of where I was going and tripped. I dropped my cup, and it just kept bouncing… and bouncing…”

Randall and Harding were not the only students affected by their female counterparts’ actions as more students spoke up in agreement with the proposed policy.

“I find it absurd that girls could even get upset about this issue,” senior Alex Goodall said. “It shouldn’t be our responsibility to not look at them in class. I mean, look at the way they hold bananas or take the wrapping off popsicles­—I think it’s about time someone did something to change this. It’s not appropriate for the public sphere just because it’s so-called ‘natural behavior’.”

Moreover, the policy looks to improve the quality of life and return community focus to round-the-clock engagement in academic work.

“[If the policy goes into effect,] self-identified female students will no longer be able to use their dining dollars to purchase particular food products,” Denison said.

“We are also looking to remove all straws from the dining area—this way, we can prevent the further distraction of students in addition to adhering to our school mission to live green,” Denison said.

While this potential policy looked to better students’ on-campus experiences, many students expressed opposition to the new system.

“How am I supposed to hold a banana? Honestly, the way we do it is the most efficient and effective way. You try it!” sophomore Kelsey Jameson said.

However, in a series of studies commissioned by the school, researchers found that holding a banana in the classic closed-fist grip was not the most effective way to eat the soft, fleshy fruit.

Although skeptical students have requested further research with a different company, Denison denied the request due to “budget cuts.”

“It is not about accommodation, it is about respect,” Denison said in a final statement. “Our mission here at the University is to create a safe and accepting place for all students and faculty. If members of our community are not making this possible, we have to adjust our policies.”

While the opinions of most female and male students are clear-cut on the proposed rule, the LGBT

community has yet to release a statement regarding their opinion on the matter.

The potential new policy is sought to be included in the school handbook and conduct code beginning the spring semester of 2015.