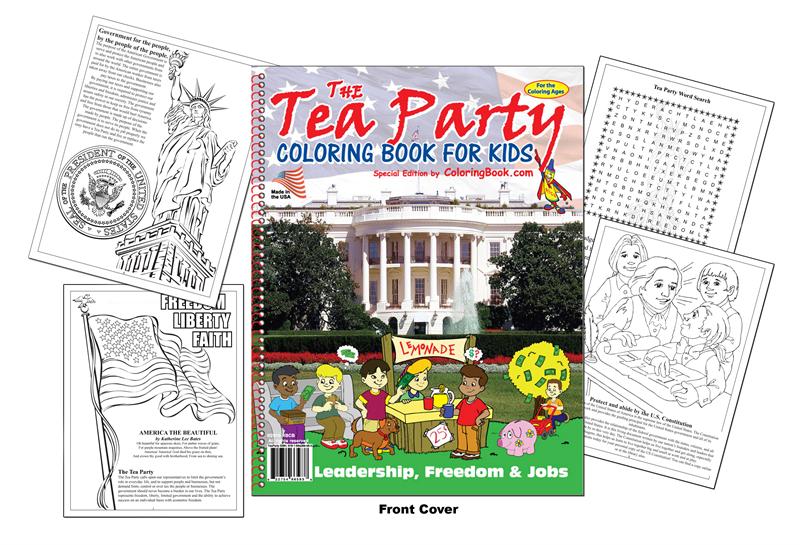 Since the relatively recent emergence of the Tea Party political movement, it has increasingly captured the political spotlight with its far-right views and funny hats.

They believe in lower taxes (especially for the rich), small government and strict adherence to the Constitution. While these may seem like your standard, run-of-the mill fiscal and social conservative views, the Tea Party generally takes them to the extreme.

The latest in a growing list of Tea Party shenanigans is the release of a children’s coloring book that espouses the skewed ideals of the party.

Though released by Really Big Coloring Books, Inc. (a non-Tea Party affiliated organization), the book is endorsed by Tea Baggers as well as many Fox News contributors.

The book itself, though ridiculous, does not seem to pose any threats to American society. However, it represents troubling political hypocrisy, as well as the dangerous influence of the Tea Party itself on American politics.

Since taking office in January 2009, President Obama and the Democrats have been accused by Republicans of indoctrinating children with liberal political views. This perceived indoctrination has been highlighted to American students everywhere from a speech made by Obama to a song about the president sung by some children in New Jersey.

But if the president addressing school children about the importance of education is indoctrination, isn’t the “Tea Party Coloring Book for Children” essentially the same thing?

If the president of the United States wants to talk to kids it is a horrible misuse of power, but if someone wants to distribute a book —filled with factually incorrect information, I might add — to American kids, every thing is just hunky-dory. Does anyone else see the hypocrisy?

Some conservatives have said that this coloring book is just a way to fight back. But how is that better? They are still trying to teach impressionable children to believe what they believe.

One major issue with this coloring book is that it contains information that is factually questionable, and it praises the Tea Party, whose name and ideology are based on a skewed view of history.

Actually, the Boston Tea Party led to higher taxes, in order to pay for all the tea that was dumped, as well as martial rule in the colonies. It did not lead to lower taxes or freedom.

Plus, the Boston Tea Party was protesting a tax on actual tea, as well as taxation without representation, not just taxes in general. The colonists were fighting against actual tyranny, as opposed to fighting to keep money away from important social programs. It also claims that high taxes “take away jobs and freedom.”

It is overly simplistic to correlate tax rates with unemployment, since there are many factors that can affect unemployment rates.

If the Tea Party wants to educate children with their twisted view of history in order to create a generation of misinformed voters, you would think they could come up with a more effective way of accomplishing their goal.

Most kids will not even be able to read it, and those who can will not understand most of what is printed in the coloring book anyway. They will probably scribble it out in purple crayon and be done with it. Kids will learn nothing more than how to color inside the lines, if that, because the picture outlines are not particularly fantastic either.

The coloring book is more for disillusioned Tea Baggers to attempt to pass on their unrealistic anti-government ideals to their children. Even though I tend to disagree with Tea Party politics, I think it has the right to air its views as long as it is in an appropriate forum.

This is hypocrisy at its finest. If the Tea Party would come clean about its true intentions, then I say it can go ahead and make all the absurd coloring books it wants. Hopefully parents will see the absurdity.