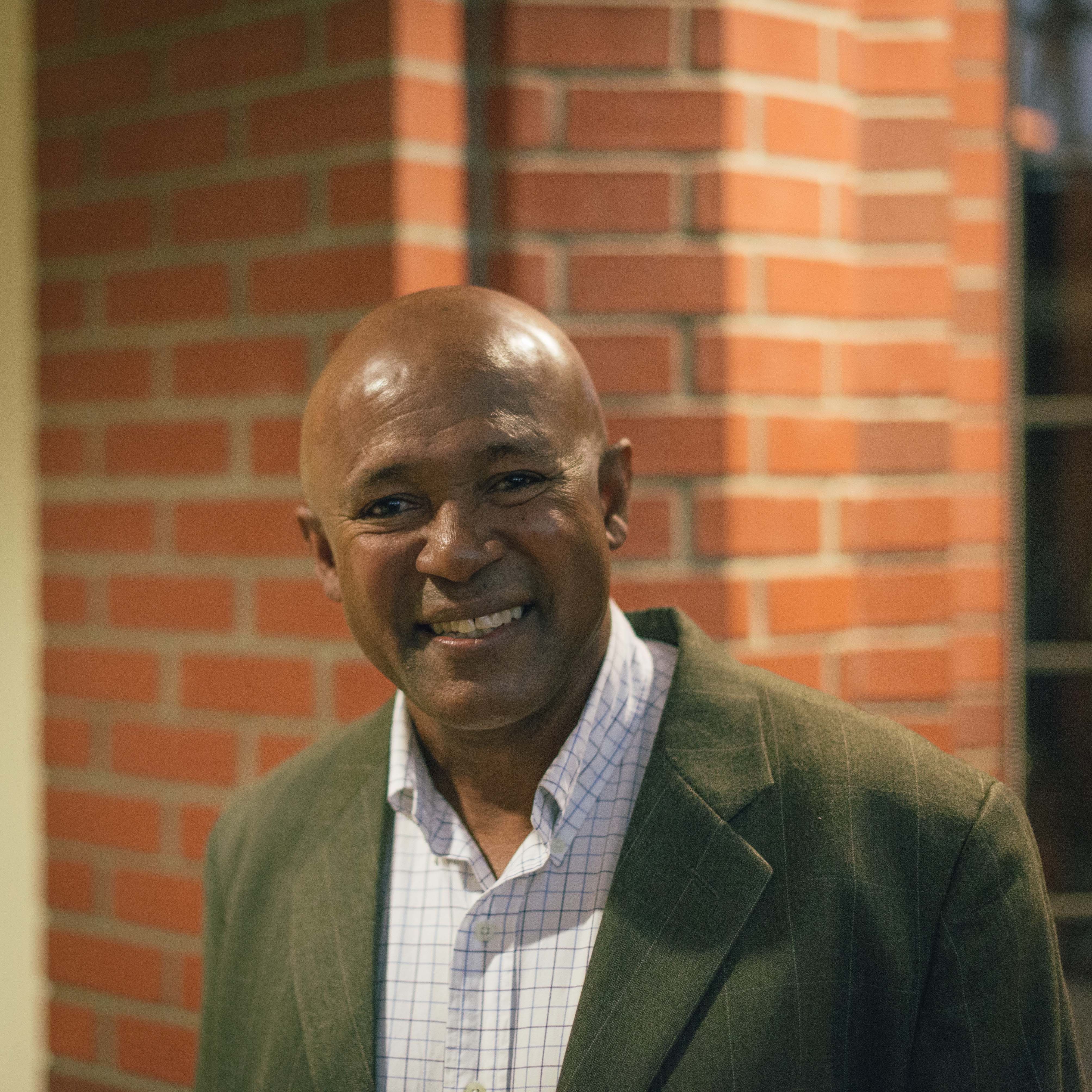 At the time the talk was slated to begin, the crowd was sparse and it did not look promising. However, the crowd slowly trickled in and about 15 minutes after the original start time, the audience was full and the poet was ready to begin.

He began his talk by apologizing for the wait and for starting late. Then he spoke about how he liked to use the river as a metaphor in his poetry and used other old and understood metaphors, such as the caged bird singing and listening to the silence. As he spoke in his elegant Jamaican accent, many students took notes.

He explained that the poem he’d begin his talk with was about peace. The poem itself was, indeed, deceptively simple. Simple wording and easily understood, but with immense depth and meaning behind it, leading the listener or reader to think about more than the surface meaning of his words.

After his first poem, he thanked Professor Dexter Gordon and the others who worked for almost a year to get him to the University.

“I am really grateful and honored,” he said.

“A book titled Dead Portraits in the Living Room is more about the living than the dead,” Wilson said. He explained how the dead live on in our memories and as spirits and do not need to be portraits in the living room, because they will never be forgotten.

He continued on, explaining that the point of his book was to say “hey, look at me, see how handsome I am; let me look at you, you’re so very handsome.” Wilson explained how he wanted his book to cause us to stop forgetting ourselves and one another.

He then read the namesake poem of his book Dead Portraits in the Living Room.

After reading the poem, Wilson went on to quote the dictionary definitions of culture and unity. His voice was very soothing and calm, very much the voice of a poet.

He spoke about how unity should be found within diversity and that you must love yourself before you can love another.

At that point, a segment of Bob Marley’s “One Love” played.

It takes “10 or 100 lives to really appreciate all the cultures of the world,” he said. Still, as he spoke, students took notes dutifully, entranced by his words but also appreciating them as academics.

After an interlude where he read another poem from his recent book, Wilson quoted Wikipedia and listed what the Caribbean consists of. He then spoke of the history of Central America and the Caribbean, including the Mayans and the Aztecs. He then spoke of when the Europeans came and “history began, as it’s said.”

Although he spent a lot of time during his talk quoting other people and playing musical segments to illustrate his points, the effect of his voice and words was not lost. He was thoughtful and interesting.

Although there were points when he made some remarks about how men should lead the community and provide for the household—not the women—his thoughtful poetry and points interested those who attended the event greatly.

As he ended his talk, he explained why he loves America and all Americans so much. He said the underlying reason was his mother, who  came here in the early 1970s for three years. Afterwards, everything she did, she did as an American. Through his “mother’s vivid descriptions, [he] fell in love with America.” He then instructed us to stand and applaud his mother.

“Ron will take you to the heights,” Wilson said. “The world is a small village,” he concluded. His talk ended and the whole audience immediately stood up and applauded him and his poetry.

Dead Portraits in the Living Room is a book of poetry exploring cultural unity in the Caribbean and Central America, remembering ourselves and others, and loving each other and our passed relatives.

Gregory Wilson will be releasing another book of poetry soon. Bound to be as interesting as his first, it is likely to be highly recommended.