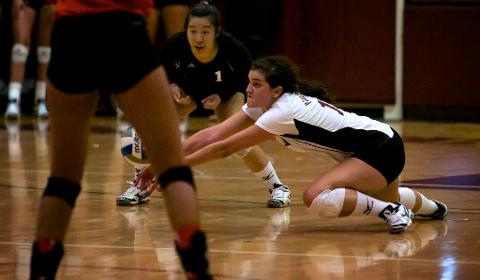 This has been a successful and powerful season for the women’s volleyball team.

With a record of 17-8 for the season and 12-4 in the Northwest Conference matches, the University of Puget Sound women’s volleyball team has had a tremendous season.

Currently the Loggers are in second place for the NWC standings behind Pacific Lutheran, who is 14-1 in the conference.

On Friday Nov. 8, the Loggers played at Willamette in Salem, Ore., where the final score of the game was 0-3.

The Loggers have had a dominating season, winning more than half of their games as well as having many standout players.

Many of the volleyball games have brought out a large amount of fans and spirit from fellow Loggers, and the games have been very energetic and spirited.

As seen by the results, the Loggers progressed and had a much better game towards the end. Their points continuously increased each round.

Game one started with a kill by Carly Hargrave, giving the lead to Willamette with a score of 0-1. The second point was a kill by Sarah Fincher, adding another point for Willamette. The first point for Puget Sound was a kill by Nicolette Reynaud (Los Gatos, Calif.), making the score 1-2.

The first game was not favorable for Puget Sound. Willamette had scored 12 points before the Loggers made their second point with a kill by Danielle Westerman (San Francisco, Calif.).

At one time in the game, there were points bouncing back and forth between the teams, with Puget Sound scoring, then Willamette and so on.

Game one ended with a kill by Lindsey Compton, giving the lead to Willamette with a score of 12-25 in the first round, and an overall score of 0-1. Throughout the game there were not that many attacks or other errors by either team.

Hargrave started off the second game with another point for Willamette. Willamette had four points in this round before Puget Sound scored their first point from Emily Convery (Portland, Ore.). The next point was also from Puget Sound with a kill by Kristen Lane (Seattle, Wash.). Both of these points were from Jenni Brehove (Vista, Calif.)

Throughout game two, Willamette had a solid lead, giving theLoggers few opportunities to come back.

The last three points of the game went to Willamette, with an attack error by Jordan Bird (Richland, Wash.), a kill by Fincher and finally a service ace by Lindsey Compton. Game two ended with a score of 15-25.

The third game was the best round for the Loggers, with the closest score. Willamette’s Fincher started off the round with a kill, then Puget Sound’s Convery scored, bringing the teams to a tie.

Throughout the game, the Loggers were not far behind Willamette and were continuously scoring.

Willamette took the major lead when they scored four points one after another, making the score 15-21.

The ending was close; Willamette was at 24 points, but the Loggers kept fighting and scored three consecutive points. Game three ended with a service error giving Willamette the point with a score of 20-25.

The Loggers’ last game was on Saturday, Nov. 9, when they played at Pacific in Oregon. The final result of the game was 2-3, which concluded the team’s season.

Pacific is right behind Willamette in the NWC rankings in sixth place. They have a conference score of 7-9 and an overall score of 8-15.

The women’s volleyball team this 2013 season has been very successful.

Unfortunately, because the Loggers lost this game, they are eliminated from the chance to win a NWC title.