While the University of Puget Sound offers traditional college sports such as football, soccer, basketball and more, they also highly support unique sports such as women’s and men’s crew.

Rowing is a very intricate sport with a variety of line-ups of a boat along with specific positions and techniques. A setup of a boat includes the coxswain and a number of rowers depending on the size of the boat or shell that the team races.

At Puget Sound, the varsity men’s team races in three kinds of shells; 8+, the 4+ and the 2-. The plus means the boat includes the coxswain and the number is the number of rowers in a boat. The rowers sit with their back towards the bow, which is the tip of the boat that is led in the moving direction, and because of this, the coxswain is the only member that knows where the boat is going.

In an 8+ boat, there are four rowers on starboard and four on port. Each rower has one oar and follows the person in front of them. The 4+ boat has bow-loading fours, which has four rowers and a coxswain who sits in the bow of the boat. The rower placed at the stern is called the stroke seat and he sets the pace of each rower. It is important for each partner to know the other rower’s pace because the strokes have a very specific pattern.

The role of a coxswain to a crew team is very crucial and significant. Because coxswains are not contributing to the physical aspect of rowing during a race, they tend to be smaller and lighter in weight. One of the three coxswains for the Puget Sound men’s varsity team, senior Delany Pelz, exemplifies what it means to be a key part of the team.

“Being on any varsity team requires commitment, trust and respect. Regardless of the role you play or the position you hold you need to be there as a teammate for your team. As far as being a woman on a men’s team? It is definitely a different dynamic. There is no way around the fact that I’m female and identify as such, but we don’t really focus on it,” Pelz said.

“It isn’t a big deal. When we’re at practice or hanging out I’m just another teammate. I do the land workouts and lifts with the guys. On the water they trust me to be the coxswain and perform to the best of my abilities; pretty much what you’d expect of any teammate,” Pelz said.

A typical morning for the Loggers includes waking up and being ready by 5 a.m., driving over to American Lake in Lakewood, then setting up to go out on the water by grabbing the cox box, oars and boats.

Before they start in the water, the rowers have land warm-ups, then proceed to water warm-ups and drills. Rowing practices focus on a variety of techniques.

“This usually involves pieces meant to build up the speed and stamina of the boat in a way that would translate well to racing situations,” Pelz said. “Often this means working very hard at certain rates so that we have a good base when we want to bump up the stroke rate during the race.”

Pelz had no past experience with crew before walking on to the Puget Sound team her sophomore year after hearing about it from fellow students.

Although she was fairly new to the sport, she took on a major role which requires trust from every other member.

“Rowing is a brutal sport…This is the kind of sport that will steamroll you physically and mentally. It takes a certain kind of mental toughness to get through a race…The coxswain is the voice that says ‘We can. You can. Let’s do it,’” Pelz said.

The Puget Sound men’s varsity team has a special bond—each member is important in their own way and they each contribute their dedication and skill to make the team a successful one. Because rowing requires everyone’s effort there is no single standout member, rather all 27 members put in all of their efforts.

Their first race will take place at the Portland Fall Class, which is a well-known regatta and a place for the Loggers to have a fun start to the rowing season and get a sense of their competitors.

“If anyone wants to come see us on the home lake this fall: American Lake, Lakewood. 8 a.m. Nov. 2. Be there! Bring warm layers,” Pelz said. 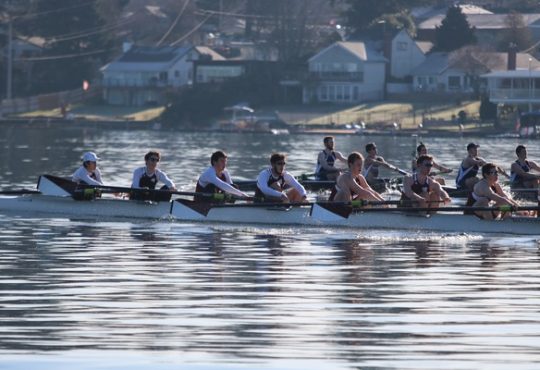