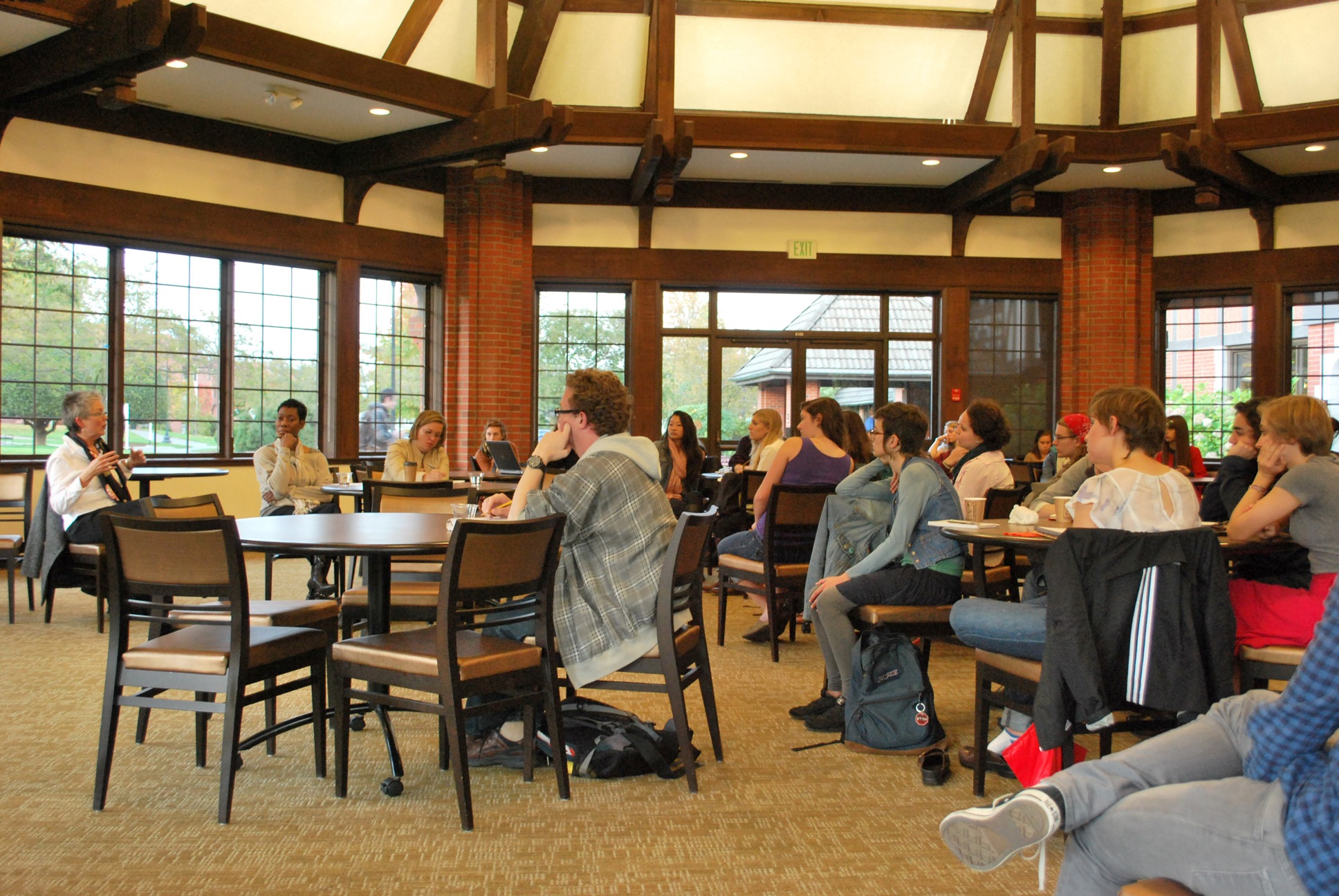 Following the candidates’ barrage of female-empowering rhetoric in the past few debates, students offered their personal reactions in a heated exchange of beliefs.

Not long after the closing statement of the second presidential debate on Tuesday, Oct. 16, Facebook and friends exploded, per usual, with sarcastic jokes poking fun at comments made by both candidates.
One popular jab was aimed at Governor Romney’s comment that he was given “binders full of women” to choose from in order to create diversity in his Massachusetts administration.
Whether or not this comment was deserving of such scrutiny, it reinforces the fact that the issue of women’s rights has become a point of interest in the election.
Puget Sound’s Gender Studies department sponsored an event entitled “A War on Women? Gender and the 2012 Election,” which sought to address women’s rights and gender issues in the context of the presidential election through discussion and passionate venting.
The three chosen speakers, though all women, came from all different areas of expertise: Professor Alisa Kessel specializes in Politics and Government, while Susan Owen is a professor in Communication Studies, and Renee Simms, a visiting professor, teaches African American Studies.
The audience, as one might expect, consisted mostly of females, but there was a respectable number of male students who showed interest and participated actively in the discussion as well.
Ultimately, the meeting served as a discussion of concerns and a call for action.
Simms said that she was worried about how “retrograde” she thinks these attacks on women’s rights are.
“Both campaigns fail to fully embrace women’s rights in a way that reflects contemporary realities,” she said.
She also acknowledged that these attacks could have been possible due to things left undone in the second wave of feminism (which occurred roughly between 1960 and 1990).
Similarly, Owen, who identified herself as the closest to second-wave feminism, opened her portion of the lecture with what was almost an apology for the mistakes made in that particular movement.
“We made mistakes in assuming that liberal white women were in a position to set the agenda for all women,” she said. “Third-wave feminism,” Simms said, “forces us to think about the intersections between race, class, gender, sexual orientation, and the economy, for example. I think both campaigns could do a better job of showing that women’s rights are integral to the issues that they discuss.”
Students in the audience didn’t fail to voice their concerns with the complexity of fighting for women’s rights.
One audience member said that politically, women’s choice and the sanctity of life are often placed on different sides of the spectrum when they may not necessarily be opposites.
“It’s an important distinction, and I feel like it’s muddling up a lot of conversations because I’m definitely pro-choice, but I can also understand how painful it is to see someone killed,” she said.
When the student asked if the speakers saw any solution, Owen responded, “Complex problems require complex solutions,” part of which, she said, was education.
Simms acknowledged her point of view and provided a grain of hope, saying, “Your question begins the process of coming to a solution, which is to reframe it, not to think of it as these two opposites.”
Another audience member was concerned that even women didn’t seem to be very interested in women’s issues and felt that little progress was being made.
“This is the reality of all political changes ever … These shifts aren’t going to be snappy little fast things, and so I feel the frustration,” Kessel responded, saying.
Owen endorsed the idea of being a “cheerful pessimist” and brought light to a seemingly grim situation saying, “The good news is the pushback tells us that we’re actually making progress, because you get this level of pushback when you are a genuine and sincere threat.”
As Owen ended her speech, she tried to demystify feminism and female empowerment which, in cinema, is often depicted with images of bra-burning or brandishing firearms and donning garter belts.
“The nitty-gritty business of political activism … is not always sexy, it is not always dramatic, it is a day-in and day-out how you live your life kind of thing, that stuff doesn’t always make for Hollywood film, but that is what it takes in order to support a human rights movement,” she said.
Owen advised students to be “cheerful pessimists,” fighting daily and looking for progress in a slow-moving process.