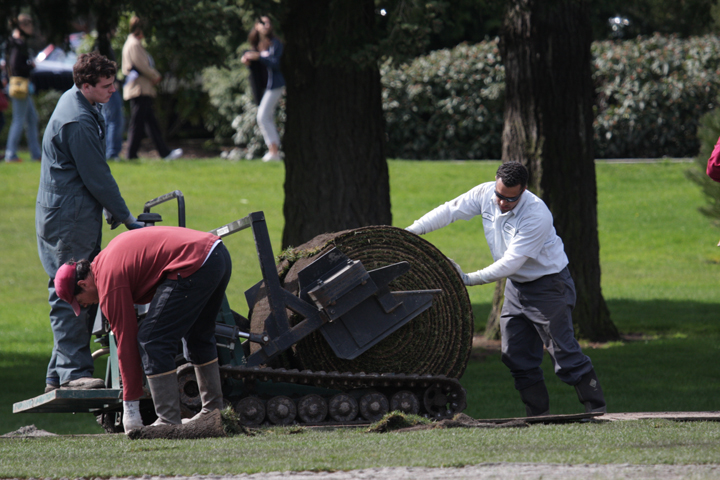 From now until the end of the academic year Todd Field is closed while it is being renovated as a result of damage done to the field.

Besides students who spontaneously play ultimate Frisbee or lounge there on a sunny day, students involved in intramural sports, like soccer, kickball and softball, are also affected by the closure.

“This year we’ve had a tremendous amount of use and rain on the field so what’s happened is the grass got pulled up and it essentially became a mud pit. It became unplayable and unsafe. Because we [the University] use it for graduation and other functions, it’s best to start repairing it now,” Associate VP for Facilities Bob Kief said.

Facilities pulled up the grass and mud and laid sod so that the field looks good while under repair. Because sod requires a shorter recovery time compared to seed, Todd Field will be ready by graduation.

According to Director of Athletics Amy Hackett, kickball and softball are moved to East Field based on availability, while soccer will now take place in lower Baker Stadium as well as Warner Gym.

However, there are some restrictions when using East Field in order to prevent damage. For example, students are not allowed to wear cleats and games will not be allowed on days where it is exceptionally muddy or rainy so as to avoid ruining the field.

“Players may assume that Intramurals have come up with some of these standards or last minute changes and feel we are unorganized, however we had no choice in these changes. It was the school administration,” Supervisor/Sports Official for intramural sports Krystle Vasquez said.

Despite these restrictions, Vasquez says that student involvement in intramural sports has not been affected, and she thanks Coach Justin Lunt and Coach Brian Billings for obtaining East Field for intramural use.

When asked if the closure of Todd Field raised any concerns as far as scheduling games and practice, Hackett responded, “At this time of year we don’t use Todd Field for anything other than intramurals. The only impact is the possible damage to East Field but we are trying to take measures to mitigate that issue.”

Vasquez said, “We have currently rescheduled all the games that were originally set for Todd Field to the East Field. Initially this was a major stressor to the staff, however Intramural staff, specifically the supervisors, did not have to make any changes. We made a smooth transition to the other field. As for the future I do not foresee this being a major issue. Todd Field should be fine by next fall. The University just heavily stressed the closure of it due to commencement activities this coming May.”

Despite the initial stress from rescheduling and relocating, Vasquez said that the change in location was, overall, a positive change.

“The East Field is a nicer field and it’s in a remote location so our sports, currently softball and kickball, won’t interfere with students walking past Todd Field.

There have been times in the past where non-Intramural players passing Todd Field have almost been hit by a softball, so in general the new location is safer with less interference,” Vaszquez said.

However, if you enjoy dodging the occasional rogue softball or soccer ball as you walk by Todd Field, do not to worry, because come fall the field will be open once again to the intramural athletes, ultimate-frisbee enthusiasts and sunbathers of Puget Sound.