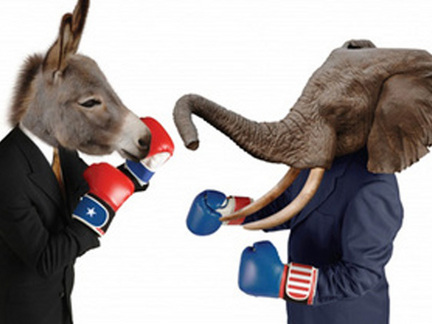 Reflecting back on America’s last national election, it is difficult for me not to smirk.

“We gave you Democrats a chance,” said America shrewdly, “so now the Republicans get another one.”

It is astounding that the voting demographic seems so fixed on one of these two parties being the solution to the problems within government and within our society – the product of a fallacious yet almost universally believed false dilemma.

“Functional fixedness” is a psychological term, defined as a “cognitive bias that limits a person to using an object only the way in which it is traditionally used,” or “mental block against using an object in a new way that is required to solve a problem,” by Gestalt psychologists. The term, however, is not limited to physical objects.

For example, one undergoes functional fixedness when a certain diet is attempted over and over, only frustrating results occur and it is assumed that one simply cannot lose weight. One undergoes functional fixedness when one tries repeatedly to repair his wireless connection, simply by clicking “Connect/Disconnect,” and becomes frustrated with the fact that his internet is just being so fickle, often leaving it and then coming back to try the same strategy again.

One also undergoes functional fixedness when, again and again,  one vote for one political party or another — one generalized agenda or another, one externally-implemented sense of identity or another — that has both failed in its endeavors towards utopia and bred unfounded prejudice and bias into one’s own thoughts, judgments, and ideas.

Americans do not understand that nothing is going to change or progress if we consistently apply failed solutions or if we continue to think in the directions that inevitably lead to the same policies. Neither the Democratic or Republican system is right in its overall approach to the social problems of today.

A step in the right direction would be the dissolution of these two sovereign parties, and the dilution of the bias within our citizens that clouds over reality and hinders the application of reason.

The Democratic and Republican parties are unnecessarily polarized. This nation is incredibly diverse; however, by lumping ourselves into one of two broad political divisions as we do and identifying as a member, its people are shaped by the inner desire to belong to a group – especially a powerful group. In this way, your choice of party may influence your personal beliefs as much, if not more, than the other way around. Your party is not representing you — you are representing them.

Independent (non-party) candidates for higher office deserve more attention and support in our political system – they not only show courage and faith in not affiliating themselves with the two-party system that has ruled supreme since 1852 (the one area in which Democrats and Republicans never fail is winning elections), but wisdom.

Certainly, making such a shift will be difficult, but times are more dire now than ever, and we cannot afford to wait any longer for change.

Independents, simply in the act of being an Independent, acknowledge that one must think outside the box and deviate from tradition to find the most effective solutions for the tribulations of both today and tomorrow.

Every independent — by definition, every individual in America — has one thing in common: we are all humans, with human emotions, human desires and human needs.

We can inevitably agree on that fact, I believe, and that it is the first step to uniting our nation and leaving this stupid, silly game in the childhood memories of our country’s history.