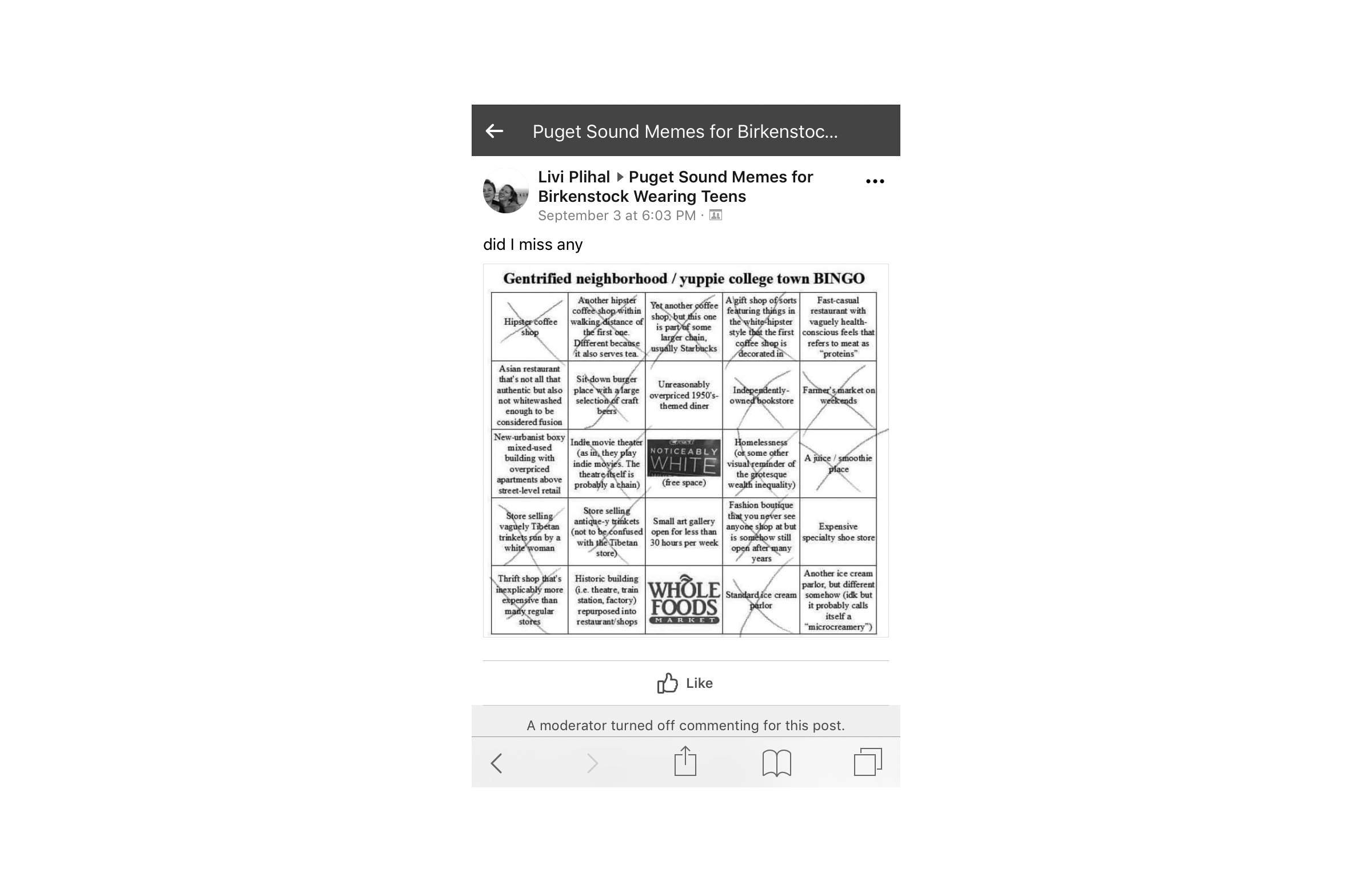 In the middle of the 2018 Spring semester, though it seems like it was much earlier than that, a certain Facebook page took campus by storm. “Puget Sound Memes for Birkenstock Wearing Teens” now sits at 1,204 members, and that number grows each day. All 1,204 of us have Maya Sealander ‘20 to thank for this phenomenon.

“It was an idea I’d had since I was a freshman here. It took me a year and a half to actually make the page, though. I was sitting with my friends and I just thought: let’s create a meme page,” Sealander said.

Despite the page’s young age, it feels as though it’s been a part of campus culture for a long while. The memes that are posted to the page are intended to relay the experiences of not only college students in general, but Puget Sound students specifically. Jokes about incessant lawn mowers, President Crawford’s numerous nicknames, and the strife of STEM majors are all enjoyed regularly on the page.

But inside this space that has been created for humor and student relation, controversies and arguments can emerge as well. The rules of the page are simple: “Keep it Puget Sound related, don’t start s—-.” As with any platform of interaction between people, this page should be open to criticism and debate just as well as humor and fun — but with sophomore Livi Plihal, that wasn’t the case.

On Sept. 3, Plihal posted a meme titled “Gentrified neighborhood/yuppie college town BINGO” (pictured on the right). While hilarious squares with traits like “Thrift shop that’s inexplicably more expensive than many regular stores” and “Farmer’s market on weekends” that apply with brutal accuracy to the North End area were on the bingo card, so were some more politically charged, but no less accurate assertions. “Store selling vaguely Tibetan trinkets run by a white woman” and “Homelessness (or some other visual reminder of the grotesque wealth inequality)” stand out, as well as the free space in the middle, a picture of a toothpaste advertisement with the words “Noticeably White.”

My friends and I found the meme painfully hilarious in its accuracy. After all, the funniest jokes often have much truth sprinkled into them. But the post sparked a debate on the page that has me wondering, months later, about just what is and isn’t allowed to be posted there.

Unfortunately, many of the argumentative comments have been deleted and I was unable to access screenshots, but many of the members were unhappy with Plihal’s omission of the fact that only the North End is described in the meme.

Plihal had this to say: “People’s reasoning was that ‘not all of Tacoma is like that, this is just Proctor. It doesn’t even apply to Hilltop or Downtown. The poster of the meme didn’t mean everywhere.’ And I replied to the comments saying: ‘Yes, yes I was. And you shouldn’t be mad that I’m saying this.’”

The end result of the arguments was that the moderators of the page deactivated all comments on the post, and Plihal herself was removed and banned from the group. She did not want to reveal the identities of the moderator(s) who banned her, but that is beside the point anyway.

First and foremost, the students who argued against Plihal had a number of holes in their boat. Gentrification, by definition, does not apply to a whole city. It applies to the poorer or nonwhite (most of the time both) areas like Hilltop, which is most definitely experiencing gentrification. When white people move into a primarily POC, low-income neighborhood and start to literally set up shop, that’s gentrification. I’m pretty sure that when they move into an entire city or nation and do the same thing, it’s called colonization — and that’s why we see Whole Foods in Harlem and Lime Bikes in Hilltop.

Plihal was banned for the posting of a meme that opened a primarily white and middle to upper-class student body to criticism, and they responded by shutting her out. That tells me that the nature of this page is not what it should be. Instead of a place where we can not only laugh but also talk about our issues and privileges as a campus, it is a place where the rule “don’t start s—-” is seemingly enforced in order to protect a spoiled student body from reckoning with the consequences and reality of the way their society has been shaped.

Based on this alone, it’s clear that allowing meme pages to be places where humor and only humor is circulated, and insightful discourse on issues like gentrification are punished, retains an ignorant status quo. Utilizing humor to challenge problematic ideologies is one of the best ways to get people to listen. Not only is there no wrong space to have critical discourse in the first place, but there’s no better place to have critical discourse than a meme page: the last place a comfortable, privileged student would expect to be challenged.