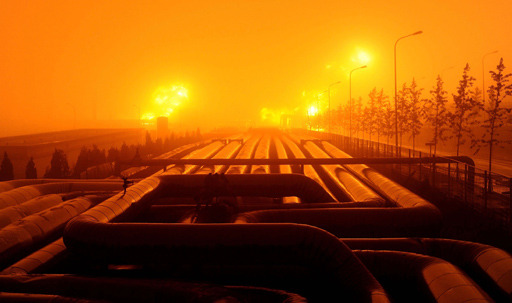 On April 20 the Deep Water Horizon oil rig burst into flames and sunk into the ocean, exposing the Macondo oil well in the Gulf of Mexico sea bed. Oil leaked for months until it was finally plugged on Sept. 19. On Aug. 5, a mine collapsed in Copiapo, Chile, trapping 33 miners miles below the surface. After months of drilling, they were rescued by Oct. 16.

For much of the past seven months, these two stories have been relayed endlessly, and their links to industrial development, global ecology and labor hardship and heroism made clear. Yet two concurrent and uncannily similar events in China received little more than a passing glance in popular media outlets. The timing, striking commonalities and the discrepancy in media representation of these parallel disasters need explanation.

On July 16, a pipeline at the Xangang port in Dalian, China ruptured and sent more than 400,000 gallons of oil into the harbor and Yellow Sea, polluting a surface area of 165 square miles. On Oct. 16, an explosion at a coal mine in Yuzhou City, Henan Province trapped and eventually killed 37 miners. Both events were reported by the BBC, New York Times, Reuters and the Xinhua News Agency (China’s state-owned media hub).

Nevertheless, after brief notice of the incidents, coverage seemed to stop or turn into the occasional update. Doubtless few people can remember the Chinese incidents, whereas the Gulf Oil spill and Chilean mining stories were primetime news for months. The fever just never caught.

What are the conditions that resulted in this discrepancy of media coverage and public attention given to each pair of events? In the oil spill cases, magnitude and differing expectations for industrial accountability/safety certainly contributed to the discrepancy. In the United States, British Petroleum (BP) was deemed (ir)responsible and more recently, neglectful of its legal obligations. The national narrative became one of a trans-global corporation violating its privilege by transgressing the American public and maritime ecology, localized to the Gulf coast region.

On the other hand, the incident fault, exact ownership of the Chinese petroleum company at Dalian and the degree to which accountability will be assigned are murky.

“After all, the pipelines and oil field where the explosion occurred are run by a state-owned company, the China National Petroleum Corporation, further blurring the lines of responsibility,” an article by the Financial Times of London said.

The public outcry and mobilization also differed remarkably. Whereas the Coast Guard was deployed to stop the oil spill into the Gulf of Mexico and used booms, oil tankers and skimmers to clean the slicks, in China fishing dingies and volunteers with buckets were dispatched to solve the problem by hand. Oil leaked for 10 days at Dalian, and five months in the Gulf.

Although China’s spill was the worst yet in terms of volume leaked and regional impact, its media circulation was limited by the issues of responsibility and censorship, since the refinery was state-owned and the Xinhua agency tends to filter the scope if not quantity of domestic news coverage, especially that which might reflect negatively on Beijing.

Conversely, the Gulf oil spill affected a region that had already been devastated by Hurricane Katrina, and acquired a political pallor as President Obama’s response was weighed in light of the coming mid-term elections.

The mining disasters, notable for their coincidence and resemblance, offer another perspective on this issue. Whereas all 33 miners at the San Jose mine in Chile were rescued, and their plight hailed as a national cause around which Chile could unite, the 37 Chinese miners, who were at first trapped, all died because of toxic coal dust released by an explosion.

The Chilean incident turned into a triumph and was politicized by President Sebastian Pinera to the effect that the saga ushered in a new era of unity and increased mining safety in Chile.

Nevertheless, authorities limited reporting on the Yuzhuo incident as China’s press freedom and the reach of government oversight were tested by the precedent of openness set by the Chilean situation. Many reasons prevented China from reporting on the exact details of the event, such as its dismal industrial mining safety record.

“China’s mines are the deadliest in the world, due to lax safety standards and a rush to feed energy demand from a robust economy. More than 2,600 people died in coal mine accidents in 2009 alone,” the Times of India reported.

Ultimately, the root cause of limited coverage could be drawn to the controlling role that media censorship plays as China gains economic power and lumbers onto the national stage. Yet, as a result of this hasty style of advance, the likelihood that ecological disasters will occur increases.

The quantity of fiscal and human capital boasted by China, as well as the suppression of individualizing narratives that run counter to Beijing’s self-image, diminishes the attention payed to and sustained in that corner of the globe by major international media outlets.