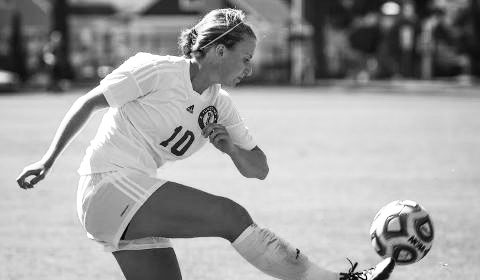 The team faced the Whitworth Pirates at Puget Sound on Oct. 18.

After losing to the Pirates 1-0 just two weeks prior, the Loggers started off the game strong, determined to seek their revenge.

The goal, assisted by junior Jordyn McLuen (Renton, Wash.), was deflected off a Whitworth defender and fired into left side of the net.

The second goal was also scored by Acorda-Fey 41 minutes into the first half, which accounted for her fifth and sixth goals of the 2014 season.

The third and final goal was scored 18 minutes into the second half by junior Cassie Winter (Seattle, Wash.) and assisted by Vieira.

In terms of her goal, Winter says it’s always nice to be able to put one away.

“In a situation like this, it feels like it’s a goal for the whole team,” Winter said.

“It’s credited to all the work put in by everyone in order to get a player into that position.”

The Loggers managed to keep the Pirates shutout for the remainder of the game, ending with a score of 3-0 to rewrite their previous loss against Whitworth.

The Loggers got nine shots off during the first half and 10 in the second half, while the Pirates only took a total of two shots.

Both shots on goal were unsuccessful and were taken within the second half.

“It was really cool to see that the team responded in the way we did,” Winter said.

“We focused on the changes we needed to make and everyone was disciplined in carrying out their individual roles and battles.

“Being able to see tangible improvement with such a quick turn around was so fun to be apart of and a testament to the strength of the program.”

The Loggers were again looking to rewrite over their previous loss against Whitman on Oct. 4.

They continued the trend of shutting out their opponents, winning the game with a score of 1-0.

The sole goal was scored by Acorda-Fey 15 minutes into the first half, which brought her up to a total of seven goals this season.

The unassisted goal was shot from the top of the box after Acorda-Fey had dribbled it 20 yards up the field.

Jonsson led the Loggers with four shots out of their 12 total, while the Missionaries were only able to get off two shots both only in the first half. With Puget Sound’s strong defense led by junior Liz Blonden (Seattle, Wash.), sophomore Emma Donckels (Los Altos, Calif.) and McLuen, Whitman’s chance of scoring was slim.

The Missionaries were not able to take a shot during the second half.

Junior Haley Rosenberg (Lake Oswego, Ore.) received the only yellow card of the game 42 minutes into the second half.

Although the Loggers received a yellow card, the Missionaries still led with 12 fouls, two in the first half and ten in the second half.

The Loggers next travelled to Salem, Ore. on Oct. 25 to play the Willamette Bearcats.

The Loggers had previously defeated the Bearcats 5-2 on Sept. 28.

During the first half, neither team managed to score.

The Loggers took charge throughout the second half.

Just four minutes in, Vieira scored an unassisted goal, and shortly after Acorda-Fey followed with the second and final goal of the game, which was assisted by first year Jacquelyn Anderson (Renton, Wash.).

This accounted for Vieira’s fourth goal of the season and Acorda-Fey’s eighth.

The Bearcats did not score during the second half.

After shutting out three conference teams, the Loggers remain ranked number one in the Northwest Conference.

They will take on the Linfield Wildcats on Nov. 2.