A discourse on female sexuality in pop culture

As our generation of third-wave feminists continues its discourse on sex-positive behaviors, the most obvious celebrity of interest has quickly become Miley Cyrus.

As tracks from her new album, Bangerz, which dropped Oct. 4, climb the iTunes charts (the album itself hit the number one spot within hours of its release) the already notorious pop star has made even more headlines through her feud with 80’s pop singer Sinead O’Connor.

The circumstances of their dispute involve a series of open letters penned by Sinead O’Connor, the first of which O’Connor released on her webpage in response to Cyrus’ claiming her as a musical influence.

O’Connor reached out in a somewhat problematic letter, encouraging Cyrus not to “let the music business make a prostitute of you [… or] let them make a fool of [you].”

Straight out the gate, O’Connor qualified that she felt the need to write the letter “in the spirit of motherliness and with love.”

As I read those words, I knew exactly the kind of letter I was gearing up to read.  I think it fair to say that many of us, as viewers and participants in a popular culture that emphasizes provocativeness and comedy alike, joked that Cyrus needed guidance of one sort or another after her glorious teddy-bear-studded stint on the VMA’s stage this year with guests Robin Thicke, 2Chainz and Kendrick Lamar.

But this letter left me wondering —did Cyrus really need to be shepherded towards a more conservative existence?  And is it so absurd to expect a 20-year-old woman to answer to a distant, self-proclaimed mother figure for how she chooses to display her body in the limelight?

To help me answer this question and the others provoked by the letter, I spoke with English and Gender Studies professor Alison Tracy Hale.

Hale commented on the tone of O’Connor’s letter, “I thought it was incredibly infantilizing. I mean, it seems to me that the one thing that Miley Cyrus and women of her generation want is to have their right to that kind of self-determination, even if that includes self-exploitation, respected.  And it seemed to me that Sinead O’Connor was taking this weirdly maternalistic, but also paternalistic, attitude toward her.  She talked about her as if she was some sort of fragile flower who had to be protected from the realities of show-biz.”

Regardless of Cyrus’ status of childhood celebrity—for instance, I believe there would be far less uproar over the “Wrecking Ball” video, had it been made by Rihanna instead—and how one may or may not feel about her behavior, O’Connor’s letter denies her  the autonomy Hale spoke of.

Cyrus is old enough to choose how she displays her body to the public. In a generation that is making strides toward sex-positive discussion and shying away from blaming women for the hyper-sexualization of their bodies, this denial is problematic at the very least.

Some columnists have gone as far as to associate O’Connor’s letter with slut-shaming, and even victim-blaming agendas—in one section O’Connor does allude that men will not care about Cyrus if she gives the impression that she does not care for herself.

This sort of rhetoric is problematic for a number of reasons, the first of which is that it paints men as evil, a viewpoint that has not been current since the second-wave feminists in the 1970s.

Secondly, it once again assumes that Cyrus and women like her lack agency, and that somehow, their self-worth is reflected by what they choose to wear.

By this logic, O’Connor’s letter reinforces society’s judging a woman based on her choices in regards to clothing and body image.

Senior sociology and anthropology major and Wetlands staff member Erika Barker summed it up well: “[…] O’Connor claims, ‘We don’t encourage our daughters to walk around naked in [the world] because it makes them prey for animals and less than animals […]’ Not only does that seem to place part of the blame on victims of sexual violence and exploitation, but it denies that men have any self control. [They do!].”

I do not mean to say, however, that O’Connor has done anything completely unforgivable by writing this letter. There are many positives to the questions she raises against Cyrus’ behavior.

“What I love about O’Connor’s letter is that she continuously emphasizes the fact that Miley Cyrus is talented enough that she doesn’t need to act ‘sexy’ to be successful. I think that’s a great message,” Barker said.

In particular, much of the sensitivity surrounding this issue stems from the miscommunication between the second and third-wave feminist movements.

Hale commented on the number of relevant discussions that our society misses out on as a result of sensationalizing events in pop culture into less encompassing discussions, and bottle-necking them into more minute questions, like that of slut-shaming.

“Both slut-shaming itself and naming something as slut-shaming, tend to cut down the discussion and just eliminate it,” Hale said.

Perhaps this is why when Annie Lennox, solo performer and former member of the Eurythmics, stepped forth with her own open letter, it was not addressed to any artist in particular, but objected to the “highly stylized pornography” in today’s pop music videos.

Lennox and O’Connor are both representatives of a cultural movement that strove toward androgyny for the sake of being recognized for their musical talents alone; the phallic imagery of Cyrus licking a hammer accompanying an emotional breakup song could thus be construed as an affront to everything they accomplished.

There is certainly a thin line between objectification and sex-positivity, over which Cyrus seems precariously balanced.

“I think the problem with Miley’s self-presentation in videos like ‘We Can’t Stop’ and ‘Wrecking Ball’ is that she seems to be performing her sexuality for the people watching the video, a feeling I get every time she looks directly into the camera while posing or moving in a provocative way. Her sexuality seems to be much more about pleasing her viewers than pleasing herself, and that’s why it doesn’t seem like a particularly sex-positive message to me (sex-positivity being the idea that people deserve to fully and deeply enjoy their sexuality as subjects of desire rather than objects),” Barker said.

“In that way, I do think the videos contribute to the objectification of the female body; objectification is partly the idea that a person’s body exists for the pleasure of others rather than one’s own pleasure. I think it’s also a problem that Miley’s intentions in that self-presentation are unclear. It doesn’t seem hard to imagine a teenage girl watching that video and believing that she HAS to act that way in order to be desirable, and that her sexuality is not really her own, even if that’s not what Miley in any way intended to express. On the other hand, I think the debate is really complicated, because some people would argue that it can be really empowering to objectify oneself in some situations,” Barker continued.

Though the discourse on these letters seems intertwined with the actions of a small number of characters, I think it is important to recognize the greater impact it should have.

The fact that we as a culture are so preoccupied with the behavior of one female childhood Disney-star-turned-pop-music’s-front-page-sex-story is indicative of so much more than a concern with Cyrus, twerking or the cultural impact of the Bangerz album.

As Hale said in closing, “[the issue is] less about whether Miley Cyrus has some sort of responsibility to the culture, than whether or not there’s a variety out there of models for young women who don’t feel that the best way they can empower themselves is to yank off their clothes.  It’s not, to me, about whether the videos are offensive or appropriate.  It’s about the lack of other options and models out there, so that all of our cultural attention gets fixated on this one naked girl swinging around on a ball and chain.” 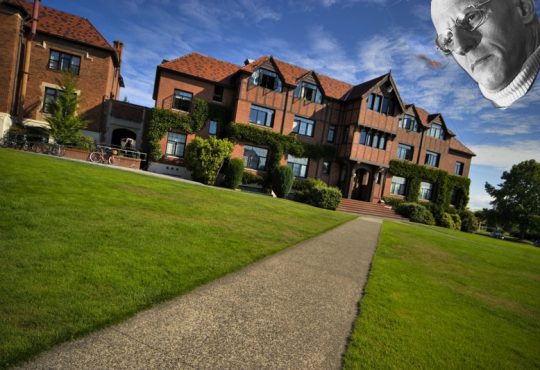