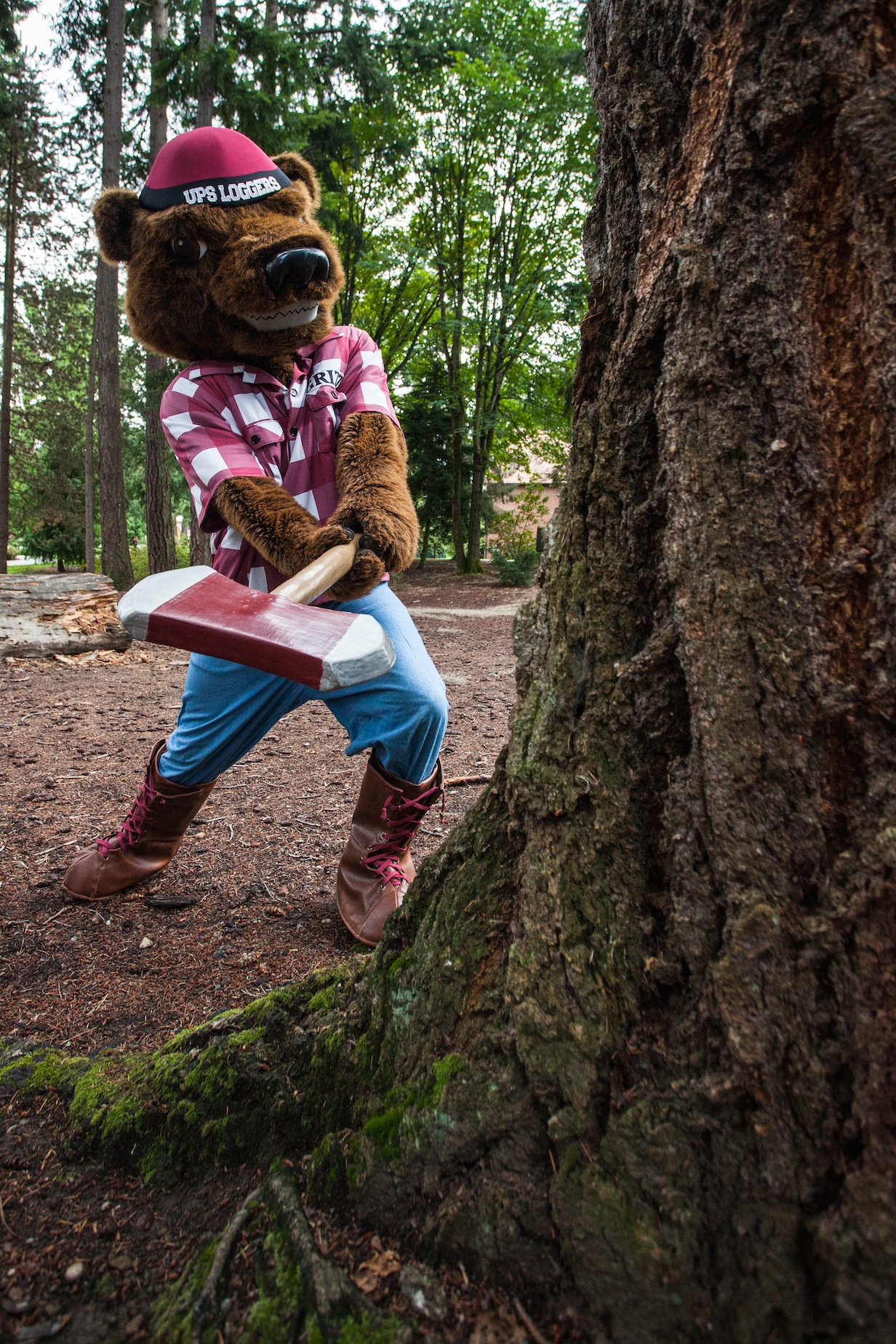 Grizz T. Logger was not always a logger. Once, he was a happy tree-loving bear, living out his days in peace with his bear-girlfriend Liz, deep in the woods of Dosewallips State Park.

Every day they ventured out of the forest, caught salmon from the river together, got rip-roaringly drunk on fermented juniper berries and then proceeded to have ferocious intercourse.

Those were his good days, the days before Grizz betrayed his friends of the forest and became the abomination of man and bear (not pig though) that he is today: Grizz T. Logger.

“What does the T. stand for,” you dare to ask? Taco. But that will be explained later.

One fateful day, Grizz returned to his bear-mancave to find his bear-girlfriend Liz mounted by an enormous black bear with illustrious flowing fur that only Fabio himself could possibly rival.

Grizz was so overcome by rage that he immediately went for Fabio’s jugular, tore it out and choked his bear-girlfriend with it until, finally, she breathed her last bear-breath.

He then let loose a roar of triumph mixed with unfathomable sadness that would have inspired Shakespeare, were he alive, to write his very first bear tragedy.

Before Grizz met Liz, he used to meander into the woods at night in search of something extraordinary.

During his wanders, he came across a group of young cultists dressed in black, chanting and holding hands around an enormous fire.

He couldn’t make sense out of any of their words except for one that they seemed to repeat with mindless insistency: Satan.

The word had remained in his mind since that night and so out of his desperation, he mimicked the unholy word aloud as best he could until he thought it sounded right.

Suddenly, a cloaked figure materialized out of the darkness of his cave and asked Grizz what he wanted to become.

“MAN,” he growled again and again, until Grizz felt his form change—he no longer felt the need to crawl on all fours and stood up on his hind legs, feeling stronger and more confident with his new human physique.

The cloaked figure smiled at Grizz and disappeared as if he had never been there.

Grizz then went off into the forest again as he did so long ago, searching for something extraordinary.

Not long after, he heard axes chopping, chainsaws sawing and human voices chatting in a nearby clearing, and rather than fleeing as he used to, Grizz drew closer to watch the action.

A group of men in flannel shirts and hard hats were gathered around an enormous tree, which Grizz measured to be at least three times his size in width, and began to cut into it with a two-man-saw—after a couple minutes, he watched as the giant plummeted toward the earth.

He had never seen anything so awesome in his entire life, but he knew he could do better.

So Grizz strutted over to the men and, without saying a word, picked up a nearby axe and felled the neighboring tree with one mighty “WHACK.”

The loggers were elated, hooting and howling at Grizz’s strength, so Grizz bared his fangs into what he thought to be a smile and continued his frenzied treeicide until the entire forest was gone.

After a hard day’s work, Grizz was rewarded with a rotund logger’s spare outfit and all the fermented juniper berries that he could ever want—that is, as long as he kept chopping down trees like a bear reincarnation of Paul Bunyan.

But all that was nothing compared to the sweet taste of revenge that each felled tree gave him.

The weight of pain that he felt whenever he thought of Fabio nailing Liz in his own home seemed to lessen with every forest he chopped down.

“So what does the T. actually stand for,” you dare to ask again?

It’s taco. No really, it is. The loggers gave him a taco for lunch that day and he loved it so much that it became his nickname.

But anyway, the vampire president of Pungent Sound, Tonald Rhombus, soon heard of Grizz’s amazing feats and was so inspired by his story that he chose him to be the school’s  new mascot in place of the former Mountain Mike-esque lumberjack.

Occasionally, Grizz T. Logger visits the campus to display his vehement hatred of all things innocent and good.

So try not to walk around campus looking too happy—otherwise Grizz might snap and there will be nothing, not even Tonald Rhombus, to stop him.

Well, except maybe tacos. He loves that shit.