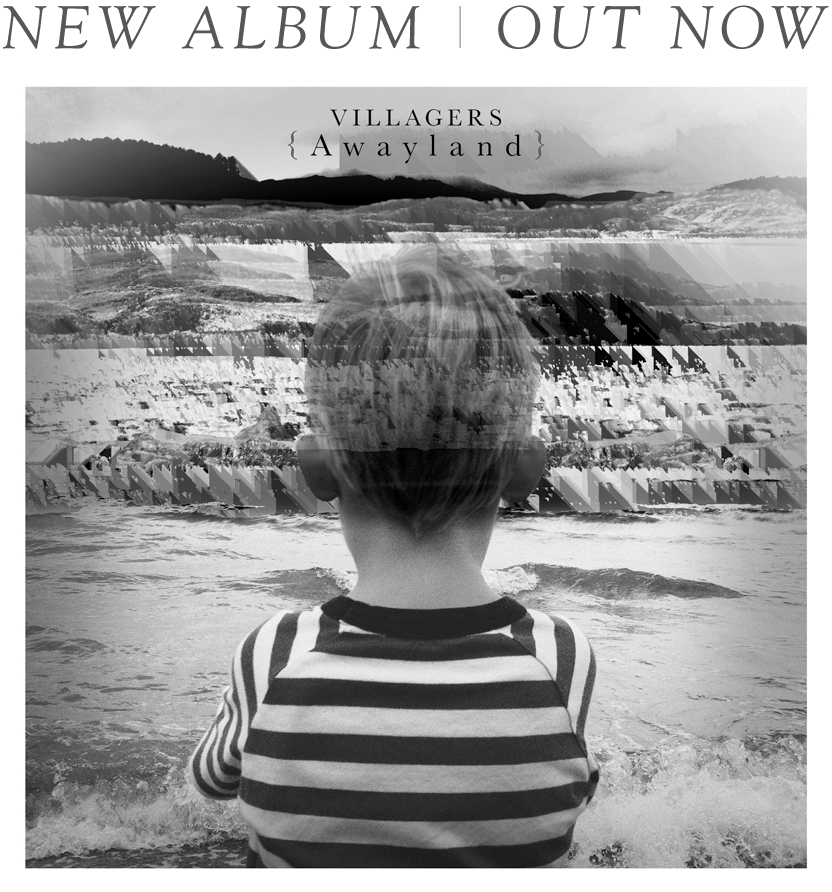 Villagers, a humble Irish indie folk band, recently released their second full-length studio album {Awayland}, following their first release in 2010, titled Becoming a Jackal. This first album was very well received by American, Irish and European audiences alike, as Villagers are currently the first and only Irish band to be signed by a renowned London and Brooklyn- based independent record label, Domino Records.
Conor O’Brien, the Villagers’ frontman, leads the band on rhythm guitar, lead vocals, percussion, synth, sample and beats, but because of the complex and diverse nature of Villagers’ repertoire, he cannot stand on his own. He is backed by the help of Tommy McLaughlin on lead guitar, mandolin and vocals (as well as being the album producer), Danny Snow on bass guitar, James Byrne on drums and percussion, and Cormac Curran on piano, organ, synth and vocals. They also occasionally incorporate saxophone, French horn and a full string quartet into their compositions.
Through the creative use of these many different instruments, Villagers successfully accomplishes what many indie/folk bands strive for in their originality of sound. Their work has been particularly well received in the United States due to their advantage of a different musical background and therefore a much different sound than many American indie/folk groups.
{Awayland}, was released in January of this year in the U.K. and Ireland and has received a strong “metacritic” rating of 83 out of 100. It currently holds peak position on the Irish Albums Chart and Irish Independent Albums Chart, and the band can count on the positive reaction from the United States to follow the release.
Villagers has been described as “acoustic melancholy done properly” by NME magazine, although their newer album has a wider spectrum of emotion and dynamic than the simple acoustic vulnerability that has become so popular. {Awayland} is a wonderful development from Becoming a Jackal, as O’Brien wrote and recorded Becoming a Jackal on his own. Because {Awayland} is a much more collaborative piece, it inevitably has a wider variety of sound because of the many talented minds that were put to work on it.
{Awayland} is made up of 11 songs, beginning with “My Lighthouse,” which incorporates pleasant harmonies and moments of pause in the music and seduces the listener to continue with the mellow and enjoyable journey of the album. Toward the end of the song though, it builds into more excitement and emotional charge as O’Brien sings passionately about the lengths to which he would go for a romantic interest, and touches the listener sweetly through his vulnerability.
The following song, “Earthly Pleasures,” is very different from “My Lighthouse.” It catches the listener’s attention with a short plucked guitar introduction backed by synth and lyrics that involve the blunt, unromantic sentence “naked on the toilet with a toothbrush in his mouth,” which gives the listener topical whiplash from the last song romanticizing love and the present song discussing the difference between “fat cats” and the destitute. In this piece, O’Brien attempts to show the listener the values of the internal as opposed to the external pleasures, as the title of the song suggests.
The title song of the album, “{Awayland},” starts off with a very mellow entrance, allowing the listeners time to immerse themselves in the sound. It then emphasizes beautiful, dreamy piano chords and the soft plucking of electric guitar.
The ethereal entrance of a violin’s high, solitary voice adds to the mystical effect of the song. Only two and a half minutes long, the song is a masterpiece of instrumental incorporation, as each instrument has its own independent path but all meld together seamlessly.
The following number “Passing a Message” is much more upbeat than the preceding song. It begins with a catchy guitar riff and leads into O’Brien’s haunting vocals over the steady instrumentals. This builds to a beautiful and satisfying chorus and instrumental breakdown, featuring Curran’s expertise on piano and Byrne’s on percussion.
{Awayland} is a wonderful compilation of some very talented and creative musicians, so if you’re looking for some indie folk that’s a little off the beaten path, look up {Awayland} on Spotify or at the iTunes store.