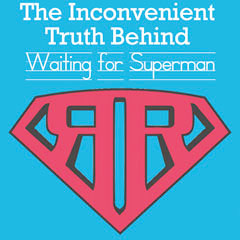 Charter schools are hailed by some as the solution to the public school system.

Others say that it undermines the public school system and ultimately hurts all schoolchildren.

Charter schools are both publicly and privately funded.

They are not subject to the same regulations as public schools are in exchange for accountability to produce certain results.

The film Waiting for Superman shows how charter schools could be a possibility to solve the public school system.

But the grassroots parents group Parents and Friends for Tacoma Public Schools disagrees. They made the film An Inconvenient Truth Behind Waiting for Superman to show how charter schools can undermine the public school system.

About 30 people, most from the community, attended the campus screening of the show and discussion.

The film showed charter schools in New York sharing the same facilities as public schools, called co-location and the impact it had on students, parents, and teachers.

Charter schools don’t serve the same population as the public schools do. The film showed how the corporate reform movement would hurt, rather than help schools.

Corporations control charters, instead of the parents and community, which was the original idea of charters. As one parent, Khem Irby said in the film, “Parents have no voice in the system.”

By showing the film, the Parents and Friends for Tacoma Public Schools hoped to raise awareness and to help parents think about the pros and cons of charter schools as reflected in Initiative 1240 which will be decided in Washington this fall.

The group is “dedicated to strengthening our public schools and providing a forum for parents to have a voice in the education reform debate,” as stated on the Puget Sound website.

After the film, there was a discussion with State Legislative Representative Marcie Maxwell.

She started by saying that she was tired of hearing public schools bashed so often.

Maxwell has a strong commitment to protect the public schools and believes that charter schools are not the solution in Washington state.

She would rather see improved funding for all schools. She says charter schools create a double bureaucracy. Versions of Initiative 1240 have been put on the ballot in the past, but all have failed.

Maxwell said that this version is the worst of all because of the “trigger” factor, which allows a school takeover whether the school is failing or not by a simple majority vote.

One woman said that if after a time at the school the student isn’t meeting the standards, the school might say, “You’re not meeting our standards, so you have to go.”

Another member of the audience, Tom O’ Kelley mentioned how he liked the parents’ passion from the movie, that you couldn’t get any better passion because the passion came from their guts.

He also said the scary part is that charter schools are free from some of the rules and regulations that bind public schools.

The problem is that they don’t state which ones.