Finding a Balance in Washington’s Water Use 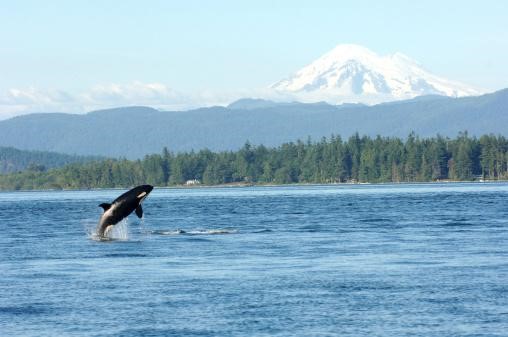 An ecosystem that only appears to be healthy Photo Credit: Istockphoto.com

Aquatic habitats and water resources are becoming increasingly important around the country as many states experience prolonged droughts with struggling ecosystems. Washington is no exception. Especially in the population-dense, Western half of the state, human water use directly competes with the health of aquatic habitats.

In Tacoma, residents see the Sound daily. The water may not look too bad, but looks can be deceiving. Puget Sound Info reports that many key features of the sound, such as freshwater and marine water quality as well as orca and salmon populations are declining or stagnating.

According to Peter Hodum, professor of biology, the signs of an unhealthy sound are multifaceted and often difficult to understand. “One of the challenges is that it is so nuanced, you know, you can point to success stories but you can also point to examples of species and systems that are really struggling,” Hodum said. He explains that the complexity of natural ecosystems makes remediation difficult. “You would expect that a response to human impacts would be correspondingly complex,” Hodum said.

A further complication to developing a response plan is the variation in what is considered a healthy Puget Sound. According to Hodum, the period of time, or baseline, in the past when the sound was considered healthy varies depending on the party involved. “Depending on when you grounded yourself in a place is going to influence what you consider to be normal,” Hodum said.

The reality of shifting baselines for what is considered healthy is especially pertinent for Puget Sound because of the variety of invested parties. Local tribes, the industries brought by the Port of Tacoma, and the people that live near, and use the sound all have different and sometimes conflicting beliefs over what healthy means for the sound.

Another challenge confronting Puget Sound’s remediation is the sheer population density of the area. According to Puget Sound Info, “Many common day-to-day household behaviors seem benign on their own, but when multiplied by 4.5 million residents, their cumulative effect can significantly harm environmental health.” Hodum gives the example of copper shed from brake pads in cars which, once in the sound, affect salmon’s ability to navigate back to the streams they were hatched in, an essential process for the stability of salmon populations.

Hodum stresses that a healthy Puget Sound must be able to accommodate the actions of humans. This understanding of ecological health goes against older models that emphasize preservation and try to take humans out of the equation. According to Hodum, the preservation logic is unsustainable. “It’s not going to work in the long run,” he said. Hodum elaborates that what the sound needs is, “a very inclusive process that is committed to equity, environmental justice, and human wellbeing.”

Further inland in Washington, away from the Puget Sound, water use is also a complicated subject. According to Wendy Welch, a hydrogeologist studying groundwater from the U.S. Geological Survey, balancing ecosystem health with human consumption is a difficult line to walk as climate change makes precipitation less predictable.

Especially at risk are streams, which rely on groundwater to keep a healthy flow rate when precipitation is not enough. According to Welch, it is a constant balancing act between human use of water and maintaining healthy flow rates in streams. “The biggest challenge for our state is trying to manage the competing demands for freshwater while meeting the instream flows for a healthy stream ecosystem,” she said.

On the Eastern side of the Cascades, the story is entirely different. While there’s less of a population using groundwater, the draw from agriculture is significant. According to Welch, “In those areas, there have been significant declines in groundwater levels and in some regions, there are also contamination concerns from nitrates that come from fertilizer application and dairy operations.” Nitrates in drinking water can lower the ability of red blood cells to carry oxygen– an especially dangerous health issue for infants.

Welch expresses hope in the ability of scientists and citizens to come to a consensus on water use. However, there’s a lot of work to be done to decide how water gets divided, especially as water resources become more vulnerable. Welch explained, “As our population grows, agricultural irrigation increases to meet demand, and the timing and amounts of precipitation become more variable and less predictable, we all need to treat our freshwater as a precious resource.”