The Trail
HomeSpring 2022Issue 7This isn’t D.C.
Issue 7Letters to the Editor 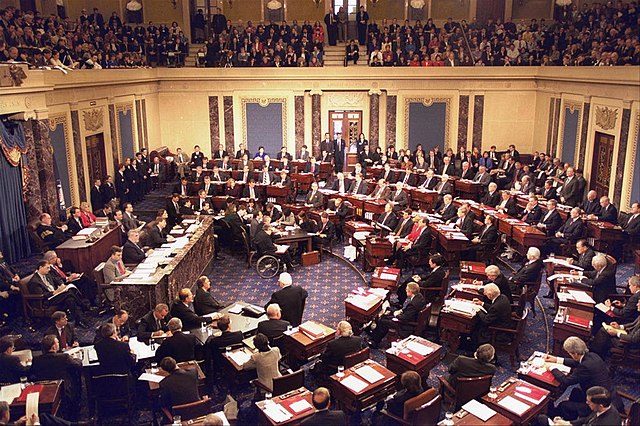 Floor proceedings of the U.S. Senate, in session during the impeachment trial of Bill Clinton Photo Credit: Wikimedia Commons

I feel that you and members of this campus should be aware of ASUPS’ refusal to pay student leaders for their hard work. I am the Senior Senator and also the Senate Chair of the ASUPS Senate. As Chair, I run the Senate. In addition to Senate, I work as the Art Director for The Trail and do both without getting paid. I am writing this letter to show that my voice will still be heard even if ASUPS will not pay me for my work.

My time in the Senate has taught me one thing, I HATE politics. Even worse, is when people pretend (or act like) ASUPS is the U.S Government. Currently, our ASUPS Constitution (yes, we really do have one) says that people in ASUPS can not “serve” in more than two branches at once. Technically, The Trail is part of the Executive branch and the Senate is part of the Legislative branch. This one sentence in our Constitution is why the Executive branch refuses to pay me for my work as Art and Layout Director for The Trail (a typically paid position). While I understand why this restriction to work across branches may apply to an editor, it confuses me why this same restriction applies to an Art and Layout Director – especially considering that a member of the Executive branch is allowed to get paid for a Director position and have a KUPS radio show.

When I pushed back against this explanation, I was told I can’t get paid because the Executive branch is too uncomfortable interpreting this clause in a way that puts accessibility at the forefront. My question is, what’s the point of this job if you don’t feel uncomfortable? If you are not uncomfortable in this job, you aren’t changing anything.

It is worth noting that I am currently serving in both positions—a direct violation of their constitutional interpretation of the clause. This ultimately highlights that the fundamental issue is about payment. In other words, the Executive Branch is comfortable with me doing this work, as long as I go uncontracted(unpaid).  The irony lies in the fact that since I am uncontracted, I am free to write this letter to the editor.

ASUPS can’t be approachable if everything is political theatre. We need to push ourselves beyond just mirroring an established government and try to grow into an organization people want to join. This growth starts with rethinking our priorities. Our concern should not be following bureaucratic rules simply for the sake of adhering to red tape when there are far more important issues to address on this campus.

Listening to student voices tells us that our first priority must be accessibility and inclusion. Students should not feel limited in the work they can provide to this university, rather they should experience support from its student government– as students, we have the opportunity to actually uplift each other in areas where the administration has traditionally failed us. No one is under any impression that we can change the big structural issues this university has in one year, but we can make sure supporting and uplifting our peers is the main mission. This goal needs to be at the forefront of whatever decisions are being made. If the decision or action isn’t putting the well-being of our peers above all, then it needs to be re-evaluated. The current interpretation of our constitution does not put students first.

We have to keep pushing ourselves and continue working to be better. I realize this is a big challenge and not something every person could take on, so I admire everyone on the executive team’s ability to step up to the plate. Actions will always speak louder than words, so don’t just say it, show it.