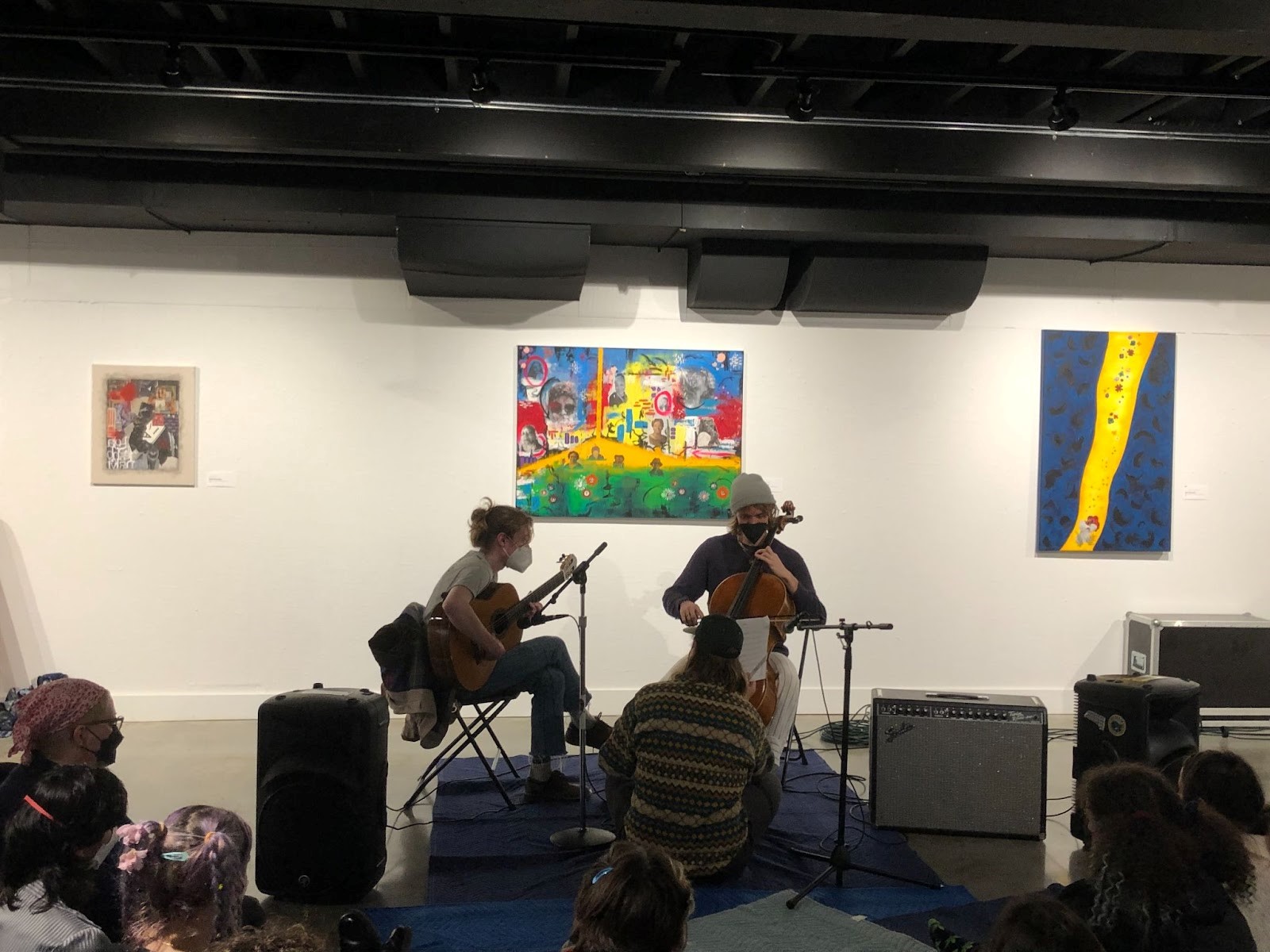 KUPS—Puget Sound’s radio station—fourth-year Willa Bartholomay, and third-year Tio Lloyd organized an open mic event on March 31 at Kittredge Gallery. “I really would love the gallery to be more of a community-centered space,” Bartholomay said. This intimate gathering of around 40 students included informal poetry readings, music, and a supportive audience. It also benefited from the backdrop of Kellie Richardson’s mixed-media exhibit. The event functioned to open up the gallery in a more interactive and accessible manner, as well as further creating a community on campus.

Another feature of the event was food collection for houseless people in the neighborhood. “Bring non-perishables, your listening ears, and something you would like to share at the microphone if you wish!” the KUPS Instagram announcement read.

The day before the open mic, Richardson, a Tacoma artist, and poet, introduced her gallery exhibit, “Realized,” in a vibrant reception at Kittredge. “My work is the unfolding of my voice, bearing witness to the possibility of life after self-loathing,” her artist statement describes. Richardson’s mixed media and collage art act as vital avenues for self-expression. And getting into the content, she wrote in her artist statement that her work “partners with subject, text and time to convey the varied and stunning truths of Black humanity.”

Gallery doors opened at 7:30 for the musical event, and performances didn’t start until 8, so as people trickled in they got to interact with Richardson’s art. The mostly abstract art featured bright colors and incorporated numerous photos of people close to Richardson. The collages went right down to my center and evoked emotion immediately in a way that I don’t often experience with visual art. The exhibit will be at Kittredge Gallery through April 16.

Bartholomay, a studio art major at Puget Sound, spends lots of time in Kittredge because of their major. But Bartholomay notices that students in other fields of study don’t engage with Kittredge very much. “I also feel like gallery spaces can be pretty exclusive and very kind of structurally feel like you can’t interact with them unless you’re being quiet,” they said. “I heard that an open mic was maybe happening through KUPS, so I was like, ‘hey guys, let’s do it in the gallery!’”

Bartholomay asked Richardson for permission to host an open mic within her exhibit. They see Richardson’s art as emphasizing expression and community, also centered in the open mic. So, in addition to being an opportunity for students to interact with the gallery in a different way, the art shared themes and undertones.

In the gallery, chairs and two benches were arranged in a semicircle around two microphones. As students shared their poetry and music, their peers gathered around them; with several people sitting criss-cross applesauce in front, a cozy sense of community radiated from the room. The music and supportive atmosphere reminded me of singing around a campfire at summer camp.

During the event, around ten students performed songs or original poetry. I enjoyed the event immensely for the high quality of the renditions which encapsulated joy, hardship, and resiliency. Though I enjoyed all of the incomparable performances, Aidan Lineaweaver’s vocals and guitar on his original songs stuck out. With assistance on background vocals, he sang “Wenatchee,” and “SunRiver,” beautiful and reflective songs.

Fantastic Fogman and Avi Grafback played guitar and cello at the open mic. They performed three pieces, ranging from woeful (I wrote down ‘walking down a Paris street sad at night’) to bouncy. Near the end of the event, several people read original poetry. One prefaced their reading by saying, “I apologize, it’s a little sad.” The piece fulfilled the expectation of sadness and in addition to the other pensive poems that followed, gave us time to reflect on what loss and hardship mean in our lives.

The open mic clearly gave the opportunity to share creative expression, but maybe more importantly, let the audience listen deeply to others and witness vulnerability. The human experience is different for each of us, and only through listening can we start to understand how others interact with the world. KUPS’s open mic brought 40 people together for an evening of visual art and sometimes boisterous, sometimes quiet music and poetry. I struggle to think of how it could have been more emblematic of community.